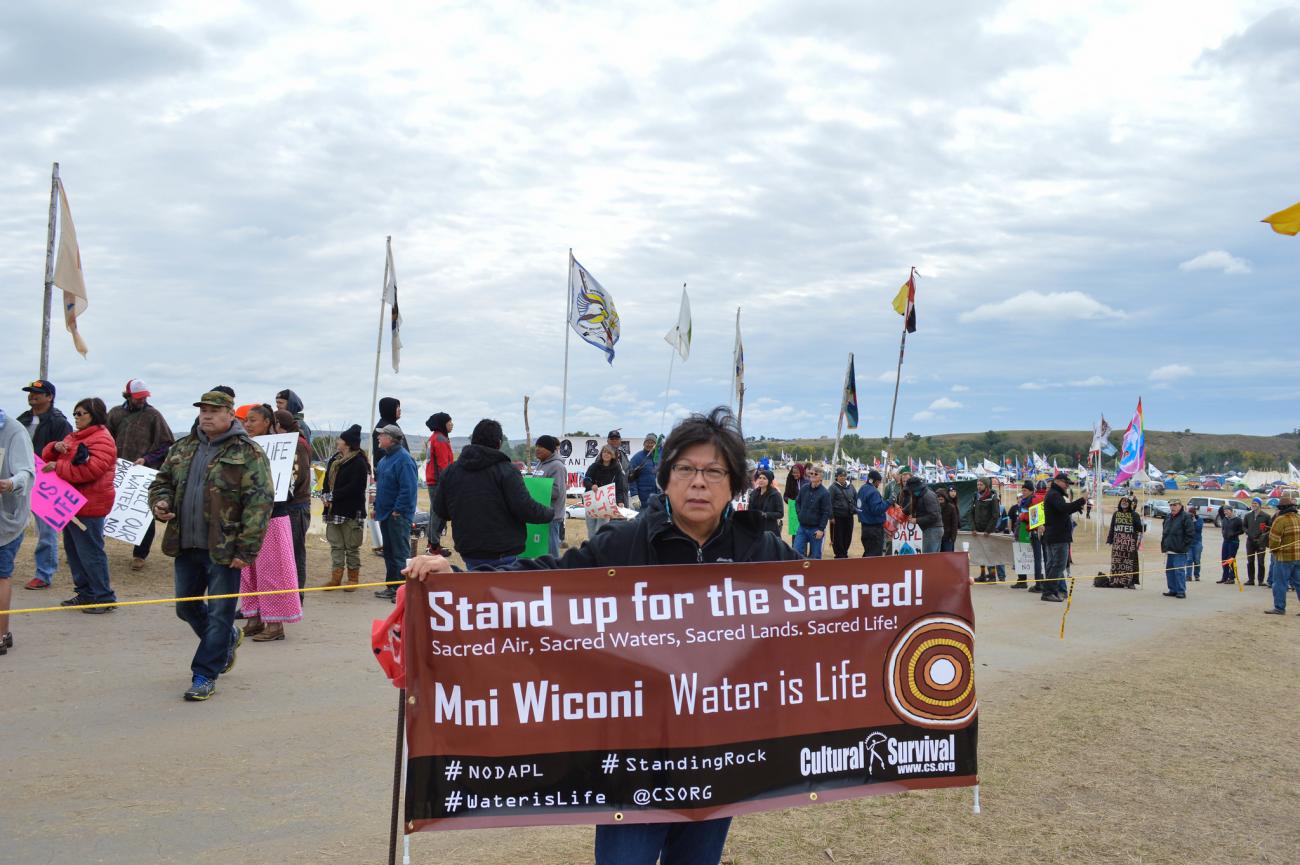 By Erica Belfi and Jesús Nazario

On July 6, 2020, Federal Court Judge James Boasberg issued a ruling ordering the infamous Dakota Access Pipeline (DAPL) shut down and be completely emptied of oil within 30 days. Given that DAPL has consistently threatened the ability of Indigenous Peoples in the area to maintain their relationship with their sacred, unceded lands, this ruling allows for some cautious celebration. The July 6th ruling ordered that the pipeline must undergo a substantial 13-month environmental review by the U.S. Army Corps of Engineers before proceeding with further operations. While the ruling to empty the pipeline does not necessarily signal a clear and decisive end to the fight, it does set a precedent for siding with the Standing Rock Sioux Tribe and the thousands of protesters around the globe who have pledged and shown their support. It signals a closer move towards Indigenous sovereignty.

Almost immediately (and expectedly), Energy Transfer Partners—the Texas-based company that owns the Dakota Access Pipeline—announced that they would not empty the pipeline, claiming that Judge Boasberg “exceeded his authority in ordering the shutdown” and will be pursuing “all available legal and administrative processes” to fight the order. In the most recent ruling on July 14th, a federal appellate court blocked the shutdown order, and is allowing the pipeline to continue operating during the appeal process. Jan Hasselman, an Earthjustice attorney, stated that the newest ruling is rather typical. “It’s important to recognize: an administrative stay is not in any way indicative of how the court is going to rule—it just buys the court a little additional time to make a decision.”

The pipeline’s controversy goes back several years, beginning with Energy Transfer Partners’ initial application to build the pipeline in December of 2014, and swelling into a well-publicized clash between water defenders, police forces, and the National Guard in November of 2016. The Dakota Access Pipeline is a $3.8 billion dollar, 1,172 mile long project that stretches across four states. The construction violated the Ft. Laramie Treaty of 1868, an agreement between the U.S. government and the Sioux that officially recognized the Sioux’s right to the land which the pipeline trespasses. Energy Transfer Partners’ Dakota Access Pipeline compromises Indigenous sovereignty—the inherent right of Indigenous People’s distinct practice of self-government and self-determination.

Additionally, DAPL endangers the Missouri river, Lake Oahe, and Standing Rock Sioux Tribal lands with the looming threat of oil spills. More broadly, DAPL represents the United States’ continued reliance on oil and resource extraction which drives increasing carbon dioxide emissions in an era of increasing public concerns about the climate crisis and urgent calls for an end to fossil fuel dependency by Indigenous Peoples and environmentalists. The pipeline currently carries approximately 570,000 barrels of crude oil per day. In June 2019, Energy Transfer Partners began their plans to expand the pipeline’s capacity, doubling the amount of crude oil to 1.1 million barrels per day.

The legal battle first started with the Standing Rock Sioux Tribe filing a lawsuit against the U.S. Army Corps of Engineers in August 2016. The lawsuit affirmed that the U.S. Army Corps of Engineers failed to adequately consult the Indigenous Peoples in the region before obtaining approval for the pipeline. The suit was denied one month later by U.S. District Judge James Boasberg, which would become a recurring theme in the following years. A full timeline of the pipeline’s key moments and rulings can be found here.

Cultural Survival welcomes the new judicial ruling that favors halting extractivism on Indigenous lands. Yet, we also acknowledge that Indigenous Peoples’ rights are indisputable, regardless of the legal rulings. The U.S. legal system has historically demarcated what are and what are not acceptable forms of self-determination since the Marshall Trilogy rulings, a series of Supreme Court cases that defined the paternalistic relationship between Native American nations and the U.S. settler-state. One of the three Supreme Court cases, Cherokee Nation v. Georgia, specifically ruled Native American nations as “domestic dependent nations” in 1831. Since then, the U.S. settler-state has continued its paternalistic paradigm by continuously changing what counts as Indigenous sovereignty. The recent DAPL pipeline ruling, as well as the termination of other extractivist projects, may set legal precedents that can help Indigenous Peoples justly honor their right to manage their ancestral lands.

In challenging the judicial rulings, Energy Transfer Partners, a company plagued by over 300 pipeline spills since 2012, demonstrates the limitations of domestic laws to protect sacred Indigenous lands. Ultimately, laws cannot “define sacredness or confine the idea to specific dots on a map.” Instead, efforts should be “made to amend existing laws governing the protection of sacred and cultural places to encompass an Indigenous definition of sacredness,” stated Victoria Tauli-Corpuz, former UN Special Rapporteur on the Rights of Indigenous Peoples, after visiting DAPL in 2017.

Despite the potential progress offered by DAPL, current legal-based frameworks—as they stand—will not upend the current paternalistic relationship the U.S. government holds with Native American nations. Modern legal frameworks hold a colonial legacy that has disposed, relocated, and disenfranchised Indigenous Peoples time and time again. To overcome this limitation, a post-legal imaginary is necessary for meaningful and sustained change. One clear solution offered by Native Americans and First Nations is to give the land back. The Land Back movement is complex, but in essence, “Land Back is about Indigenous peoples confronting colonialism at the root. It’s about fighting for the right to our relationship with the earth. It’s about coming back to ourselves, as sovereign Indigenous Nations,” stated Ronald Gamblin, a 4Rs Youth Movement leader.

Ultimately, new beginnings towards Indigenous sovereignty are possible. In light of the looming shutdown of DAPL, other major planned pipeline projects have been cancelled or delayed. The changes do not end there: the Supreme Court recently recognized half of Oklahoma as sovereign tribal land and the infamous Washington NFL team is finally changing their racist name and logo. Paradoxically, the team’s logo will remain inside the National Museum of the American Indian in Washington until 2027.

Indigenous People deserve more than the ever-changing judicial rulings—largely determined by settlers on Indigenous lands—that dictate their lives. So long as land grabbing and a disrespect of sacred sites on Mother Earth exist, the fight for Indigenous sovereignty continues. In all we do, Cultural Survival will continue to defend and prioritize Indigenous Peoples’ sovereignties.