In Celebration of the Retirement of Racist Washington Football Mascot 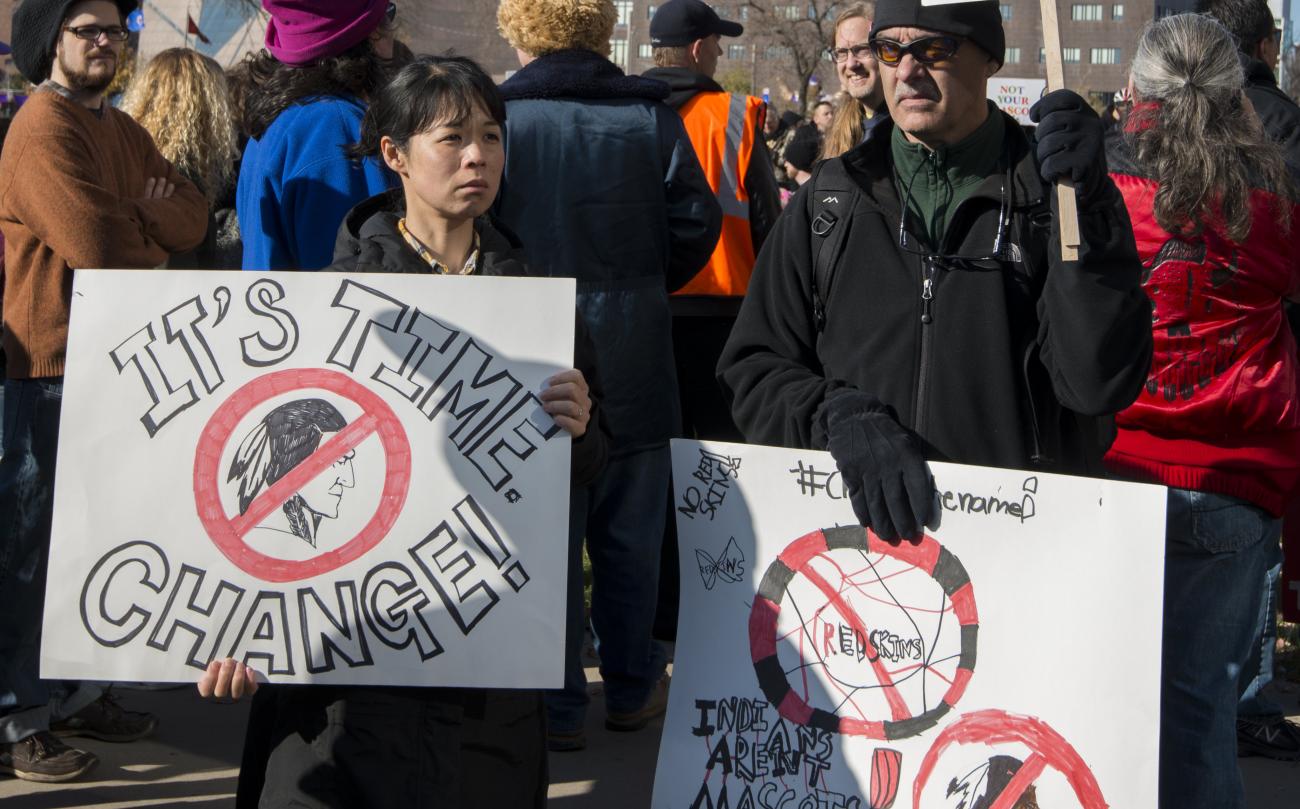 Cultural Survival joins Indian Country in celebrating the long-overdue retirement of the racist team name and mascot as the Washington football team’s identity and branding. We are encouraged by progress being made on the national front and hope that other national sports teams such as the Atlanta Braves, Kansas City Chiefs, and Cleveland Indians take immediate steps in the same direction.

On July 13, 2020, the Washington NFL team announced its plan to conduct a “thorough review” of the team’s name and mascot after decades of activism for change. The development came after recent pressures from Indigenous activists and a push from companies -- including Nike, Fedex, and Amazon -- that pulled the team’s merchandise from their stores.

“This moment has been 87 years in the making, and we have reached this moment thanks to decades of tireless efforts by Tribal leaders, advocates, citizens, and partners to educate America about the origins and meaning of the R-word,” said The National Congress of American Indians President, Fawn Sharp. “NCAI looks forward to immediately commencing discussions with the league and team about how they will change the team’s name and mascot, and a prompt timetable for doing so. Indian Country deserves nothing less. The time to change is now.”

NCAI has been one of the organizations leading Indian Country’s movement to eradicate offensive Native “themed” mascots from sports and popular culture for more than 50 years. In recent weeks, First Peoples Worldwide and IllumiNative worked with a coalition of over 1500 investors and Indigenous organizations to send a message to the NFL about the need to change the Washington NFL team name as well as a letter to NFL Commissioner Roger Goodell. Carla Fredericks (Mandan, Hidatsa, and Arikara Nations), director of First Peoples Worldwide and board member at Cultural Survival, is one of the key people who have organized a campaign to change the name and is calling for further action beyond the name change. She argues that the team must address the mascot, logo, inappropriate fan behavior, and consult Native leadership moving forward. The team name is ultimately the first, not the last, step.

Amanda Blackhorse (Diné), a social worker, Indigenous identity advocate, and lead plaintiff in the Blackhorse v. Pro Football Inc. case agrees. “In order for the Washington team to truly stand for racial equality, a 100% rebrand of the Washington franchise with NO Native themes/imagery/names is required,” Blackhorse remarked in her official statement. While she acknowledges the victory in the long ongoing fight against racist branding, Blackhorse asks that people celebrate without idolizing the companies and actors that have continually made the progress difficult. “To be clear, I'm not thanking Dan Snyder for today's move nor will I thank FedEx or other folks complicit in racism toward Indigenous people for so long. The wounds are still deep and fresh. The Washington team’s statement was the most insincere statement ever and it’s clear they've not learned anything about racism and their part in all of it. Still we are not mentioned in the statement, still we are ignored and pushed aside. To think they've had a change of heart is believing in them too much. I don't want an apology, I want action.”

Racist depictions of Native Americans have existed as long as settlers have been in North America, but the modern movement to tear down these images began gaining traction in 1962 when Suzan Shown Harjo (Cheyenne and Hodulgee Muscogee), along with other Indigenous leaders, brought light to the issue of mascots in a series of legal battles. As a policy advocate, writer, and curator, Harjo has seen the issue develop over many years. “This day of the retirement of the R*dsk*ns slur and stereotypical logo belongs to all those Native families... who bore the brunt of and carry the scars from the epithets, beatings, death threats and other emotional and physical brutalities resulting from all the “Native” sports names and images that cause harm and injury to actual Native Peoples (both persons and nations),” she states. “It does not belong to a change of heart by the team or to those who are bandwagoning and in line to cash in on our hard-fought and hard-won success.”

To date, Harjo and other no-mascot advocates have eliminated over 2,000 racist school mascots, one pro baseball symbol, and now the mascot of the Washington football team. Harjo affirms that there are many more to go, including 900 or so more obscenities in the names, symbols, and overall branding in notable groups in the United States. But with this current momentum, it has become more possible than ever before to address entrenched racism. Many Native activists involved in this work have cited and thanked the Black Lives Matter movement as the catalyst for the flurry of changes we are seeing now.  “The #BLM movement was the catalyst this year, Black leadership declaring “enough!” with institutional racism and violence,” shared professional athlete Temryss Lane (Golden Eagle Clan,  Lummi Nation).

Cultural Survival’s Executive Director Galina Angarova (Buryat), stated “Cultural Survival has supported the elimination of racists mascots for many years nationally and locally. In Massachusetts, where Cultural Survival is headquartered, there are still close to 40 schools which use imagery and names that depict Native Americans. We have been supporting Bills S.247/H.443 and S.1877/H.2776 at the Massachusetts legislature to remove racist imagery from state symbols and schools respectively. The time is now to remove all racist mascots and imagery and work with Native Peoples to honor them in culturally appropriate ways.”

Take action  to ban the use of Native mascots in high schools across the Commonwealth of Massachusetts:  http://maindigenousagenda.org/amend-the-mascots-bill/