A Cry for Electoral Reform in Nicaragua 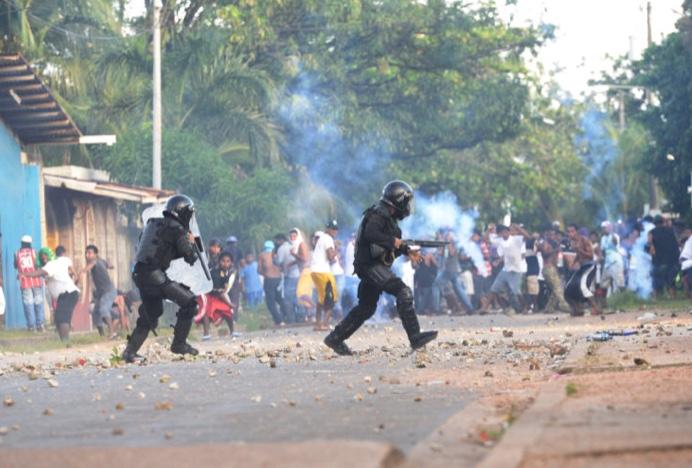 Indigenous Miskitu leader Brooklyn Rivera seeks to change electoral processes in Nicaragua’s North and South Caribbean Coast Autonomous Regions (the RACCN and RACCS). Rivera is submitting recommendations to the Organization of American States (OAS), as part of a follow-up report on Nicaragua’s recent municipal elections that occurred on November 5, 2017. On this day, the Sandinista National Liberation Front (FSLN) state party won control of 75 percent of the municipalities in the RACCN and RACCS and symbolically conquered the Indigenous and Afro-descendant peoples by the ballot.

Rivera now calls for the autonomous regions to inaugurate elections by customary law, known as ‘usos y costumbres’ in greater Latin America and ‘ley consuetudinario’ in Nicaragua.  Elections by customary law would prevent interference by national political parties (controlled from Managua) in the autonomous regions’ elections. Rivera believes he has the law on his side. He cites the 1987 Autonomy Law (Nicaraguan law 28), granting political autonomy to the Nicaraguan Caribbean coast; and the 2005 international case of YATAMA v. Nicaragua in the Inter-American Court of Human Rights, which approves the election of officials through traditional Indigenous practices. The question remains why the Nicaraguan state would sign onto the Courts’ non-binding ruling. The FSLN currently has all the power and nothing to gain by implementing this international decree.

Recent Elections in the Autonomous Regions

Brooklyn Rivera is widely accredited with the 1987 founding and long-term directorship of Yapti Tasba Masraka Nanih Aslatakanka/Children of the Mother Earth (Yatama), a civic organization that became an ersatz political party in 1990. The majority of Yatama’s supporters identify as Miskitu, but Indigenous Mayangna, Ulwa and Rama; Afro-Indigenous Garifuna; Afro-descendant Kriuls; and native mestizos also are supporters. Yatama has remained the only grassroots Indigenous and Afro-descendant organization/political party in the Nicaraguan autonomous regions.

Yatama made an alliance with Ortega’s FSLN party in 2006, but broke the alliance in 2014. Yatama then converted into an independent, regional political party. Since breaking the alliance, Yatama has accused the FSLN and the President Ortega-controlled Supreme Electoral Council (CSE) of electoral fraud in the last three elections in the autonomous regions--the 2014 regional, the 2016 general, and the 2017 municipal elections.

Unfortunate acts of violence followed each election in Bilwi, (pop. 50,000) the capital of the RACCN. Both sides repeatedly blamed each other. Yatama indicted the central government for suppressing their ‘peaceful’ protests—calling out the FSLN state-controlled police, riot police from Managua, and Sandinista youth gangs. The state justified their clap-down on Yatama protestors to protect Nicaraguan citizens, namely Bilwi residents.

Yatama does have a reputation for fierceness. Many of its sympathizers are former US-backed Contras and trained fighters, who fought against the Sandinistas in the Nicaraguan revolution from 1979-1990. Yatama protests resurrect panic in Bilwi residents, who suffer from a collective PTSD from the war-torn years of the 1980s. Bilwi families fear for their lives, homes, and businesses that are threatened and looted during post-election protests. Non-political neighborhood gangs also join in street protests and are responsible for some of the brutality and looting. Bilwi residents do not care who is to blame—they simply want peace and progress.

The interviewer asked Rivera why Yatama does not peacefully bang caserolas (cooking pans) or sing protest songs when taking to the streets to protest election results, like the opposition party La Alianza is currently doing in Honduras, amidst the contested presidential election. Rivera, who fluently speaks Miskitu, Spanish and English, responded, “Banging pots and singing songs is difficult when being fired upon. Yatama political prisoners are still being held in Bilwi and other Caribbean coastal jails.” Rivera continued, “Bilwi remains militarized after the 2017 municipal elections, for fear that the majority--Yatama supporters–will act out in retribution for the Sandinista’s stealing of the elections.” In this way, Bilwi residents become emotional hostages following each purportedly stolen election.

Yatama and the Failed Autonomy Project

Rivera has decided to re-register Yatama as a purely civic organization, thus returning Yatama to its 1987 roots. This change has transpired since the recent municipal elections, when the Sandinistas all but disappeared Yatama from the Nicaraguan political map; the FSLN gained control of Yatama’s last strong-holds--the municipal centers of Bilwi, Waspam, and Awaltara. Local costeño scholars and intellectuals concur that the fatal flaw of the envisioned autonomy project, was that it provided for the region’s continued involvement with national political parties. This created the possibility of a de facto loss of autonomy by the vote, which now has come to pass.

Armed mestizo colonists from the Pacific and interior of the country, who definitively vote FSLN, are invading Indigenous and Afro-descendant territories. The increasing internal colonization of the region since 2008, combined with the alleged FSLN electoral fraud since 2014, paves the way for Sandinista state control of the autonomous regions. Sandinista control of the RACCN and RACCS threatens the autonomy process and calls into question the ability of the Indigenous and Afro-descendant people to maintain control their human and Indigenous rights; and their valuable rainforest resources. The larger, bi-national (Honduras and Nicaragua) homeland known as Muskitia, the largest rainforest in the Americas north of the Amazon, remains a region targeted for economic exploitation by the kleptocratic Nicaraguan nation-state.

A Statement by Brooklyn Rivera:

“There is no use for Yatama to enter elections, as free and fair elections do not exist in Nicaragua. The FSLN has stolen positions from Yatama in the last three elections and now have left us with nothing, even though we have the majority of the people’s support. We call for the implementation of “usos y costumbres.” We [Yatama] previously won the international court claim in 2005, based on the right to elect officials by traditional practices. For regional and municipal elections, we no longer want to be tied to national political parties or to have votes counted by the CSE. We do not trust the CSE. We demand that autonomous Indigenous and Afro-descendant votes should be counted by measuring a line of supporters for candidates in each community or barrio (neighborhood) by voting precinct.

This style of election should have no political party associations or campaigning. Campaigning is not an Indigenous tradition. The only electoral position tied to the nation-state will be those elected during the general elections, where National Assemblyman are elected, because the CSE demands control of this voter count.”

Since 2007, President Daniel Ortega, has expanded Sandinista (FSLN) control to all branches of the government, including the Supreme Electoral Council (CSE) and the military and police. After winning 135 of 153 mayoral posts in the recent elections, the Sandinistas stand accused by human rights organizations and opposition parties of massive voter abstention and electoral fraud via voter suppression and voter manipulation, known as “Ratón Loco.” Although the OAS publicly supports the results of municipal elections, the enduring OAS agenda aims for electoral reform in Nicaragua to ensure more transparent and democratic processes.

The Nicaraguan Sandinista state government increasingly resembles dictatorships in Cuba, Venezuela, and Bolivia. The authoritarian states of China and Russia also have become major investors in Nicaragua’s infrastructure and military. Concurrently, the US government and international agencies express concern over increasing human rights violations in Nicaragua and the lack of transparency in the country’s democratic processes.

The US Congress in an unanimous vote, has passed The Nica Act, (the Nicaraguan Investment Conditionality Act) which proposes to suspend bi-national aid to Nicaragua. The Nica Act is now moving toward the Senate. In January 2018, a US Miskitu association plans to meet with the congressional representatives who spearhead the Nica Act, to further denounce the Sandinista government for electoral fraud and human rights abuses against the Indigenous and Afro-descendant people on the Nicaraguan Caribbean coast. Can the voice of Miskitu people make a difference in international politics or the OAS’s attempt at electoral reform in Nicaragua? Will the voice of Indigenous Miskitu leader Brooklyn Rivera be heard?