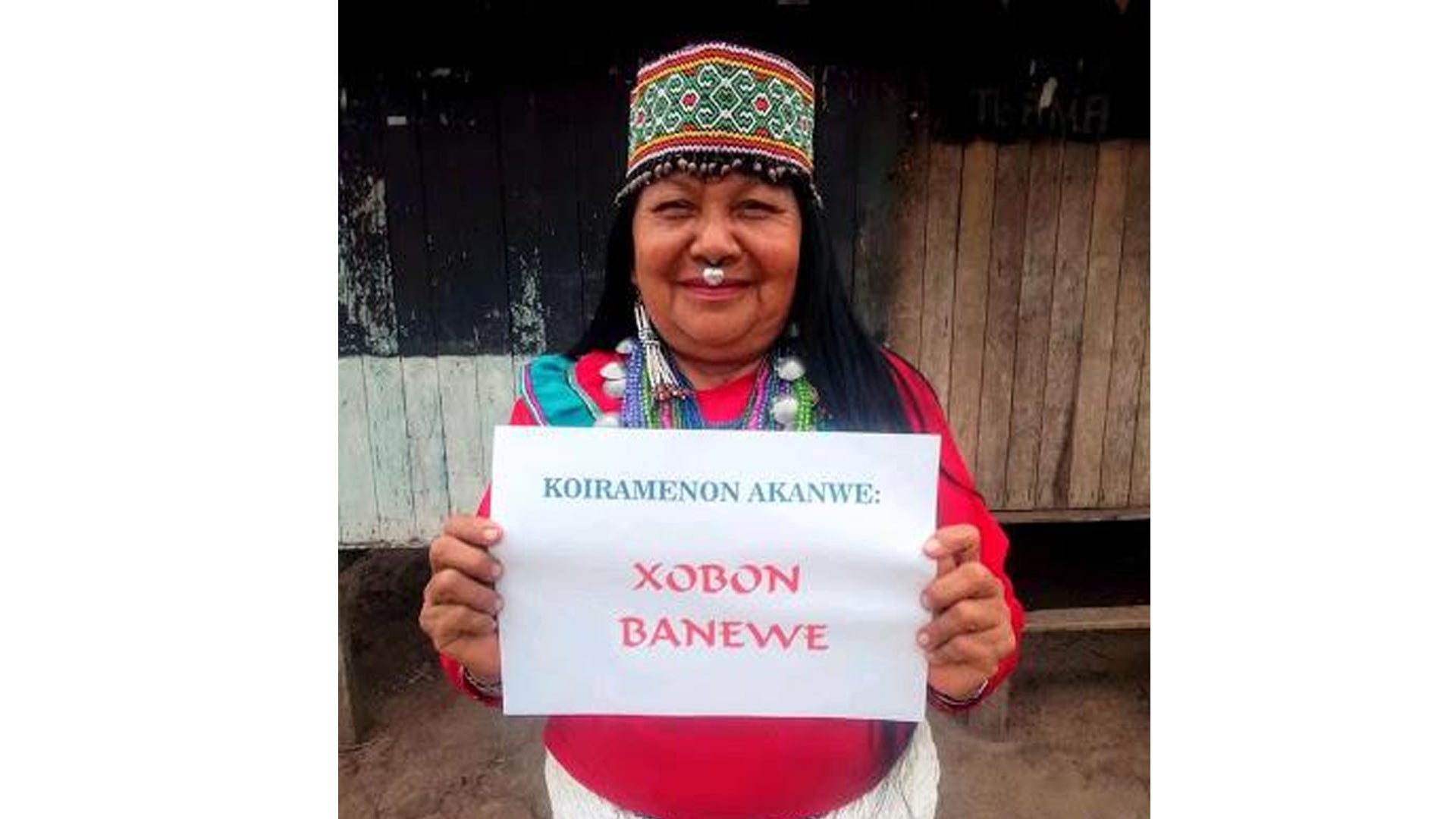 Photo: Celia Panduro (Shipibo) of Masisea, Pucallpa, Peru, holds a sign that says "Stay at home" in her native language. Photo by Cecilio Soria, social communicator with the Shipibo Konibo Xetebo Indigenous governance council, whose radio station was supported by a grant from Cultural Survival in 2018.

Although many have argued that “coronavirus doesn’t discriminate,” as a human rights organization, we know that societies do. While the whole world is dealing with the COVID-19 pandemic, Indigenous communities are especially at risk due to the inequalities they experience in the home countries. There are over 476 million Indigenous people living in 90 countries and account for 6.2 percent of the global population. However, Indigenous Peoples are nearly three times as likely to be living in extreme poverty and are more likely to suffer negative outcomes from infectious diseases. Many Indigenous communities are already impacted by malnutrition, pre-existing conditions, and lack access to quality healthcare.

In a recent statement, UN Permanent Forum on Indigenous Issues Chairperson Anne Nuorgam (Sami) urged States to “take immediate steps to ensure that Indigenous Peoples are informed, protected and prioritized during the COVID-19 global health pandemic. In this respect, information in Indigenous languages is important to ensure it is accessible and followed. Of special concern are the vulnerable chronically ill, those in medical fragility, as well as the Indigenous elders. The Indigenous elders are a priority for our communities as our keepers of history and traditions and cultures. We also ask Member States to ensure that Indigenous peoples in voluntary isolation and initial contact exercise their right to self-determination and their decision to be isolated be respected.”

Several of Cultural Survival's grant partners in Indigenous communities have informed us of the unique situations on the ground in their communities, how they are coping, and what is needed:

Obstacles to Accessing to Food and Water

In many Indigenous communities, the price of basic items like corn, beans, and seeds have surged. As corn is the major staple of the diet particularly in Mexico, Guatemala, and El Salvador, this is already a threat to food security for many communities. Increased scarcity and higher cost of seeds for planting is also a threat. As the rainy season (planting time) begins in Central America, if people cannot  access seeds, it will affect incomes and food security for many and will lead to deeper repercussions down the line. There is an immediate need for provision of grains, corn, beans, rice, and nonperishables.

Food insecurity exacerbates existing inequalities and is particularly grave for families who already lack access to well-paying jobs or workable land. Those who rely on work to bring home food are now unable to purchase food to feed their families. Almost all of the Indigenous communities we spoke to expressed this concern. There is a need for food banks, delivery of basic food and water supplies for those who cannot afford it now that they have no work. When choosing between self-isolating and starvation, or continued work and access to food, it is obvious that communities must choose to continue working. “The need to pay for basic food and services for their families motivate people in communities to break the quarantine since they do not have a stable salary, and need to go out and sell their products," shared our partner in Guatemala.

Several communities in Mexico are returning to work the land themselves and there is a need expressed for support and education on food sovereignty and agricultural production.  However, in other areas, government lockdowns are preventing even rural farmers from attending to their fields. Guatemala is criminalizing being outside the home after 4pm and domestic travel. India has used extreme force in implementing lock downs. In Nepal, our partners reported, “Due to lock down even the people of villages and rural areas are not going to the field at this peak time of the harvesting due to the strong lock down.”

Access to clean, drinkable, and running water is also a major challenge.  Many Indigenous communities, including in the US, still lack access to running water. In Central America, climate change has brought an extreme drought going into its sixth year.  What running water exists is increasingly contaminated and unsafe for human, animal consumption and often even unsafe for washing. In Guatemala, 90 percent of rural communities do not have regular access to  clean water. This is the case for Maya Mam communities in rural areas like San Idelfonso Ixtahuacán, as well as in urban areas, like the crowded, informal neighborhoods in cities like Guatemala City where Indigenous families have migrated after being pushed out of their home communities due to development projects, forest destruction, land-grabbing, and poverty.

Governments have exacerbated these problems by making ill-informed policies that do not coincide with global or even national patterns, and are not differentiated to reflect the needs and realities of communities. A bill in Guatemala to suspend monthly bills for electricity and water was shot down in congress. Indigenous communities lack confidence that the government will make good on the few promises they made to provide these basic provisions. International cooperation and support is extremely important for the survival of people.  There is a special need to support initiatives managed by Indigenous governments, communities, organizations, women, youth and volunteers.

Indigenous communities already lack access to medical supplies and healthcare. Even the most basic supplies were already scarce in many Indigenous community health clinics, and now rural clinics are completely unprepared to deal with a crisis, both in terms of preventative measures, diagnosis, and treatment. With the closure of public transportation in several countries, communities expressed a need for emergency cash on hand to pay for private transportation to hospitals located in capital cities in the event of more critical cases of COVID. “The Indigenous Peoples of the region have always suffered from multiple obstacles in matters of health, which today means that the pandemic places them in a state of greater vulnerability by not having the basic supplies to even attend to prevention and diagnosis,” stated one partner in Guatemala.

Communities have warned the general population to avoid visiting rural communities, in order to prevent the spread of the virus from reaching them. However, we also hear that many Indigenous people living in cities are choosing to return to their communities to ride out the quarantine, possibly bringing infections with them.

Existing competing threats to Indigenous communities' survival threatens their ability to address the COVID-19 crisis with the seriousness it deserves.  As one community put it, “There are no nearby hospitals and the doctors do not treat us with dignity. [We are dealing with] other viruses such as the forced eviction, disappearances, and femicide. It is important not to panic. We have had very difficult times before. We cannot isolate ourselves, because we have to go out to work to prepare the land for planting corn. We have to be aware of any violation of our human rights, we must keep our eyes wide open and not be afraid to report,” stated another partner in Guatemala.

We have received reports of communities who are forced to continue patrolling their forests for illegal logging, to protect borders from entry, and some have had to choose between maintaining a blockade on roads leading to mining construction sites or staying at home to prevent transmission of the virus. In Colombia, Indigenous leaders have been shot and killed with impunity while self-isolating inside their homes. The ongoing operation of mining, land-grabbing, logging, and pipelines, forces Indigenous communities to continue defending their lands.

In the United States, the federal government has taken the opportunity of crisis to revoke a local Mashpee Wampanoag Tribe’s right to their land. Removal from their land is an existential threat to their culture and community but more immediately, threatens the Tribe’s response to the crisis by forcing them to channel resources into responding to this crisis rather than providing essential prevention services, and only increases local panic.

Information for Indigenous Peoples in their own languages is highly lacking. Rural Indigenous communities often cannot access the internet or may lack fluency in mainstream languages and are not receiving reliable information from health experts. Additionally, some governments are not releasing accurate data on the real number of cases and a lack of independent media obfuscates the intensity of the crisis. This factor, combined with low levels of formal education in rural or impoverished communities, means misinformation is spreading rapidly.   Lack of information and misinformation has also led to the disbelief about the pandemic and thus can contribute to a higher exposure of Indigenous communities to the virus.

There is a major need expressed by Indigenous communities for reliable, regular communication in Indigenous languages, via community radio. A representative of the Tharu people in Nepal shared the following: ”Radio stations are not working full time. There is a lack of communication between government and people. More information about every activity by the government is needed. There is still a lack of knowledge of COVID-19 among people and people are afraid. Awareness is needed. There is superstition circulating and people are doing superstitious activities. The information regarding every service is needed and news updates needed. Tharu communities have their own system of communication and leading our village so the government should incorporate those systems in their response.”

A community in Oaxaca, Mexico, who has a strong community radio program supported by Cultural Survival, shared, “As a reaction of COVID-19 people are returning to work on their fields to produce their own food to provide them security of what they are eating. Radio programs are helping to reduce panic. We are broadcasting programs about our cultural knowledge. Agriculture knowledge will help us get through this crisis. Food is the first necessity needed to be healthy and strong, and to cure us from diseases. Spirituality is also an essential way to deal with what the world is facing right now.”

Meanwhile, in Veracruz, Mexico, in an area where no local radio stations exist, our partner expressed the following:  “We are a region with insufficient information compared to the national level. This makes it difficult to be aware of the new provisions established by local, state, and federal institutions to attend to the health emergency. Due to previous experiences, people tend to be carried away by information that is false. Similarly, authorities often make decisions based on misinformation, panic, or despair.”

Another grant partner in South Africa, the Khoekhoe people, shared that they are being linguistically and financially excluded by their government response: “We find our community mostly unable to cope with the anxiety and stress associated with the prospect of becoming infected. We also remember that in 1713 hundreds of thousands of our First Nation Khoekhoe people perished from smallpox. We are not being acknowledged by our government, our history of trauma is not recognized. No resources or support is provided by our government during this time of extreme distress.”

The case of Guayaquil, Ecuador is another example of intensified impact when governments are not preparing the population with accurate information in a timely manner.

Indigenous Peoples have solutions and need to be active participants in actions being taken by governments. “Their good practices of traditional healing and knowledge, such as sealing off communities to prevent the spread of diseases and of voluntary isolation, are being followed throughout the world today,” stated Nuorgam in her statement. As an international community, we need to ensure Indigenous rights are respected and adequate resources are allocated to Indigenous communities.

To help our COVID-19 prevention and and relief efforts,