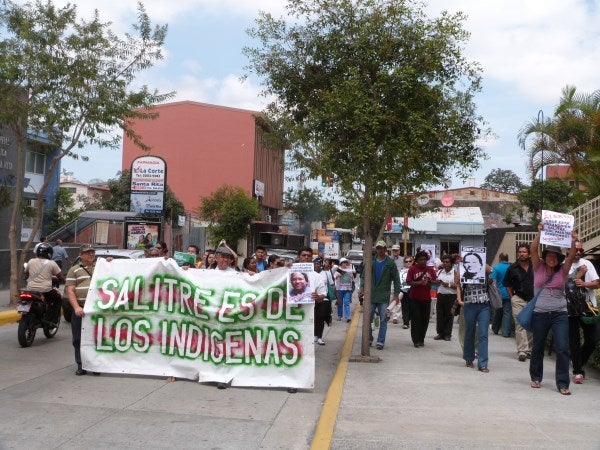 On the evening of March 18, 2019, Indigenous leader Sergio Rojas Ortiz was assassinated in his residence in Salitre de Buenos Aires, part of the Puntarenas province, after being shot multiple times.

Rojas was a member of the Uniwak clan, part of the Bribri community, one of the eight Indigenous Peoples that are recognized in Costa Rica. He was one of the most important and well-known Indigenous leaders in the region, and was a member of the National Front of Indigenous Peoples (Frente Nacional de Pueblos Indígenas - FRENAPI), the Council for the Defenders of Mother Earth (Autoridades Propias Defensoras de la Madre Tierra), and the Association for the Development of the Salitre People (Asociación para el Desarrollo del Pueblo de Salitre).

Authorities have not yet established the causes for or mastermind behind the homicide, but the crime is deeply concerning given that it occurred only hours after Rojas Ortiz, along with two neighbors, went to the state prosecutor to report a series of threats that members of the Salitre community had been receiving with regard to a land dispute concerning Indigenous territories.

Three United Nations’ experts, including Michel Forst (Special Rapporteur on the situation of human rights defenders) Victoria Tauli-Corpuz (Special Rapporteur on the rights of Indigenous Peoples) and Agnes Callamard (Special Rapporteur on extrajudicial, summary or arbitrary executions), issued a joint statement with  the following message to the Costa Rican government: “We demand that the Costa Rican authorities thoroughly investigate the situation in order to identify those who are responsible for this vile crime and ensure that they face legal consequences... The Costa Rican authorities must immediately provide culturally appropriate protection to members of indigenous peoples who are at risk simply for defending their rights.”

Reacting to the murder, Costa Rican president Carlos Alvarado Quesada condemned the crime, labelling it  “A tragic day for the Bribri People, for all our indigenous communities, and for all of Costa Rica.”  Costa Rica has formed a special investigative unit in order to uncover the details of the crime and identify those who are responsible. But the homicide has rightly exposed some of the state’s negligence toward implementing Indigenous rights. Before the tragedy, the Inter-American Commision for Human Rights (IACHR), in accordance with 2015 Resolution #6, had granted the Teribe and Bribri peoples of Salitre “precautionary measures,” which oblige the Costa Rican government to protect the safety of these at risk communities, including Sergio Rojas.  The resolution established: “It is necessary that the police are present in the Salitre Indigenous Territory, and that they set up control points and increase patrolling of the area until the Costa Rican government can legally regain control of these indigenous lands.” Yet since that was granted,  the IACHR has received many complaints from members of the Salitre community, arguing that the Costa Rican state has failed to implement the precautionary measures according to protocols established in consultation with the Bribri and Teribe communities.  Dualok Rojas Ortiz, the victim’s brother, claims that Sergio had not had protection for over a year and a half, and in fact had chosen to live apart from his family due to threats and concerns for their safety.

The murder of an Indigenous leader is a tragedy of major proportions; it is a terrible setback in Indigenous Peoples’ struggle to maintain their autonomy and human rights, and as Sergio Rojas was shot at close range in the safety of his home and in the middle of the night; the conditions of his death has raised feelings of anxiety, vulnerability, and uncertainty among Indigenous communities. But the murder also stands to deter other human rights and environmental defenders from taking a stand to protect their rights and their lands as had been the life’s work of Sergio Rojas.

At the root of the conflict that Sergio Rojas dedicated his life to is the failure of the Costa Rican state to legislate in favor of Indigenous autonomy over their lands.  Following Rojas’ murder, the IACHR shared the following in a press release: “The IACHR stresses the territory’s importance for the physical and cultural survival of indigenous peoples...States’ failure to identify and effectively demarcate indigenous land can create an atmosphere of permanent uncertainty, which affects the group’s social harmony.”

Meanwhile, a Protocol was established in 2017 between Indigenous communities and government institutions of Costa Rica to implement demarcation and recuperation of Indigenous territories. The protocols also laid out step by step details on the implementation of security measures that were needed to provide effective and culturally appropriate protection for the targeted Indigenous communities as ordered by the Inter-American Commission on Human rights in 2015.  Sergio Rojas himself lead the negotiations and signed the Protocol on behalf of the community of Salitre. Yet in the past four years, community organizations report this Protocol was all but ignored by Costa Rican government officials. This lack of implementation of this agreed upon Protocol for conflict mediation and safety measures is precisely what allowed for the conditions that lead to the death of Sergio Rojas.

Just months before Sergio Rojas’ death, in a report to the UN’s Universal Periodic Review of Costa Rica in October 2018, Cultural Survival had warned  “Colonization of Indigenous territories by non-indigenous individuals is a troublesome phenomenon that has not yet been solved in Costa Rica. Such colonization efforts are even more concerning when they involve the use of violence. This violence is especially concerning in the context of the Costa Rican government, which fails to provide clear judicial, political, or administrative processes for evicting non-indigenous people from these colonized Indigenous territories.” Read Cultural Survivals report on Indigenous rights violations in Costa Rica, submitted to the 3rd cycle of the Universal Periodic Review.

In the wake of Sergio Rojas’ death, Cultural Survival stands in solidarity with the Indigenous communities of Costa Rica in their efforts seeking autonomy over their territories. We joins their call to implement safety measures and land demarcation in accordance with the 2017 Protocol signed by Indigenous communities and the government, and call on Costa Rica to fully investigate the murder of Sergio Rojas and hold to account those responsible.