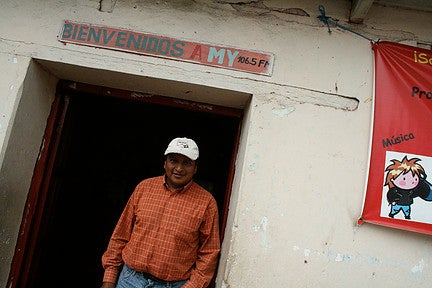 Felix Cabrera founded Radio Mujb'ab'l yol in his home town of Concepción Chiquirichapa, Quetzaltenango, in early 2000.  During the armed conflict in Guatemala, Felix had fought alongside many other rural Indigenous farmers for agrarian reform. When the Peace Accords were signed in 1996, Felix put down his arms and took up a microphone.

Since its beginning, Radio Mujb’ab’l yol  has played an important role in the community. The radio coordinates with local organizations, including, for example, Health Unlimited, which partnered with the station to broadcast information on sexual and reproductive health. Last month, volunteers traveled to a nearby town of San Juan Ostancalco to report on a community consultation on mining. In addition to broadcasting local information, volunteers use the Internet to find national and international news programming, which they share on the radio by translating it into their local Mayan language of Mam.