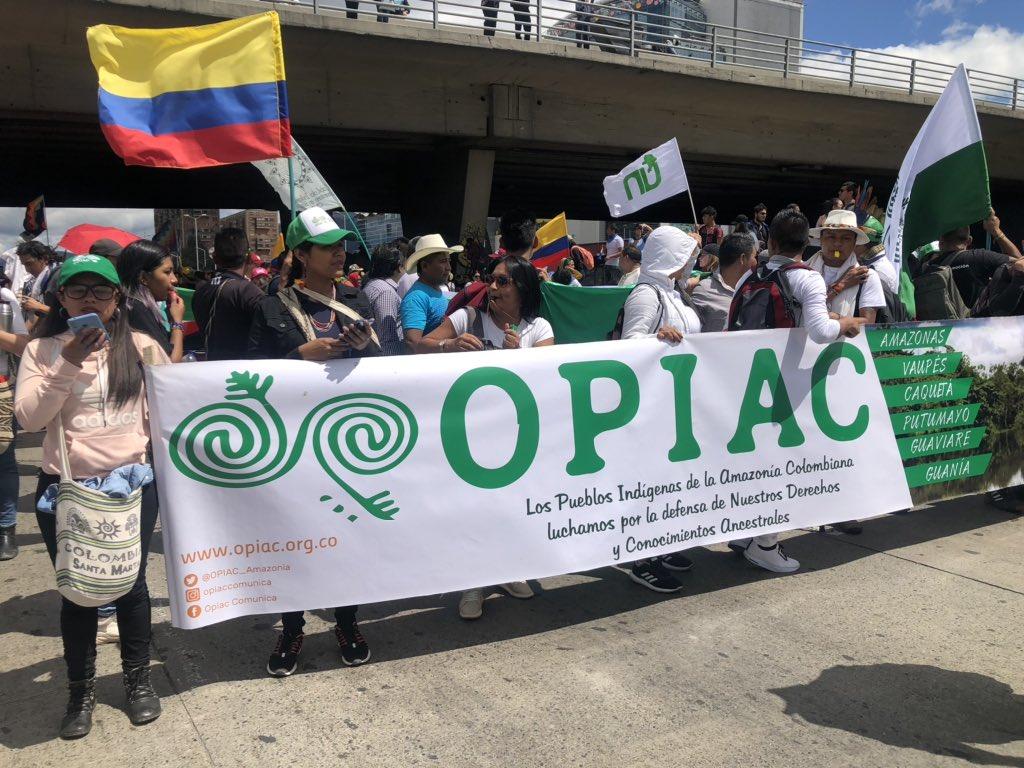 Beginning on November 21, 2019, at least 250,000 Colombians have flooded the streets in three separate general strikes, sparked by rumors of cuts to minimum wage for young people. Since then, the strikes have ballooned to decry a wide range of issues including  corruption in the public university system, a lack of government action to stop the wave of violence against Indigenous human rights and environmental defenders, of which more than 100 have been killed since Duque took office, and President Duque’s failure to effectively implement the 2016 Peace Deal. Five have been killed as a result of police violence against protestors. Duque has conceded to hold a “national dialogue,” but protestors who have met with him are unsatisfied. Sixty-six Indigenous Nations participating in the strike have issued a joint statement outlining their demands. They denounced, “Despite the enormous value of the Amazon biome both nationally and internationally, the risks we take to preserve our environment and our culture are very high.” They named increase in deforestation, land grabbing, extractive industries such as mineral mines, oil drilling, and logging, agroindustry, the cultivation of illicit drugs, the new colonization of their territory, and violence against Indigenous leaders as reasons drawing them to protests, noting that all of these issues were “suddenly exacerbated” as a result of President Ivan Duque’s presidency.

On November 14, 2019, Cultural Survival, Semilla Warunkwa (Fundación Semilla Warunkwa - FUSEWA) and Consejo Regional Indigena del Tolima submitted a report on Indigenous rights violations in Colombia as part of the United Nation’s 100th Session of the Committee on the Elimination of Racial Discrimination (CERD). The Committee monitors the implementation of the Convention on the Elimination of All Forms of Racial Discrimination by member States.

The report submitted by Cultural Survival, Semilla Warunkwa and Consejo Regional Indigena del Tolima will assist the CERD in reviewing Colombia’s human rights obligations. Columbia is home to over 100 distinct Indigenous Peoples, with over a third being at risk. Although the Colombian Constitution of 1991 outlines more rights and protections to Indigenous Peoples than any other in Latin America, Indigenous Peoples and their ownership over land in Colombia have become increasingly under threat due to assassinations, recruitment of child soldiers, and extractive-industry related conflicts. These threats to Indigenous rights and existence in Colombia have only been exacerbated by the decades long civil war that took place between the armed rebel group FARC and the Colombian military and now, by the leadership of President Duque, which began in August 2018.

Despite Peace Accords being signed in 2016, recently there has been a massive wave of systematic violence against Indigenous Peoples in Colombia, particularly against the Nasa Peoples in Cauca, with the Regional Indigenous Council of Cauca labelling this a genocide. One figure reports that more than 121 Indigenous peoples have been murdered since August, 2018—when President Duque took office, and over 777 social leaders have been murdered since September 1, 2016. In November 2019, 17 Indigenous members were killed in Cauca in a single week. The report highlights that this violence is systemic and actively ignored by the Colombian government. When this violence is brought to the attention of government officials, “the violence does not stop,” CRIC was quoted. “On the contrary, it continues to rise.”

The review of Colombia in the 100th session of the Committee took place Nov 27 and 28 in Geneva, Switzerland. Later,  Colombia will receive Concluding Observations from the CERD outlining recommendations to be implemented before the next review. Cultural Survival has included recommendations in its report addressing the current state of Indigenous human rights in Colombia:

1. Promptly investigate and bring to justice those responsible for the murders of Indigenous traditional leaders and Indigenous guards.

2. In consultation with Indigenous leaders and upon their request, provide immediate security for those facing threats of violence.

3. In consultation with Indigenous leaders, create a process to incorporate Indigenous authorities in post-conflict implementation bodies.

4. Facilitate an in-depth investigation into systemic violence by the UN Human Rights Commission and the OAS Mission to Support the Peace Process in Colombia.

5. Invite and facilitate an official mission an analysis by Victoria Tauli-Corpuz - Special Rapporteur on the rights of Indigenous Peoples / Office of the High Commissioner for Human Rights on national Indigenous territories.

6. Denounce systemic violence against Indigenous People and reaffirm the right of Indigenous Nations to safety and security in their territories.

7. Respect the self-determination of Indigenous Peoples and the authority of the Indigenous Guard to defend Indigenous territory as part of their territorial autonomy.

8. Implement the Ethnic Chapter of the Peace Accords

10. A comprehensive legal and policy reform programme should be undertaken to advance implementation of Colombia’s commitments under UNDRIP and ILO Convention 169, including immediate adoption of a national action plan drafted for implementation of the Convention.

11. Halt the expansion of extractivism in all its forms (oil, mining, fracking and industrial monocultures) in national territory until true free, prior, informed consent of Indigenous Peoples is achieved.

12. Fulfill state obligations in consultation, coordination and permanent dialogue with Indigenous authorities. This must be carried out under the framework of the Peace agreements, with specific actions and a committed and clear strategy for implementation.