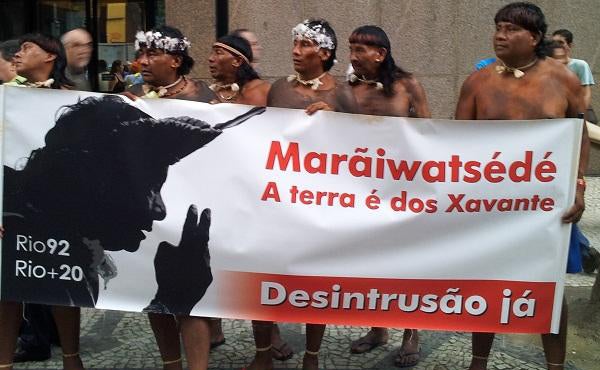 In a genocidal move that exposes an entire A’uwẽ-Xavante community to COVID-19, Brazilian health officials returned a COVID-19-infected man to the village of Marawãitsédé where health and sanitation are highly precarious. The decision to return this man to Marawãitsédé, which has a population of 60 (approximately 900 in the reserve) and where A’uwẽ-Xavante suffer malnutrition and extremely high rates of diabetes, violates WHO guidelines and recommendations for the treatment of confirmed COVID-19 cases: Track, Test, and Treat, where treatment includes isolation to protect co-residents and communities. It also violates the National Indian Health Service policy to make sure that domestic environments are adequate to ensure the isolation of confirmed COVID-19 cases.  In fact, Indian Health Service’s special COVID-19 guidelines are misleading, vague and inadequate for the current situation. Its standard COVID-19 protocol --- “Test and Return Home for domestic isolation” -- is irresponsible and completely out of step with Indigenous realities where isolation is impossible.  The policy condemns many Indigenous people, including A’uwẽ-Xavante, to certain infection and premature death.  Brazil’s COVID-19 policies and protocols for Indigenous People are criminal and genocidal. They undermine all institutions (FUNAI, SESAI, IBAMA) whose responsibility is to respect, protect, and fulfill the rights of Indigenous Peoples. They also violate Indigenous Peoples’ rights to health and safety as guaranteed by Brazil’s national Constitution (article 231), as well as ILO Convention 169 and the United Nations Declaration on the Rights of Indigenous Peoples.

On May 28, 2020, the Secretary of Health from São Félix do Araguaia confirmed the third case of COVID-19 among A’uwẽ-Xavante of Mato Grosso, Brazil.  The first confirmed case was a 40-year-old woman who tested positive on May 13, after receiving treatment in a dialysis clinic  from a nurse who died in the city of Barra do Garças, MT.  The second case was confirmed on May 18, an 8-month-old baby who, after being transferred to the Paulo Alemão Regional Hospital in Agua Boa, died on May 11. The third case is a man, age 61, whose name remains undisclosed.  Both the second and third cases are A’uwẽ-Xavante from the community of Marãiwaitsédé, located in the Marãiwaitsédé Indigenous Territory in northeastern Mato Grosso state. After presenting with COVID-like symptoms at the Basic Health Post in the town of Alta Boa Vista on Thursday May 27, the man was transferred to the Araguaia Regional Hospital in São Félix do Araguaia. A Rapid Test for COVID-19 returned a positive result. 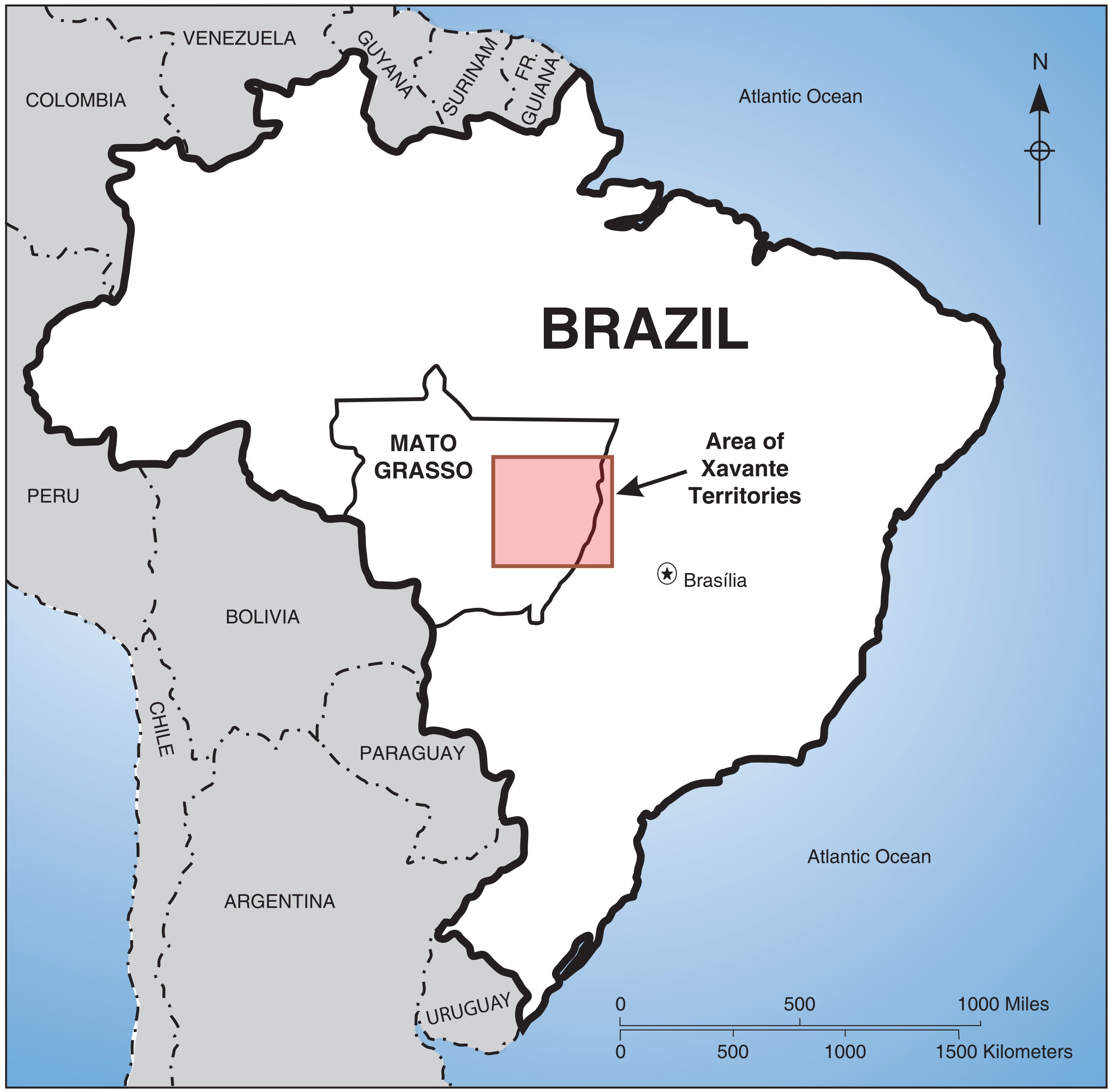 In what is likely to be a death sentence for other A’uwẽ-Xavante in Marãiwaitsédé and surely elsewhere, the hospital discharged the patient. He was sent back to Marãiwaitsédé with some medications to be overseen by a local Indian Health Service professional and instructions to remain in “domestic isolation.”

Domestic isolation is impossible in A’uwẽ-Xavante communities where up to 30 people, and sometimes more, live together in small, multigenerational houses that have poor ventilation and no inside sanitation or running water. A’uwẽ-Xavante dwellings typically have no fixed walls. Neither A’uwẽ-Xavante family members who will be  the sick man’s caretakers nor the few local health professionals are equipped with any Personal Protective Equipment (PPE).  There are no gloves or shields and few face masks in A’uwẽ-Xavante communities, or other Indigenous communities in Brazil.  Household members cannot possibly protect themselves from contagion while living under the same roof as a COVID-19 patient, not to mention while caring for a sick and infected individual in the same home.  And, since local health professionals are often Indigenous health monitors who have little training and lack resources to cope with any serious illness, they are set up to become easy targets for blame when disaster hits.

The recently diagnosed 61-year old is a survivor of a 1966 measles epidemic that devastated the group from Marawãitsédé shortly after they were airlifted by the Brazilian Air Force to the Salesian mission at São Marcos. Their relocation was arranged by the corporate owners of  Fazenda Suía Missu, which had fraudulently acquired the A’uwẽ-Xavante territory and whose investors included the Vatican, in a deal  worked out with  the Catholic Church and the Brazilian state.  The area’s original inhabitants  had become a burden to Fazenda Suía Missu, then Latin America’s largest landholding, after the Fazenda failed in its  attempts to transform the hunter-gatherers into productive day laborers.

Following  a decades-long battle to recoup their former homeland, which was officially demarcated in 1998, the Marawãitsede refugees were able to finally reoccupy their territory only in 2005. During the two years before they courageously decided to re-enter their lands, the refugees camped along the roadside in precarious shelters. They faced armed gunmen who prevented their reoccupation and deliberately contaminated their water supply.

Since taking possession of Marawãitsédé, the group led by Damião Paridzané has suffered continuous violence, harassment, and illegal land grabbing. Failing to properly isolate and care for COVID-19 positive patients makes local health officials complicit with the region’s wealthy landowners and corrupt politicians who, for decades, have unremittantly attempted to thwart A’uwẽ-Xavante’s efforts to peacefully live on their land.  Through health officials’ neglect, the pandemic is now doing the dirty work of killing Indigenous Peoples.

The Brazilian state’s failure to provide adequate housing and care for Indigenous COVID-19 patients who must be quarantined away from their communities and cared for in isolation is criminal and amounts to genocide. Given the highly contagious nature of the virus, returning the infected man to Marãiwatsédé condemns others to certain exposure.  More cases of COVID-19 can be expected to erupt in this community, as they have in other Indigenous areas such as near Manaus and in the Rio Negro region where Brazil’s Indigenous Peoples currently suffer high rates of COVID-19 infection and death, and where the Indian Health Service declared it will no longer serve Indigenous residents in the town of São Gabriel da Cachoeira where the majority of residents are Indigenous. Since some residents from Marãiwaitsédé visited another A’uwẽ-Xavante community to celebrate ritual activities on the weekend of May 16-17, the pandemic is likely to unfold elsewhere in A’uwẽ-Xavante Territories.

Leaders in other A’uwẽ-Xavante communities are taking note. In the Pimentel Barbosa Indigenous Territory,  leaders report that they are barring entry to outsiders and isolating their communities. Tsuptó Buprewẽ reports that elders in the community of Pimentel Barbosa canceled ceremonies and are planning community-wide fishing expeditions and a return to traditional collecting activities instead. Jaimíro Tsuwépté from Eténhiritipa similarly reports that, rather than heading to supermarkets in town, community members are fishing more.

Brazil’s failure to prevent the spread of COVID-19 within Indigenous communities is -- like several bills and pending administrative reforms, such as Draft Bill 191, Proposed Bill 2633/2020, and Institutional Norm #9/2020 – yet another example of gross humanitarian neglect and breach of its responsibility to protect the rights and lives of its Indigenous Peoples. The Bureau of Indian Affairs (FUNAI) and the Special Indian Health Service (SESAI) are charged with protecting the nation’s Indigenous Peoples and now, during the pandemic, with tracking  and providing proper care for all Indigenous COVID-19 cases, both suspected and positively identified.  Positive cases should never be returned to their villages, which are not equipped to guarantee isolation. They must be treated by trained professionals and in properly equipped facilities according to WHO guidelines. The São Félix do Araguaia Secretary of Health’s decision to return the COVID-19 positive man to Marawãitsede flagrantly violates WHO guidelines and recommendations, and flouts FUNAI’s responsibility to protect and insure the safety and health of the nation’s Indigenous population. It signals a grim return to Brazil’s genocidal policies of the 1960s that caused thousands of Indigenous deaths. The number of Indigenous COVID-19 cases mounts daily.

-- Laura R. Graham is an anthropologist at the University of Iowa.

To make a contribution to the Xavante Warã Association’s COVID-related work, click here.