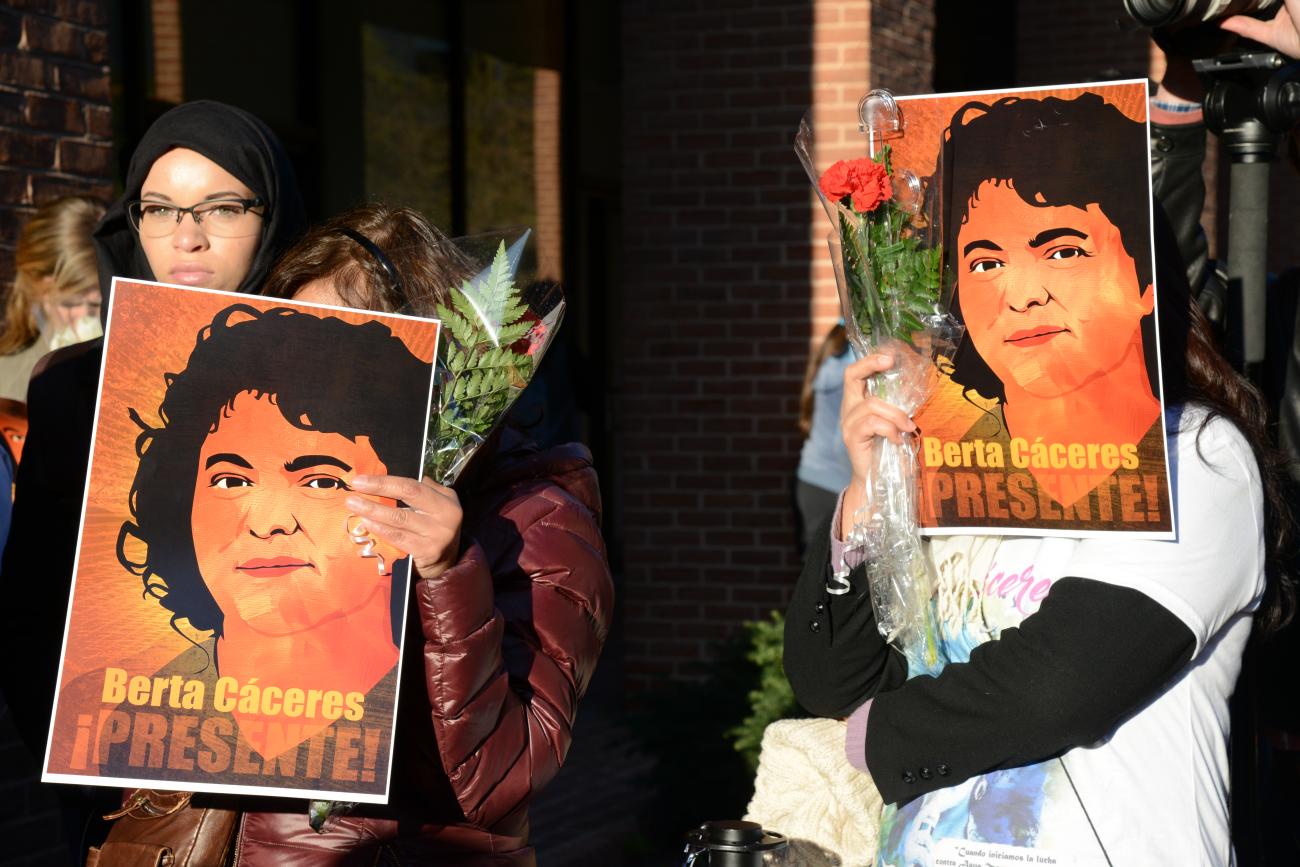 March 2, 2017 marks the one year anniversary of the murder of Berta Cáceres, Honduran Lenca activist leader who had successfully campaigned to stop a hydroelectric project in Lenca territory. Berta was a beloved Indigenous rights and environmental leader whose influence has continued to inspire activists a year later. The Honduran government has yet to charge any of the people behind the murder and a recent Guardian article reports that leaked court documents raise concerns that Berta’s murder “was an extrajudicial killing planned by military intelligence specialists linked to [Honduras’s] US-trained special forces.”  Eight men have been arrested in connection to the murder, three of whom have connections to the military. Two of these men had also been to La Esperanza, the town where Berta lived, several times in the weeks leading up to the attack, and another was the manager of the Agua Zarca hydroelectric dam that Berta had opposed. The Guardian’s legal source is quoted as having said, “It’s inconceivable that someone with her high profile, whose campaign had made her a problem for the state, could be murdered without at least implicit authorisation of military high command.”  In addition, Gustavo Castro, the sole witness to Cáceres’ murder, remains in exile and in on February 17, 2017, another Honduran Indigenous leader and activist was assassinated. José de Los Santos Sevilla, a Tolupan leader and a teacher in La Ceiba was attacked in his home. According to Mayor Alexander Rodríguez of La Ceiba, the police have launched a full investigation. The Tolupan community have faced years of threats and crimes for taking a stand against illegal logging and mining operations destroying their resources without consent. Sevilla’s death came just two weeks after police arrested a suspect in Cáceres’ murder in the same region of Honduras.

Cáceres’ organization, Consejo Cívico de Organizaciones Populares e Indígenas de Honduras (COPINH) and others are looking to the occasion as an opportunity to celebrate not only Cáceres’ life and legacy, but also to celebrate the 24 years COPINH has been working to improve the conditions and protect the rights of Lenca communities in four states of western Honduras. COPINH defends Lenca environmental, cultural, economic, social, health, education and Indigenous rights as well as Lenca territory and natural resources. COPINH continues to advocate for confronting patriarchal, capitalist, colonial and racist systems that threaten Indigenous Peoples and have stopped at least 50 logging projects and 10 hydroelectric dams that would have threatened Lenca communities. COPINH was also part of the movement that pressured the Honduran government to ratify ILO Convention 169, which includes the right to Free, Prior and Informed Consent.

COPINH is calling for an international mobilization for justice for the attacks and Other Worlds, a woman-led education and movement support collaborative has been working to launch Latin American movements and organizations supporting “Berta Vive, COPINH sigue!” On March 2nd, COPINH calls on “the world to strengthen justice—from your homes, communities, mountains, rivers, spiritual centers, organizations and offices. We'll light a white candle together, accompanied by other natural elements of your choosing: water, seeds, flowers, medicinal herbs or anything else that you want. This will symbolize a political, feminist and spiritual action for Berta's family and the communities of COPINH, to keep demanding justice for Berta Cáceres' assassination, and to remember her spiritual presence in all of our paths and territories in resistance. Let the candles burn overnight to call for justice for Berta.”

Here is a list of COPINH actions taking place in March in cities around the world including Boston, Chicago, and San Francisco. COPINH is also calling for the organization of marches, rallies, and candlelight vigils outside Honduran embassies across the globe on March 2nd. In addition to rallies on March 2nd, COPINH is also calling for supporters to flood social media with a number of hashtags including #JusticeForBerta, #1YearWithoutJustice, and #MarchForBerta. COPINH writes on their website, “In all of these potential proposed actions, and all others that your creativity gives rise to, let the world shake with the cry of: “Berta lives on, COPINH is strong!” Berta vive, COPINH sigue!”

For more information about Berta Cáceres and COPINH visit copinh.org and find them on Facebook at COPINH and on Twitter @COPINH-Honduras.