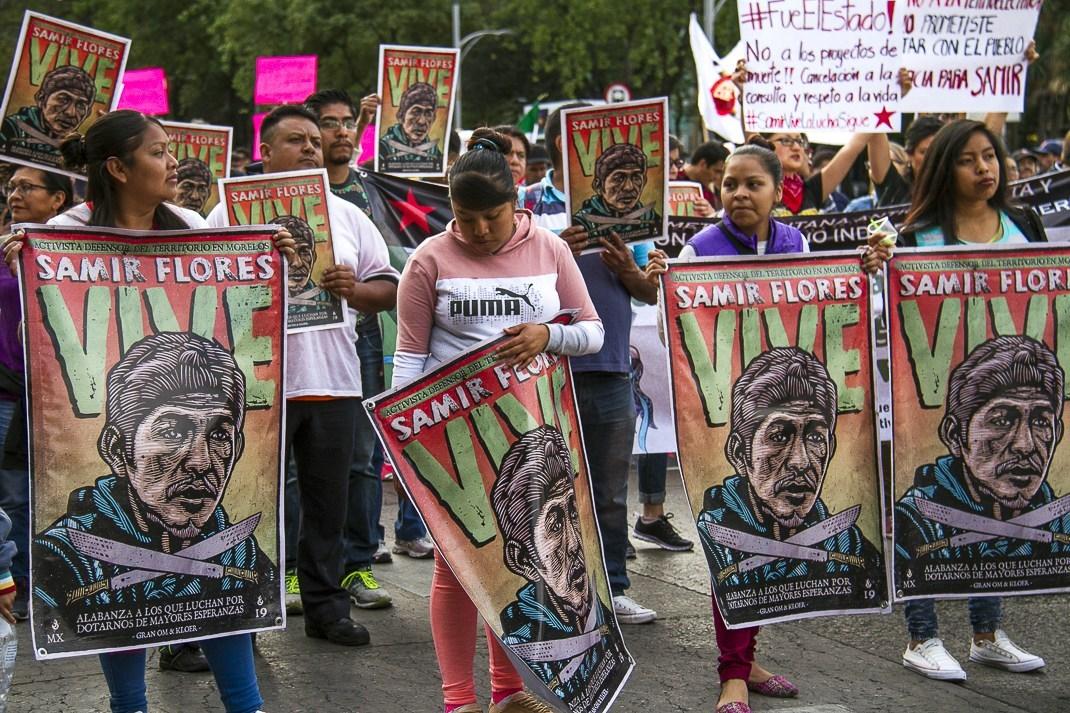 Samir Flores Soberanes, Indigenous rights and environmental defender from the Nahua community of Amilcingo, Morelos, Mexico, was shot four times in the head on February 20, 2019.  The murder occurred just one day before a community referendum on a thermal-electric project pushed by the Mexican President Andrés Manuel López Obrador, a leftist-populist who took office in December of 2018.

Samir Flores Soberanes was a well-known and deeply respected leader in his community, where he had co-founded the community radio station “Amiltzinko” in 2014. Through his platform at the radio station, and as a member of the Frente de Pueblos en Defensa de la Tierra y el Agua (FPFTA),Samir was a high-profile organizer for land rights and autonomy of the Nahuatl community in the face of externally-imposed development project, Proyecto Integral Morelos.  “Samir was an example to all of us for his activism and hard work, promoting the autonomy of Amilcingo and the defense of our territory against the Proyecto Integral Morelos. He had been threatened on various occasions, beginning in 2012,” stated the National Indigenous Congress in a press release.

A multi-faceted project initiated in 2010, Proyecto Integral Morelos includes two thermoelectric plants located in Huexca, Morelos, licensed to Spanish company ABENGOA; a 160km natural gas line passing through 60 communities in Tlaxcala, Puebla, and Morelos, licensed to Spanish companies ELECNOR and ANAGAS and Italian company BONATTI; 20 km of power lines; and an aqueduct bringing 50 million liters of water daily for use by the thermoelectric plant. The project also involves the construction of highways and train routes to improved access to the plants.

Since the early stages of the project, the communities affected have advocated for their right to Free, Prior and Informed Consent. But community members recount company representatives knocking on doors, visiting each home individually and saying, “If you are not going to accept the project, you should know that your neighbor already did. Do you want it, or don’t you? If you don’t we’ll call in the army.”

Samir’s community of Amilcingo, located on the outskirts of the Popocatépetl Volcano, was the site of an initial phase of the gas line, which is now installed under their farmlands, running through areas marked as high risk for earthquakes and volcanic activity. The community fears the frequent tremors and threat of lava flow make their lands an unsafe location for miles of delicate underground gas pipelines. “This is a ticking time bomb. If we’re trying to escape from the lava on one side, over here we’ll be facing explosions of natural gas,” explained a member of FPFTA to Subversiones.org.

The community’s food sovereignty is also at risk. Agricultural production of corn, amaranth, sorghum, squash, yams, and peanuts are the center of the community’s diet and economy, but in recent years crops have already started to fail. With the nearby Cuautla River destined as a dumping site for industrial waste water, combined with the deviation of ground water for industrial use, farmers are deeply concerned as their livelihoods and lifeways depend on the land.

After the community brought complaints to the National Human Rights Commission, the case was decided in their favor. The community should have been consulted before the gas line was installed, respecting their right to self-determination and Free, Prior and Informed Consent. Yet, President López Obrador, following in the footsteps of previous administrations, continues to argue that the Proyecto Integral Morelos is legal and will bring positive development to the surrounding communities.

The day before his assassination, Samir Flores Soberanes and his neighbors in Amilcingo attended an informational forum organized by Hugo Erik Flores, a local delegate of the López Obrador administration. According to the National Indigenous Congress, at that meeting Samir and his colleagues questioned the veracity of statements by the federal government regarding the benefits of the project.

On February 10, Samir attended a protest in Cuautla where President López Obrador spoke in favor of the proposed project, and criticized the “radical left” as conservatives who are opposed to development. The next day, the FDFTA issued an open letter in response to López Obrador sharing the concern that his declarations in support of the thermoelectric project were inflammatory in an already tense and hostile situation that has been created between neighbors by the imposition of the Proyecto Integral Morelos. The letter invited him to reconsider his position and sit down to dialogue.

Within 10 days, Samir Flores was murdered.

Amilcingo has organized to boycott the consultation on the project that was scheduled for February 22-24. FDFTA declared, “Mr. López Obrador, thousands of people trust you to improve the conditions of our country, we warned you that this could happen, and you chose not to listen to us. Today no one can bring our compañero back. We demand justice for Samir and for all of the communities who have been affected by the Proyecto Integral Morelos. We can not engage in a legitimate consultation while our community members are being assasinated.”

Cultural Survival stands in solidarity with the friends, family, and colleagues of Samir Flores Soberanes at Radio Comunitaria Amiltzinko in denouncing this violent act and demanding an immediate and impartial investigation into his death. We reiterate the right to self-determination of Indigenous Peoples and call on Mexican authorities to cease any attempt to move forward on the Proyecto Integral Morelos until a legitimate process of Free, Prior and Informed Consent is conducted in a climate free of violence and intimidation.