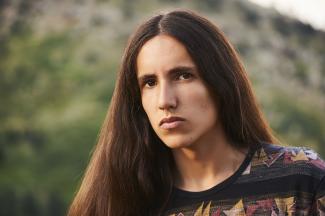 Seventeen-year-old Xiuhtezcatl Martinez has been at the forefront of a youth-led, worldwide environmental movement since the age of six. Motivated by the belief that the Earth must be protected and preserved for future generations, Martinez has delivered his calls for action to world leaders at the Rio+20 United Nations Summit in Rio de Janeiro and the UN General Assembly. For the past 11 years, he has delivered speeches around the world about the urgent need to address climate change for the sake of generations who will inherit the Earth we leave behind. His work has been featured by PBS, CNN, HBO, MTV, National Geographic, Rolling Stone, Vogue, and many other prominent media outlets. His strategy for change not only targets those in power, but also embraces grassroots approaches driven by young activists wanting to address climate change in their local communities. In his new book published last year, We Rise: The Earth Guardians Guide to Building a Movement That Restores the Planet, Martinez provides a step by step guide for how to live more sustainably while building a movement that tackles climate change, fossil fuel extraction, and industrial agriculture.

We Rise is an examination of the failure of current world leaders to solve the climate change crisis while positioning the creativity and passion of youth as a solution for the future. “Everything I’m trying to do is based around inspiring youth to step up as leaders in solving the crisis we’re facing. In my travels, I’ve been blown away by how many incredible things are taking place across the planet. Young people are fighting like hell now so that generations down the road will never have to struggle in the way we have…. They give me faith that the world we pass on to the next generation will be a planet worth inheriting,” Martinez writes. As the youth director of Earth Guardians, an organization of young activists committed to addressing climate change in their local communities, Martinez is building a movement from the ground up. With thousands of youth-led Earth Guardian Crews in more than 35 countries around the world, his movement and message is spreading through the work of young activists. We Rise lays out the steps for people to start Earth Guardian crews in their own hometowns and to encourage youth to become leaders in their communities.

Martinez says he wrote the book as a means for reaching out to people, especially youth, who are angered by climate change and want to do something about it. “Writing the book was definitely inspired by the anger and apathy that I saw amongst my generation, especially after the election. A lot of people were very upset, marching in the street without direction or grounding. I wanted to reach out to people to get them involved . . . while helping change the way we see environmental issues.” Martinez adds that the narrow way in which we view climate change needs to be reconstructed, something that can be done through new creative solutions and technology that we have at our disposal in society. He advocates for young innovative minds to embrace their “passions, motivations, and creativity, rather than just adhering to the traditional thinking of those in power.” Disillusioned by the ineffectiveness of world leaders and the complete disregard of U.S. leaders to tackle climate change, Martinez offers a call to action: “Risks to the environment are pulling us in the direction to act now more than ever. . . . We [younger generations] have a different kind of investment in the future because there’s a greater responsibility for us. A lot of the adults in the world aren’t going to be here by the time some climate conditions starts taking effect in the world.”

Martinez and 21 other youth plaintiffs have taken their message for change to the top by filing a lawsuit against the U.S. government for failing to protect them from the adverse impacts of climate change in Juliana v. United States. They are demanding that the Trump Administration uphold their rights to life, liberty, and the pursuit of happiness, all of which are threatened by the country’s rampant destruction of the environment. The federal government and fossil fuel industry have attempted to have the case dismissed, but U.S. Magistrate Judge Thomas Coffin denied their requests in March 2018; the hearing for this landmark case is set for October 29. On the local level, Martinez, along with other Earth Guardian members, has worked in his home city of Boulder, Colorado to get pesticides out of parks; to contain coal ash; and to impose moratoriums on fracking, reflecting his message that action at the local level can spark broader systemic change.

Martinez credits his environmental activist mother and Mexica (often referred to as Aztec) father with instilling in him a duty to preserve the environment: “My responsibility to protect the planet was never really in respect to being an activist. I felt that just as human beings, we have to protect our lands, our earth, our water. That was always the main driving force behind what I do . . . raising awareness around different environmental issues led to involvement in environmental activism,” he said in an interview with Cultural Survival. Martinez explains that his Mexica heritage and culture has shaped his sense of responsibility to protect the environment and those who will inherit it. “My dad played an influential role in contextualizing my life, my voice, my path, seeing it as a way to leave something beautiful behind in honor of those who came before me; in honor of those who struggled through oppression and genocide, helping me to recognize that we are here now because our ancestors fought for us to be here. Now I carry that responsibility for future generations.”

In addition to being an activist and author, Martinez is a hip hop artist who uses his music as a platform to share his message and stories with the world. “I’ve been writing music since I was seven and writing hip hop since I was twelve. I’ve had the amazing opportunity to share my music worldwide. I think historically hip hop has played a really important role in being the voice of the voiceless. Now that we see so many issues surrounding our world and our society, the culture of hip hop is a way of influencing the masses, especially young people,” he says. His upcoming album, Break Free, features the singles “One Day” (ft. Isa) and “Blue Ink” with lyrics about the struggles of growing up as an activist in the spotlight. “For me, it’s therapeutic. I’ve been involved in this role forever, going through different struggles. Hip hop is a way of letting go and telling stories in a way that hopefully other people will connect with. A lot of young people that have passions don’t have an outlet. I am lucky enough to have an outlet and to be able to continue evolving in my community,” he says.

In the face of obstacles and challenges in a society that so often favors corporate interest over protecting the environment, Martinez reminds his readers, supporters, and fellow activists, that “We are not just rising, we are winning.” He ends his book with a passionate call to action, lending a sense of urgency and hope to all who wish to preserve the planet for future generations. “The time has come for us to put aside everything that divides us and rise together like the oceans to turn the tides.”