In April 1999, the Xavante Education Fund will enter its fourth year. This far, the project has enabled a young Xavante man named Lino Tsere'ubudzi Moritu to complete his secondary education. Lino will receive his diploma in December 1998 and join a handful of Xavante men who have worked hard to finish high school away from their communities in Brazilian schools. Also in December 1998, Lino will take University entrance exams, known as the vestibular in Portuguese. Typically the vestibular reinforces class and racial divisions in Brazil's universities. Cultural Survival's special project has permitted Lino to study full-time at a good secondary school. He is well prepared for these exams. He hopes to gain admission to a five-year program of graduate training to become a nurse practitioner.

Lino will be one of only five Xavante to seek a post-secondary education. He will be the first Xavante to receive advanced training in Western medicine. Medical attention for the approximately 6,000 Xavante is highly deficient. A few communities have health posts, however, medical facilities are non-existent in most of the six Xavante reserves. Lino, a survivor of a measles epidemic that devastated Xavante communities in the early 1960s, seeks to make health care and information about public health accessible to Xavante, by a Xavante, in the Xavante language.

Lino is interested in learning about Western biomedicine so that he will be in a position to assess the advantages and disadvantages of Western practices and compare them with traditional healing practices. His education will help move Xavante into a position of strength when dealing with Western medical practitioners. Lino will be able to assess when Western medical treatments would be appropriate for ailing Xavante or when other treatments may be called for. He will also be able to evaluate when combinations of the two medical systems would be most appropriate. His knowledge of two systems will enable him to facilitate interactions between Western healthcare providers and help to make Xavante seeking treatment aware of their options. Ultimately he hopes to decrease Xavante's dependence on outside providers of Western biomedicine.

For the last two years Lino has been involved in a public health initiative in several Xavante communities. The project, sponsored by the National Indian Foundation (FUNAI), is designed to inform Xavante about public health concerns, specifically about sexually transmitted diseases and HIV. As Xavante increasingly interact with outsiders they risk exposure to STDs. In fact, today two Xavante men from communities near the Brazilian town of Xavantinha have contracted STDs. HIV looms as a threat for Xavante and other Brazilian Indians. Three Indians from central Brazilian groups (Karajá and Guajajara) receive medical attention for HIV at the FUNAI Casa do Indio where Lino works as an intern. As part of the FUNAI-sponsored project, Lino has traveled to several Xavante reserves to provide information about STDs and HIV in Xavante. He and other project members are producing a video to further disseminate their message to Xavante.

Lino's dream is to someday form a traveling medical team of Xavante health care providers. The group would consist of Xavante practitioners, including dental care providers, who would visit, give treatments and provide public health information to Xavante in their communities.

While Lino continues his training, Xavante Indians of central Brazil are vigorously mounting opposition against government plans to promote industrial shipping on waterways that border two of their largest reserves. The multi-million dollar project would devastate the environment Xavante depend on for their livelihood and would exacerbate unjust social and economic conditions in the area. For the Xavante of these reserves, the Hidrovia Project is the biggest threat they have encountered since their historic fight for lands in the late 1970s and early 1980s. The project, also known as the Central-Northern Multimodal Transport Corridor, would transform the most extensive river basin of central Brazil and the eastern Amazon into a commercial waterway. The Hidrovia is designed to support barge convoys transporting principally soy products to ports in Europe where it will be used primarily as feedstock for pigs and chickens.

The project's primary beneficiaries would be agribusiness corporations and shipping and construction companies involved in its development. In fact, the Hidrovia would represent a considerable public subsidy to expand soy monocultures throughout the cerrado or savannah and transition rainforests. Amazon indigenous peoples and others who depend on the river's flora and fauna for their survival are those who stand to suffer the most. In addition to the Xavante, the Apinajé, Javaé, Karajá, Krahô, Krikati and Tapirapé would be affected. In all, the Hidrovia would directly affect the lives of more than 10,000 indigenous peoples.

Xavante leaders from the Association of Pimentel Barbosa village denounce the project and are campaigning to stop it. The project would cause irreparable environmental damage to the river system, pollute its waters, alter wetlands and destroy food sources that Xavante rely on. The increased water traffic and influx of people that would inevitably accompany the project would mean more illegal trespassing onto Xavante lands, increased exposure to prostitution, alcoholism, disease (especially sexually transmitted diseases) and exacerbate social tensions in the area.

Xavante are especially concerned about agricultural toxins that would be transported on the river. They point out that the transportation needs that the hidrovia is designed to serve could be easily addressed by paving existing roads in the area. They advocate completion of the BR158 highway which, prior to four electoral campaigns, has been partially completed and soon thereafter abandoned. Xavante demand exploration of transportation alternatives, including the Ferronorte and North-South railroads, for which no serious study has been made.

In total, the project would alter 2,719 km. of the Tocantins-Araguaia-Rio das Mortes river system; its channels would require permanent maintenance. The construction of the Hidrovia involves the deepening and widening of the river as well as the destruction of rock outcroppings and the construction of dams. The completion of this project could lead to a greater occurance of erosion and flooding, increased pollution and accidents and the alteration of biologically important wetland ecosystems, as well as the loss of millions of dollars in tourist revenue.

Indigenous Opposition to the Hidrovia

In June 1995, the Docks Company of the state of Para and AHITAR officially requested authorization to begin construction of the Hidrovia from IBAMA (the Brazilian Institute for Environment). In December, 1995 AHITAR and the Foundation for Research Support and Development (FADESP) produced a Preliminary Environmental Impact Study. This assessment was publicly proven to be grossly inadequate at a hearing in the Congressional Environment Committee in November, 1996. The same parties that produced the first study are conducting a follow-up study This is expected to be made public in early 1999.

Xavante opposition to the project dates to an historic meeting held in October, 1996 that brought together representatives from all villages in the Pimentel Barbosa and Are...es reserves. At this meeting Xavante leaders produced the Cachoeira Declaration which they directed to Brazil's President Cardoso. The declaration states:

In June 1997, through legal action advanced by lawyers at the Brazilian NGO Instituto Socioambiental in Brasília, the Xavante succeeded in obtaining a federal court order prohibiting work on the Hidrovia. Lack of an environmental impact statement and the failure to meet constitutional requirements for projects affecting indigenous peoples, including "consultation" and obtaining a special congressional authorizing act, were cited as reasons for the injunction. Since then, federal officials from the Ministry of Transport and FUNAI (National Indian Foundation) have attempted in vain to coax Xavante leaders to accept compensation, including fishculture and agricultural projects, and "millions of dollars." Subsequent to their victory in the courts, representatives of one village unsuccessfully attempted to attack a soy barge that passed the Pimentel Barbosa reserve, in spite of the construction embargo on the river. Shortly thereafter, members of another Xavante village boarded a barge in the illegal port of Agua Boa and and stole everything on the vessel. Xavante from Pimentel Barbosa are using small boats supplied by the World Wildlife Fund, which has a wildlife management project in the area, to patrol the stretch of river bordering their reserve.

Karajá indigenous leaders have also opposed the Hidrovia. In December, 1997, they wrote an open letter to voice their position on the Hidrovia. They stated, "We don't produce soy or raise cattle to transport on the barges. This project is not for our benefit, and instead it will hurt us. There is no point in providing us with compensation, because in the supermarkets we will not find turtles, fish, and other wild animals." At a recent meeting of the Council of Indigenous Missionaries (CIMI) in Brasília, regional representatives who work with the Karajá, Xerente, and Tapirapé peoples discussed the possibility of bringing together representatives of indigenous groups from throughout the region who would be affected by the Hidrovia. Such a meeting would open up the possibility for a broad based expression of indigenous opposition.

Now that Brazil's presidential elections have taken place October 4th, 1998, the Xavante plan to send a delegation to Brasília. In the nation's capital they intend to make their concerns public to government representatives and to members of the national and international press. They have printed T-shirts to disseminate their opposition message and to raise funds to support their cause. Brazil's President Cardoso appears to be sensitive to public interest on the Hidrovia. 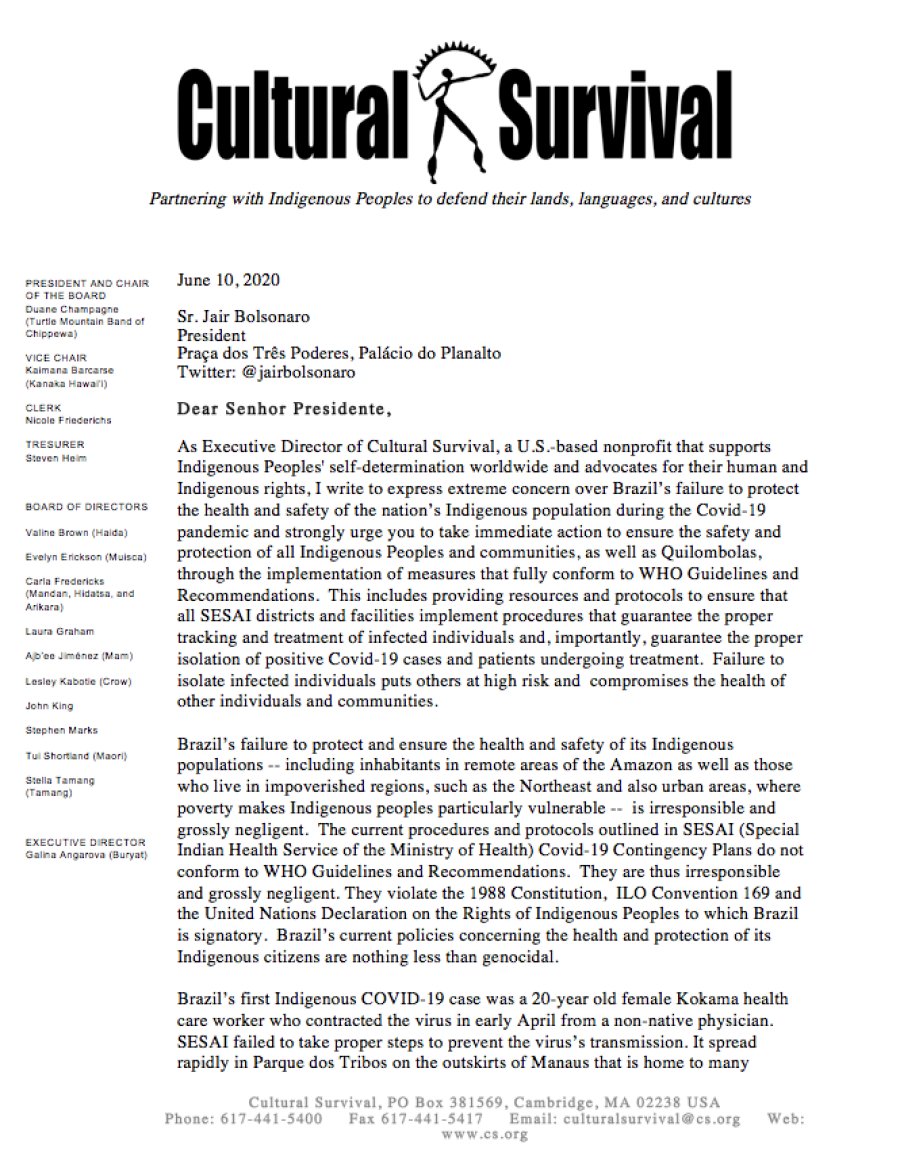 Open Letter to Jair Bolsonaro: Brazil is Failing to Protect the Health of Indigenous Peoples During the #COVID19 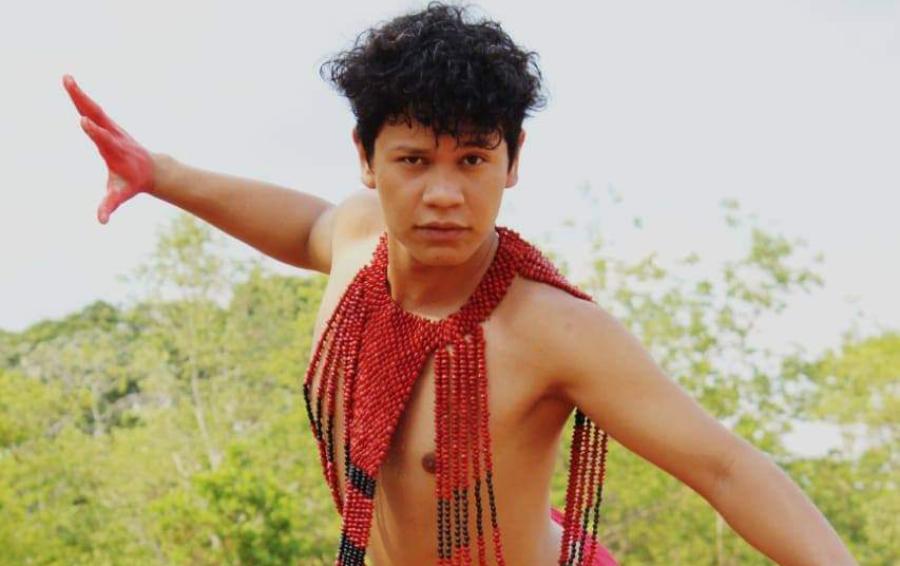 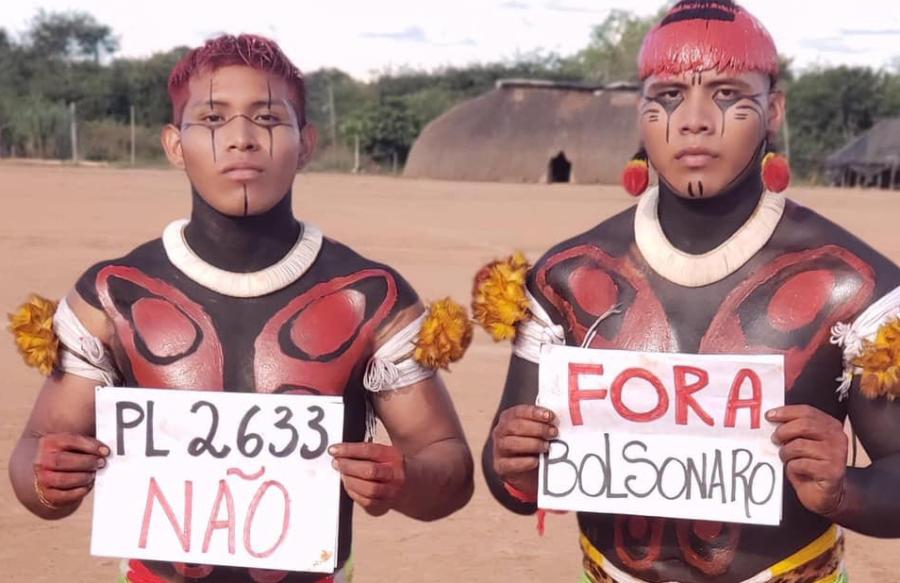 After a Recent Victory, Indigenous Peoples Face Many Legal Battles in Brazil