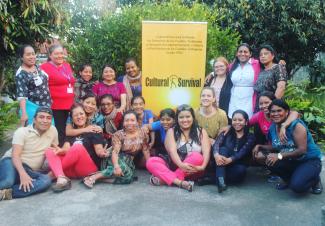 On March 16–20, 2017, 16 Indigenous women community journalists, ages 19 to 54, from Guatemala, Nicaragua, Honduras, El Salvador, Costa Rica, and Panama gathered in Guatemala City to strengthen capacities in radio production and exchange experiences, all within the framework of a critical analysis of discrimination faced by women. “This workshop taught me that as women, we should not put limits on ourselves. As human beings we have no limits, and there are no differences between men and women besides genitals. If we suffer discrimination it is because they create the differences in minds because of hegemony and patriarchy. Therefore, as women, even if they tell us that we cannot do something, if we fight we will achieve great things. I am sure to accept the challenges because every challenge is an opportunity to contribute to the construction of a more just world for men and women. My challenge as a community journalist is now to bring this message to my community through the radio,” said Bessi Ramírez, (Nahuat Pipil) radio journalist from Radio Sensunat, Sonsonate, El Salvador.

Participants from all over Central America filtered into the Indigenous Women’s Political Association Capacity Building Center in Guatemala City throughout the day on the day before the commencement of the workshop. For many it was their first time leaving their communities, and for most it was their first time leaving their countries. It was an exciting and scary experience and meant considerable risk for many of the participants. Due to the issue of travel safety in some of their home countries, personal male accompaniment was arranged for portions of some of the women’s trips. One woman even had to cancel her participation at the last moment because her male colleague was no longer able to travel with her.

The first welcome activity took place late in the evening to accommodate for the latest arrivals. Rather than using words to introduce themselves, the activity had all of the women dancing around, giving hugs, sharing eye contact, laughing, shouting, and generally having a lovely time. The energy in the room was vibrant, and many were teary-eyed at the power of this first experience. Foregoing formal introductions with names and nations of origins, it was a breath of fresh air to first be introduced soul to soul with soon-to-be friends and colleagues.

The next morning at breakfast, there was already a poignant feeling of sisterhood in the air. The first activities of the day mirrored those from the night prior in the women’s capacity to skip the formalities and dive straight into the depths of shared humanness. The Movement of Power exercise instructed participants to stand silently at one end of the room while statements were announced and walk to the other side of the room if the statement applied, or stay in place if it did not. Confronting shared and distinct experiences of privilege, discrimination, marginalization, and pain, women looked each other in the eyes, noting who had shared in their experiences of oppression and who had not. In some cases (“have you ever been scared to walk alone for fear of being raped or assaulted?”), most women found themselves together. In other cases, (“did you have to leave school early to help your family to earn a living?”), the room was split almost equally and participants were forced to look at their distinct experiences of loss and privilege in the eyes. On occasion, women found themselves alone, either in their privilege or their marginalization.

Having confronted their shared and distinct experiences of patriarchal power relations, the workshop participants were prepared to embark on a journey of critical learning about gender dynamics, intercultural feminism, patriarchy, and radio production. For most of the women it was their first introduction into concepts related to gender dynamics and intercultural feminism. Thus, a full day of the three-day workshop was devoted to discussing and reflecting on new concepts and ideas, such as feminism, misogyny, machismo, patriarchy, etc., and relating them to the women’s lives. Lauriz Diaz, Guna community broadcaster from Guna Yala, Panama, reflected, “I didn’t know what the words ‘misogyny,’ ‘sorority,’ or ‘feminism’ meant before this. I mentioned that I wanted to give classes to the women in my community through the radio because most of them are illiterate. Now I know what to teach them because of the new concepts I learned.”

On day two, the women’s newly acquired knowledge was integrated into journalistic exercises and radio production, and on the third day, they produced and edited spots promoting equality and the active participation of women within patriarchal systems. Participants worked in three groups, each accompanied by a producer, producing a total of 18 radio pieces to be broadcast not only on their radio stations but on all Spanish-speaking community radio stations in Cultural Survival’s vast network. Ramirez commented, “in my [community radio station], we make productions that denigrate women without even realizing. It isn’t direct, but there are double meanings and it is invisible. If we are trying to respect women in the radio, we cannot continue with spots like these. I’m going to bring with me the commitment to speak to my team about fixing this.”

This process of professional capacity building, developed by Cultural Survival with the support of the Channel Foundation, had the objective of strengthening the visibility and leadership capacity of women journalists for the development of their own radio spaces and the promotion of actions in favor of gender equity and non-violence. “We recognize that every woman is like a world, with different experiences and learnings. As a facilitating team we had to consider for the success of the process [to be] developed in three days and not five as we expected, because we had to adapt it to the tight agendas of every woman and her different roles. It is important to recognize the effort of each participant to be in a process like this. Many of them, to arrive to Guatemala, had to travel for four days between arrival and return, leaving children and responsibilities at home,” said Teresita Orozco, Cultural Survival program associate.

As the workshop came to a close, the women joined their evaluation groups to talk about what they had learned and what they hope to learn in the future. On the whole, the workshop exceeded participants’ expectations, as they demanded more support, especially in the technical and professional realms. Responding to these requests, two follow up workshops are set to take place in Guatemala and Nicaragua in September of this year. Building on the theoretical and practical skills that were the focus on the first workshop, the second will emphasize improving locution, scriptwriting with inclusive language, and audio mastering to improve the quality of their radio programs. The women’s introductory level understanding of the study of gender, intercultural feminism, and social structures of inequality will be enhanced with more critical and interactive discussions on the initial concepts. In future processes, the goal is to provide more complex editing workshops for the women whose voices resonated this desire to become more experienced broadcasters.

The sentiment behind this initiative can be encapsulated in a statement by Suzanne Benally, Cultural Survival’s executive director: “The rights of Indigenous women are crucial to our collective rights as they stand on the front lines as mothers, sisters, aunts, grandmothers—as women leaders concerned about the survival of our planet, the future of the next generations, our children and those yet to walk the earth. At Cultural Survival, we believe that for Indigenous rights to be respected, protected, and fulfilled, women need to be involved at every level.”