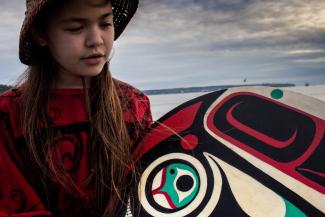 Ta’Kaiya Blaney, age 12, from Sliammon First Nation, British Columbia, Canada, has been an environmental activist since she was 8 years old. Her singing, songwriting, and acting reflect
her concern for the future of the planet, especially the preservation of marine and coastal wildlife. In addition to her environmental activism, she advocates for Indigenous Peoples’ rights
internationally. Her song “Shallow Waters” was a semifinalist in the 2010 David Suzuki Songwriting Contest. Kaimana Barcarse (Native Hawaiian), Free, Prior and Informed Consent Initiative Radio Series Producer, spoke with Blaney at this year’s UN Permanent Forum on Indigenous Issues.

When I was eight years old I saw an article in the newspaper about the Northern Gateway Pipeline, which is a pipeline from Bruderheim, Alberta to Kitimat, British Columbia. It crosses over 45
different First Nations territories, putting at risk 45 different cultures, 45 different languages. Yes, 45 different languages and these diverse cultures are being put at risk because of money, because of greed. But even before that I was very involved in the environment—not in activism, but in taking walks and listening to the birds and sitting down and just absorbing the beauty of life and nature.

Sliammon was very lush and very beautiful in the parts where it wasn’t destroyed, but at the same time I was noticing the parts that were destroyed. Our old village was called Tishosum, meaning Place of the Spawning Herring. We were forced out of our own territory and there are no more herring there anymore; I was aware of that even at a very young age. That doubt and that worry—could this be the future of Sliammon? All of it just came flooding back when I saw that article, and from there I just decided to write a song.

I’m a singer/songwriter and I decided to write a song about a future where this oil spill from the Northern Gateway Pipeline and from the supertankers…reminding people that this oil spill is very possible. A lot of people in British Columbia can’t imagine BC without that beautiful, lush quality because it’s so in front of you, it’s so real; it’s such a big part of our lives. But you know it is a possibility if this does happen. So from the age of eight I’ve been involved in opposing this project. I wrote a song called “Shallow Waters,” and from there I came here.

Sliammon Nation, a Nationless People
In Canada we have a proclamation called the World Proclamation of 1763. It states that we are entitled to jurisdiction over our land and over any corporation that wants to be doing anything that would possibly pollute our land. We have that right unless a treaty has been signed. That is why most of BC is unseated UNCDB territory, meaning that there have been no treaties signed over that land. But my nation, the Sliammon Nation, has recently been going through the treaty process of selling our land to the government. We’re not only signing our lands, we’re signing away our Indigenous rights. There has already been a provincial signing, and the federal signing is coming up. With the provincial signing, we are a nationless people. The Sliammon Nation is not a nation anymore. All of this really concerns me. It makes me think, what will be given to my generation by the time that the children who are not born yet are my age? What will be left for them? What will be given back instead of taken from Mother Earth? That’s the question for the Sliammon Nation.

My ultimate goal is stopping the Sliammon Treaty, and the first step that I’m making is bringing awareness—because there is no knowledge about the corruption and the fraud that has been happening in our community outside of the borders of our territory. I’m very involved in the opposition to the Northern Gateway Pipeline, and there is quite a lot of media covering this—but there is not a lot of media covering the injustices happening within Sliammon. I really want to bring a spotlight to the corruption and to the Sliammon Nation.

Youth Taking the Reins
It’s so important for youth to be involved in this movement because it’s our own future that corporations, that the government, are putting at risk. They’re putting at risk our water, the land, and the future of Indigenous people. I went to Tunza, a UN youth conference on the environment, and it was there that I saw so many children from all over the world that were involved in social justice issues and environmental issues. To see hundreds of kids there, it was amazing. Someone came up to me and said, “Oh, kids, they’re not going to do anything,” and I said, “Hey, I’m a kid, and you’re wrong!” We really are doing something. We’re finding our voice, now more than ever.

I’m working to change my community, to create a sustainable future. I always had that dream, but it was along the lines of “when I grow up...” like it was a very distant thing. But when I saw that article in the newspaper about the pipeline, I just realized, age doesn’t matter. It’s one heart, it’s one dream, it’s the one future that we’re all living towards. You know, you have adults, you have elders, and you have chiefs, and very inspiring people who are leading this movement, but they get tired speaking everywhere. If you incorporate youth and children in spreading the message, it’s more than chasing the dream of a sustainable future that coexists in harmony with Indigenous people and their culture and Mother Earth.

On Starting a Revolution
When they say it takes a community to raise a child, it also takes an environment to raise a child. A majority of today’s youth are not being exposed to the environment, so basically there is a generation that’s being raised that’s disconnected from the environment. Once you’re disconnected, you lose a sense of caring. How are you supposed to care for something that is so alien, that you do not know? I’m starting an organization called Earth Revolution, which is a youth movement named after my song. It’s focused on empowering and inspiring youth and supporting them in their chase for their future. The chorus of the song goes, “We’re Generation Now, Children of the future, Earth’s Revolution / Creation’s crying out, I feel her pain, I can’t walk away / I’ll do my part to fix what’s broken, and give back what we’ve taken, to hope for the dawn of a new day / I’m calling each and every person, join me in Earth Revolution.” So the movement is really about my generation, this generation, and empowering and inspiring and supporting youth.

The creator gave human beings a voice; there’s a reason that we have the power to communicate. It’s because we’re supposed to speak out for those who have no voice. To speak out for those voices who go unheard. So use that voice—as long as you have that voice, you have to use it. Everyone has been given a gift. Share it. That’s what I tell people, and it is what people need to do.