We Will Work to Implement It 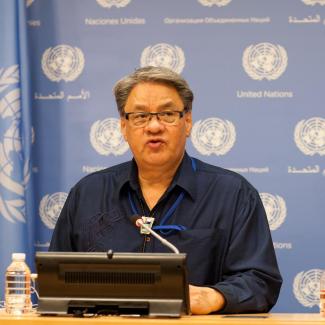 We are making progress at the international front. The Declaration is now embedded in many of the UN agencies that are part of the follow up, the Inter-Agency Support Group and the System-wide Action Plan. It is also included in the 2015 Paris Climate Change Agreement. It is included in the 17 Sustainable Development 2030 Goals (SDGs). Countries have been using the Declaration. In a very important case [Proprietors of Wakatū & Rore Stafford vs.Attorney General] in New Zealand on land rights for the Māori people, the Declaration was recently used by the High Courts as an important reference to recognize the rights of the Indigenous Peoples. The challenges are still far greater than the positive changes that have been made. But, now people are using the Declaration as a very important framework, we need to continue to pursue that. We can’t let the foot off the gas. We need to continue to press it as hard as we can.

There are incredible challenges in countries in Africa and Asia where Indigenous Peoples are not considered Indigenous. There is a major problem even by those state parties who have supported the Declaration. We need to work continuously each and every day to make the governments recognize and implement the Declaration. For example, in Canada, in 2006, at the Human Rights Council in Geneva, Canada voted “No”; they voted against the Declaration. On September 13, 2007, they also voted “No.” The only country in the world that has voted “No” twice. We have been working with them, and pressuring them. Now, we have a [Trudeau] government that says we will implement the Declaration, we support it without qualification and we will work to implement it.