We Want to Chage that Stigma 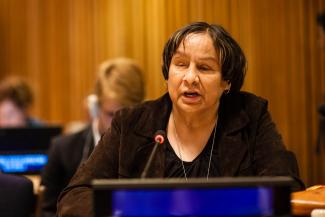 Our focus at the UNPFII has been twofold: one, to get into the Permanent Forum, which I believe we have been successful in doing just from having the formation of the caucus and our network. And [two], the numerous interventions we have been able to make on the floor. The message I believe that we’ve been putting out there is around inclusion and participation, and this year I have tried to more specifically define what we mean by inclusion and participation. People see us here participating, they see us in the meeting rooms, they see us on the floor making interventions. But what we want is not only [them] seeing us as being there, but also seeing us as capable to be successful and to achieve; moving away from the charitable perspective or the medicalized perspective, seeing us as sick or needing protection, and often times pitied. We want to change that stigma. We want to remove those barriers that keep people thinking of us as incapable. Instead we want people to see us as Indigenous Peoples first, and then as Indigenous Peoples that have disabilities. But that doesn’t preclude us from fully participating in the Permanent Forum and other UN processes.

I don’t consider myself an Indigenous person with special abilities or disabilities. I actually dislike that word, “special,” because somehow to me it connotes or implies it’s something outside the ordinary and I want people to stop thinking of us in that way. As a person with a disability, my people, the Dakota People, and other nations within Canada, I think have fallen under all the impacts of colonization. It’s something that I’ve been talking with other people about, culturally looking at the beliefs and traditions and values that our people have held about people that were maybe a little bit different, people with disabilities, even people that were too spirited, that kind of thing, and how they were viewed. And so far, what I have seen tells me that we were seen possibly as being different, but at the same time we had a role within the community, we had a place. Some people believe that Indigenous Peoples with disabilities are gifted, that they have some kind of spiritual ability, that kind of thing. My personal view is that I don’t think most of us have a gift, or are special, not any more than what you say you might have. If you are a spiritual person and you believe that the creator can give you a gift, then obviously I think that can go to anybody.

What I think is important is that as an Indigenous person with a disability, that lived experience that I’ve had because of having a disability has helped shape who I am as a person. And if I have any gift or if I have anything that perhaps distinguishes me for who I am, it is the passion that I have for working to change the environment, to change the lives of people with disabilities, for myself and anybody else. As Indigenous Peoples with disabilities, we have rights. We have rights like anybody else. We have the right to expect, to be treated just like anybody else. We have the right to dream and to aspire to do things like be successful, whether it’s in education or it’s in some kind of a job or career; to raise a family, if we want to get married. We should have those same expectations as anybody else. Just because you have a disability, whatever that may be, whether it’s physical, sensory, intellectual, or whatever, that doesn’t mean that you don’t have a right to live like anybody else. And I think that it is important to empower people with disabilities because once people are informed, [once] you give people information, they can begin to stand up for themselves, they can speak out for themselves. That’s how you make changes. That’s what I would say to people that aren’t here.

What we need is for the systems to change, we need people to adopt things like the principle of universal design, universal access, which means that when they create something or are fixing something, whether it’s a physical building or an environment, that they fix it in such a way that it benefits not only a person with a disability, but everybody, so it’s not something special; it’s something that will benefit society as a whole. And I remind people also that a disability—maybe it’s not the most trendiest or sexiest issue—but disability knows no boundaries. Not to scare people, but disability can happen to anybody. That should hopefully urge people to pay attention. Because one day if it happens to you, or someone else, you’re going to need the environment to be user-friendly to you as a person with disabilities. So that would be my caution, what I would ask people to think seriously about: look at us as people that have rights. Don’t pity us, don’t feel sorry for us, but help us and make things so they are supportive. Help us to be independent.

Photo: Doreen Demas from Canada speaking at the UNPFII in 2013. Photo courtesy of Broddi Sigurdarson/ UNPFII.