We, Maasai: Revitalizing Indigenous Language and Knowledge for Sustainable Development in Maasailand, Kenya 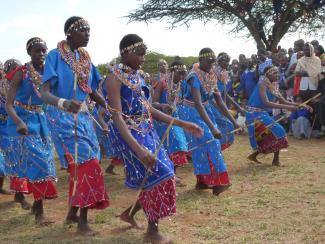 We, Maasai, still have much of our culture, customs, and tradition as we did thousands of years ago. Because the Maa society does not have a clear written history, it is difficult to say precisely where it originated. According to linguistic research, the Maa language is hermetic and not one of the numerous Bantu languages on the African continent. It is believed that the Maasai originated somewhere in the Middle East and came down the Nile River to our present territory, the plains of East Africa. This is confirmed by the numerous Maa-named places dotting this route. Over the
years, we have built a rich Indigenous knowledge system that has allowed us to survive in harsh environments and seasons.

However, the Maasai, like many other Indigenous Peoples, are fast losing our languages and cultures. Maa is an oral language that has not been documented and is therefore vulnerable to extinction. Other written languages, such as English and Swahili, are quickly finding their way into our communities through formal education, religion, and globalization. Elder Parkesian recalls, “Our fathers never wanted us to go to school but the British colonialists insisted and a few were reluctantly sent. They knew we would lose our language and culture and then get lost.”

Today, many Maasai regret that the Maa language was not passed down to them. Sharoni Nangurai, a college graduate and a current student of Maa language voices this regret: “I lost the dream opportunity of getting [an] internship and working with UNEP simply because I couldn’t speak Maa, and yet [I] am a Maasai by birth. I blame my parents for this.”

Globally it is estimated that a language dies every 14 days. If the current trend continues, by 2100 over half of the more than 7,000 languages spoken on Earth—many of them not yet recorded—may disappear, taking with them a wealth of knowledge about history, culture, the natural environment, and the human brain. Much of what humans know about nature is encoded only in oral languages. Indigenous groups that have interacted closely with the natural world for thousands of years often have profound insights into local lands, plants, animals, and ecosystems—many still undocumented by science. Studying Indigenous languages and cultural practices therefore benefits environmental understanding and conservation efforts. Indigenous Peoples and local communities, who depend entirely on their natural environment and traditional sociocultural, economic, and spiritual life skills that are encoded and orally passed from one generation to another, are at a great risk of assimilation and subsequent extermination. Every time a language dies, we lose part of the picture of what our brains can do. Every fallen sage is tantamount to a burnt library!

To address this threat, the Center for Indigenous Languages and Cultural Studies, a project of Simba Maasai Outreach Organization (SIMOO), a nonprofit community-based organization
working with the Indigenous Maasai pastoralists of Kenya and Tanzania, was established. Based in Ngong Hills the Center for Indigenous Languages and Cultural Studies seeks to revitalize and promote spoken and written Indigenous languages. It also seeks to streamline traditional knowledge and Indigenous practices to complement the conventional approaches to combating poverty in a bid to achieve sustainable development. Chief Daniel Sankale says, “This is the best and sustainable way to preserve our culture. . . by teaching the youngsters the language and culture and
documenting it for posterity.”

Protecting, preserving, and promoting a language is no easy task. The Center conducts research related to culture and development to establish the relationships among culture, peace, development, and environmental sustainability. Funded by the International Society of Ethnobiology, we are researching and documenting Maasai cultural practices such as rituals and ceremonies for posterity. The research is then compiled into materials and used for teaching and reference. This provides a basis for a rights-based approach to advocate for favorable policies both locally and internationally. We have been organizing a cultural field day where school children and parents come to participate in an annual three-day event where cultural presentations are staged to inform the community about their rights and connections to global issues.

Elder Mary Sakuda, 86 years old, says, “When we lose our land, we lose our language and then we lose our culture. . . we become like slaves of others.” The Center is also documenting culture, language, songs, and other cultural practices for posterity. We do this in printed and/or digital form by developing short videos, audio phrases, and online materials. School children conduct interviews with elders and translate from oral to written form. Story books are being compiled to preserve oral knowledge as elders pass on. Ole Kurraru, a 90-year-old elder, praises the program:
“This initiative needs to be encouraged. Unless something is done, at this rate of alien encroachment and assimilation, there will be no Maasai [speakers] in 50 years to come.”

To address the need to revitalize threatened languages and cultural practices, the Center offers linguistic lessons, cultural orientation, and experiential learning. Classes are currently offered for Maasai who have lost fluency in the language. Teaching and reference materials have been compiled to serve as resources in the classroom, and the development of a Maasai–English dictionary is underway. During the holidays, the Center offers camp-based experiential learning for urban students. In addition to learning the Maa language, the students are exposed to environmental education that will allow them to understand and identify the role of plants and animals in the Maasai culture. Students also gain appreciation for aspects of the Maasai way of life such as herding and bead work, and get to live its spirit. Edward Simel, an early student of the Maa language class explains: “It is very embarrassing to have a Maasai name and lineage but not be able to speak the language. I was brought up in Nairobi where my parents worked and where I went to school. I lost touch with my community, I lost the language and I lost the beautiful culture. This is a great opportunity for me and my kids to learn the language and some aspects of the culture again.”

The Center also has a global goal in mind, to promote global understanding of the Maasai culture. Cultural exchange among people of diverse backgrounds is important for harmony, peace, and sustainable development. Exchange programs involve Indigenous Maasai visiting other parts of the world to share their culture, or international students coming for internships in Maasailand. The international exchanges are supported by Frogpond Production in PA. We, the Maasai, like many other Indigenous Peoples, are on the verge of losing our language and the rich Indigenous knowledge inherent in it. This will be a big loss to the global biocultural diversity and will be devastating to the environment. Safeguarding Indigenous languages is also a recognition of the existence of such communities as well as a promotion of their human rights. Unless Indigenous languages are protected, the gains made globally that have culminated in the UN Declaration on the Rights of Indigenous Peoples will be reversed. Sustainable development can only be realized if and when Indigenous Peoples are given an opportunity to exercise their right to cultural practices, including promotion of their native languages. For the Maasai, this is an invaluable legacy that we will be happy to bequeath to future generations.

— Daniel Salau Rogei (Maasai) is a founder of the Simba Maasai Outreach Organization in Kenya. To learn more, visit: simookenya.org.

To learn more about what is being done around the world to revitalize Indigenous languages, visit our Language Gathering site: languagegathering.org.