The Way Forward: How Indigenous Philanthropy Can Change the World 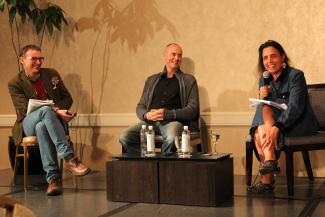 Indigenous philanthropy is cost effective, high impact giving, according to a groundbreaking report presented by International Funders of Indigenous People (IFIP). At the IFIP annual conference last year, case studies from pioneering funders who work with traditional communities around the globe provided data that Indigenous philanthropy is “the way forward.” That language is borrowed from the Intergovernmental Panel on Climate Change, the expert group of scientists responsible for research on global warming, who called traditional knowledge and Indigenous adaptation strategies “the way forward.”

It is unknown to what extent Indigenous people in remote regions of the world understood how global trading in mortgage securities precipitated an international economic meltdown—but there is no doubt that they are experiencing the impact. Even before this latest recession, Indigenous Peoples received less than .01 percent of international philanthropic giving from US foundations. As funders see their endowments shrink, Indigenous communities are suffering a decrease in support. One reason is the common perception among funders that traditional communities are too remote to take part in standard funding agreements. They are not perceived as riskfree partners with communications budgets, technological savvy, or business expertise. Their outsider status in industrialized culture is a liability.

IFIP is a group of funders interested in a new paradigm of giving that combines the best of Indigenous and industrialized cultures. At their most recent annual conference, funders inspired by their face-to-face encounters with Indigenous leaders stood up and affirmed their commitment to encourage their colleagues to support this important sector of international philanthropy. Working with Indigenous communities simultaneously meets the objectives of several usually segregated program areas from environmental defense to human rights, social justice, and sustainability.

At the conference, Tracy Austin, Executive Director of the Mitsubishi Corporation Foundation for the Americas, described the evolution of her perspective as an environmental funder: “At an [Indigenous Funders] conference I learned how the BINGOs (big environmental NGOs) were violating the rights of Indigenous Peoples.” After listening to Indigenous representatives describe the negative effects when funders favor familiar intermediaries over direct collaboration with communities, Austin changed her investment portfolio.

Impact on Indigenous Peoples is now an evaluation metric for her foundation. “Some projects do get avoided,” she said, “and some get improved upon.” Bringing a business perspective to the conference, Chip Conley, CEO of Joie de Vivre Hospitality, said that investment decisions need a new evaluation lens. Instead of the pure bottom line of the Gross Domestic Product, he endorsed the country of Bhutan’s creation of Gross Domestic Happiness. There is a growing realization that economic values need to incorporate other human needs beyond profit. Indigenous participants who have never used a barometer as narrow as the GDP warmly welcomed Conley’s message. However, Phrang Roy, coordinator for the Indigenous Partnership for Agrobiodiversity and Food Sovereignty, pointed out the complex challenges of evolving away from the current economic model based on constant expansion and resource depletion.

The Indigenous leaders who travelled from all over the world to attend the conference did not arrive empty handed. They came with stories that offered hope and replicable solutions demonstrating sharp business acumen. Winona LaDuke, founding director of the White Earth Land Recovery Program, described how her Native community is creating sustainability its own way by reviving ancient agricultural and fishing practices. Wayne Bergmann recounted how he grew up impoverished, as all Nyikina people do in Western Australia. After working as a tradesman he went to law school and eventually became CEO of the Aboriginal Kimberley Regional Economic Development Enterprises. He described how environmental groups were outraged when the Aboriginal peoples announced that they wanted to negotiate a fair deal to extract resources on their own land. The country’s main environmental groups could not reconcile the idea of Indigenous Peoples as “stewards of the land” negotiating commercial development directly with the government and gas companies, so they offered Bergmann a $1 million slush fund to stop. Instead of taking the offer, Bergmann negotiated a $300 million deal for his people that created a model system of protected areas monitored by Indigenous rangers, a cultural heritage center, an economic development agency, and an Indigenous philanthropic trust. “We need to walk in two worlds, where traditional law and culture stay strong and where we create our rightful place
in the modern economy,” Bergmann advised, acknowledging that the people of Western Australia won the right to their land and self-rule after decades of land dispossession and cultural genocide. Winning the legal standing to decide their own future gave them the agency and legitimacy that so many Indigenous Peoples around the world still lack. In light of this, Bergmann invited other Indigenous leaders to join him in a global network to share experience and resources, particularly for communities facing resource extraction from outsiders on their lands. “We are building a common database of ideas,” he proclaimed.

As an Indigenous funder, New Zealand Maori Che Wilson shared his peoples’ growing experience managing funds under the J.R. Mckenzie Trust. Wilson started out as a representative to the trust of his tribal community and later became chair of the trust’s Maori development fund. In the seminar Indigenous-led Funding Institutions, Wilson was joined by Jonella Larson White, Ququngaq member of the Alaska Native Fund Steering Committee, along with other leaders in the field of Indigenous-led philanthropy.

IFIP conferences are unique spaces for frank, productive conversations among donors and Indigenous representatives. In the final session of the conference, various funders asked IFIP to establish a database of successful collaborations between donors and Indigenous communities; IFIP is actively seeking sponsorship for this initiative. Two important new projects were also born: the first, a United Nations Declaration on the Rights of Indigenous Peoples toolkit for donors, will help funders apply the principles of the Declaration to their grant-making. The second, a funders database of projects, will provide funding models based on successful philanthropic Indigenous partnerships. The conference also made it clear that local meetings could help bring new donors into the network. As a result, the organization decided to hold three regional meetings around the world for peer-to-peer training in Indigenous funding. The three locations chosen for 2013 were San Francisco, Copenhagen, and New York City. Annual conferences will also alternate between US and international settings. In 2014, the conference will coincide in New York with the UN General Assembly’s first World Conference on Indigenous Peoples held in September. The funders group also moved from its home base on a Native reservation in upstate New York to the donor nexus of San Francisco. The move marked a new strategy to build membership and generate a broader base of Indigenous philanthropy, as this critical moment in the Earth’s history demands nothing less.

—Evelyn Arce is executive director of International Funders of Indigenous People and is of Chibcha descent.

To learn more about IFIP, go to www.internationalfunders.org