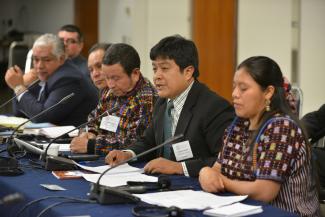 For over 600 years, they’ve denied us our voice. Today, we will vindicate our claims. Today, we bring a tiny grain of sand to this process,” Alma Temaj said on March 15 in the lobby of the Inter-American Commission on Human Rights (IACHR) of the Organization of American States in Washington, DC. It was an hour before the hearing on the Situation of the Right to Freedom of Expression of the Indigenous Peoples in Guatemala, in which Temaj and four other representatives of Guatemala’s community radio movement would have the opportunity to address, as Temaj put it, the “monoculturalism, discrimination, and racism” inherent in the Guatemalan state’s restriction of Indigenous communities’ access to radio frequencies.

As César Gomez, a Poqomam Maya Cultural Survival staff member, defined it in his testimony at the hearing, “Community radio is radio that belongs to a community organization, uses the Indigenous language in its programming, is nonprofit, and invites the participation of all sectors of the community, even government institutions.” Temaj, a Mam Maya leader in the Mujb’ab’ Lyol (Meeting of Expressions) radio association in Guatemala, characterized community radio as “an invaluable tool that contributes to the effort to strengthen and conserve our languages, culture, traditions, and worldview.” Community radio provides a platform for the diverse perspectives present within a community. In many rural communities, high levels of illiteracy limit access to print media; many Indigenous people speak only their native language, so mainstream radio broadcasting is inaccessible to them. Community radio is an ideal medium to address the distinct needs of small Indigenous communities. Indigenous Peoples are not only entitled to their own media as per the UN Declaration on the Rights of Indigenous Peoples; they are also guaranteed “special measures” to access those rights in the Inter-American Convention and ILO Convention 169.

Despite these guarantees and by Guatemala’s own 1996 Peace Accords and constitution, the Guatemalan telecommunications law does not allow licenses for community radio. Stations obtain licenses at public auctions, a mechanism that is inherently prohibitive for the budgets of small, non-profit stations whose operation depends, in many cases, entirely upon volunteers.

In October 2011, the community radio movement brought its case to the Guatemalan Constitutional Court, exhorting Congress to establish a mechanism by which Indigenous community radio stations could gain licenses. The government failed to do so, and the movement’s only recourse was to appeal to the intergovernmental body charged with overseeing human rights throughout the Americas, the IACHR, in September 2012.

On March 15, 2013, the five representatives of the community radio movement, Alma Temaj; Cesar Gomez; Salvador Quiacain, a Tz’utujil member of the Tz’utujil Comprehensive Development Association; Marcelino Nicolás Moscut, a Poqomam Maya member of the Community Radio Association of Guatemala; Leopoldo Zeissig of the Social and Labor Investigations Collective; and Cultural Survival’s Mark Camp, sat on one side of a table. Facing them across the room were representatives of the Guatemalan government. Three members of the IACHR sat at a third table to hear the presentation.

The Indigenous delegation spoke first: after Temaj’s introduction, Gomez asserted that the telecommunications law had led to a consolidation of frequencies among “a small group of companies that monopolize communication and exclude Indigenous Peoples from…being able to broadcast within their own cultural, social, economic, spiritual contexts …because of a clear economic, political, and legal disadvantage.” He cited the situation of community radio in the towns of Palín and Aguacatán, which were so desperate for access to frequencies that they had to mortgage all of their property and ended up with a debt that took 10 years to pay off. Gomez argued that because the Guatemalan government had never defined community radio, it could conflate nonprofit Indigenous community radio stations with other nonlicensed stations whose broadcasts cause interference, but whose missions could just as easily be for-profit or not community- related. He explained how in 2012 the Guatemalan Congress amended the law to enable current license holders to extend their licenses for 20 additional years and ratified legislation to penalize unlicensed radio operation with six to 10 years in prison. He attributed these actions to a “lack of political will” to legalize Indigenous community radio.

Gomez’s testimony was followed by an outline of the legal history of the issue and a reading of the delegation’s requests:
• that the IACHR urge Guatemala to stop persecuting community radios and close the office of the Attorney General for Radio, whose sole mission is to prosecute unlicensed community radio operators. • that the IACHR urge Guatemala to modify its legislation to accommodate the stipulations of the American Convention on Human Rights and establish a mechanism that permits Indigenous Peoples’ direct access to radio frequencies.
• that the IACHR Rapporteurs on Freedom of Expression and on Human Rights make an official visit to Guatemala and release a report on the situation of community radio.
• that the State of Guatemala, after this hearing, not retaliate against the petitioners or the managers of community radio stations.

In response, Gerson Lorensana, legal advisor to the Guatemalan Presidential Commission for the Coordination of Human Rights, did not explicitly address community radio or the Indigenous delegation’s requests. He used the term “illegal radios” and spoke of Guatemala’s concern that unlicensed broadcasts interfere with licensed broadcasts, claiming that the conflict is not between Indigenous Peoples’ right to freedom of expression and radio frequency allocation, but rather a problem of illegal use of radio frequencies.

Catalina Botero, IACHR Rapporteur on Freedom of Expression, mounted a vociferous opposition to Lorensana’s conflation of the concepts of illegal and community radio and his effort to redirect the discussion. “There’s a trap here,” she said. “[The State] has not bothered to understand what exactly community radios are, so it conflates them with illegal radios. The State sees a community radio as any radio without a license. So, as the State does not define community radio, it does not regulate it.” The United Nations Declaration on the Rights of Indigenous Peoples’ Article 16 states: 1. Indigenous peoples have the right to establish their own media in their own languages and to have access to all forms of non-indigenous media without discrimination. 2. States shall take effective measures to ensure that State-owned media duly reflect indigenous cultural diversity. States, without prejudice to ensuring full freedom of expression, should encourage privately owned media to adequately reflect indigenous cultural diversity.

Botero went on to attack the State’s defense that the “requirements for Indigenous Peoples [to obtain access] are the same as for any other person or entity. [The State] requires [Indigenous Peoples] to compete in impossible conditions,” she argued. “You certainly understand that an Indigenous community can’t compete with a for-profit company in an auction for license to broadcast.” Echoing the sentiment of Rapporteur Shelton, Botero claimed, “The right to equality does not mean treating everyone the same. It means treating those who are in equivalent situations equally, and those who are in inequivalent situations, differently.”

The commissioners’ favorable reaction to the community radio movement’s claims and requests is heartening. Yet the Commission’s official response to the hearing, along with its pending reaction to the petition that Cultural Survival co-authored and submitted to the IACHR, will not be binding on the State of Guatemala. Gaining the support of the international body is an important and powerful step in an effort to build international pressure on the Guatemalan government to act. Ultimately, it is only the Guatemalan Congress that can pass legislation to make it possible for Indigenous Peoples to operate community radio stations.

—Jessie Cherofsky is an intern at Cultural Survival and accompanied the Guatemalan community radio delegation to the Inter-American Commission hearings.