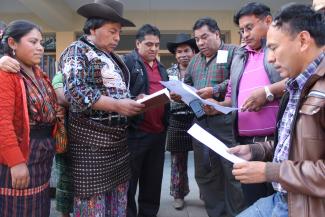 On December 9, 2014, Radio Juventud, beloved by the rural community of Sololá, was raided during station volunteer Olga Ajcalon’s women’s rights and education program. The station has been serving Sololá for over 10 years and has greatly contributed to educating and informing the surrounding communities. The majority of its programs are broadcast in the local Indigenous language, Kaqchiqel, and counts women, children, elders and many youth among its listeners.

Radio Juventud has joined the ranks of myriad other community radio stations raided by the Guatemalan Public Ministry because the current telecommunications law does not allow for non-profit community radio—despite its guarantee in the 1996 Peace Accords, the Guatemalan Constitution, and the UN Declaration on the Rights of Indigenous Peoples. For more than a decade, Cultural Survival’s partners have been lobbying the government for a legalization of community radio, with little progress. “I’ve heard of other stations being raided; I’ve just never experienced it myself,” Ajcalon said. “I’ve always believed that my work is necessary and fulfilling, but this raid forced me to believe that exercising my freedom of speech somehow meant I was committing a crime.”

Around 10:30 a.m., two police trucks carrying about 20 policemen arrived at Radio Juventud asking to see the owner of the building. They were accompanied by 10 government officials who spoke to the owner while the police proceeded to cut the power at the location. All visible equipment was seized, including a computer, transmitter, console, and microphones; even pens, papers, and photographs were taken. The raid lasted just 15 minutes. “No one ever claimed that the station was theirs. We all stated that the station belonged to the community even when the police were there and rudely interrogated us. We proved to the government that when the community unites, no force can take it down,” said Ajcalon.

Once the police and government representatives had left, Ajcalon proceeded to call Radio Juventud’s staff members. Staff agreed that the incident should be reported to the Indigenous municipal authorities in Sololá. Indigenous elders held a meeting at the Sololá Indigenous Municipality and reached the conclusion that Radio Juventud has been an important tool for the rural communities of Sololá, providing access to communication to many who would not otherwise have it. Alcalde Indigena Municipal (Indigenous mayor) Alberto Chumil Julajuj commented, “We are both shocked and offended that the government thinks they can make decisions without our consent. The radio is ours; it doesn’t just belong to the volunteers or the property owner, it belongs to Sololá, and we will not rest until our voices are heard and our needs met.”

Recognizing that Radio Juventud has protected the rights of its community, the community decided to stand up and demand the return of all the station’s equipment. “This raid really showed us that we are a community. We were attacked and we turned to our community for help, which they gladly gave because they felt a loss that was their own. We all fought for our rights and for our radio,” said a station member.

Non-profit community radio plays a critical role in the daily lives of hundreds of thousands of Indigenous people in Guatemala. Community radio stations broadcast in Indigenous languages and provide a vital and reliable source of news and information about health, human rights, development, the environment, and other issues critical to Guatemala’s Indigenous Peoples. Sololá’s Indigenous communities are informed of their rights as Indigenous people in part due to the efforts of Radio Juventud broadcasting the Indigenous Rights Radio programming produced and distributed globally by Cultural Survival.

Around 3:00 p.m. on the afternoon of the raid, over 50 Indigenous leaders marched to the Sololá courthouse and demanded to speak to the judge who had authorized the raid. They cited Article 16 of the UN Declaration on the Rights of Indigenous Peoples, the Guatemalan Constitution, and the 1996 Peace Accords in making the case for why the station is essential to their community and demanding a return of the seized equipment. The judge claimed that he had signed the order without understanding the effect it would have on the community.

Nevertheless, against all odds, on December 11 the judge issued a ruling for the equipment to be returned. “I was very happy to hear that we had won the case and that we were getting our equipment back. It was unbelievable—it has never happened before! We are so thankful to organizations like Sobrevivencia Cultural, Associación de Medias Comunitarias de Sololá, and the Indigenous municipality that supported us through this whole process,” Ajcalon said. Don Santiago Ajcalon, radio founder, listener, and property owner, added, “Hearing the judge rule in our favor was really hopeful because we are used to the justice system shutting us down. Indigenous people in Guatemala have suffered for so long at the hands of the government, but now we might actually have a chance at proving them wrong.”

On December 16, all equipment was returned to Radio Juventud. It was the first time equipment had ever been returned after a raid, setting a major precedent for community radio stations all over the country. However, when station volunteers tested the confiscated equipment in front of the Indigenous authorities, they discovered that the transmission console did not work. The piece necessary to fix it had to be imported, but Radio Juventud hoped to be back on air in February. “We are satisfied having our equipment back, but it’s also disheartening that part of it no longer works. We are so small and don’t make any profit, [and] we were told that our equipment would be fixed for Q10,000 (about $1,300),” Don Santiago said. “The government thinks they won, but we will come back on the air. We have to.”

Since 2004 Cultural Survival's Community Media Program has worked with a network of 80 community radio stations (including Radio Juventud) across Guatemala, El Salvador, and Belize, organizing training workshops and exchanges to improve operations and content quality and providing stations with programming on a regular basis. The programming covers important topics such as indigenous communities' right to Free, Prior and Informed Consent; reproductive rights and education; and caring for the environment. Last year Cultural Survival's Indigenous Rights Radio Program produced and distributed more than 300 radio programs in 20 languages to almost 1,000 radio stations in 55 countries, informing indigenous listeners about their rights to land, culture, and freedom of expression. Indigenous communities that know their rights and are organized can make the impossible happen! Learn more about our work at www.cs.org.