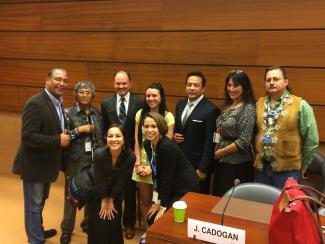 The second Universal Periodic Review of the United States on May 21 illuminated Indigenous Peoples’ rights with UN member states, raising many concerns in contemporary society. Rights raised covered the entire field of fundamental freedoms, from the right of self-determination to violence against women to implementation of the UN Declaration on the Rights of Indigenous Peoples.

The Review is a process conducted at the United Nations in Geneva that reviews each member state’s record with regard to its human rights obligations and commitments. Civil society is encouraged to participate in outlining the issues affecting their communities in regards to international human rights standards.

During all five phases of the Universal Periodic Review, Indigenous Peoples engaged on community, country, and global civil society levels using the UN Declaration on the Rights of Indigenous Peoples for the framework to collaborate in country-wide coalitions and also to diplomatically advocate with States. The Review also coincides with the global agenda of implementing the Outcome Document of the UN World Conference on Indigenous Peoples.

In the second phase of interaction, Indigenous Peoples spoke truth to power to the US government through multiple consultations and innovative diplomacy dialogues with foreign governments at UN Missions in New York and Geneva as well as US embassies in Washington, D.C. Indigenous Peoples participated in multiple side events hosted at the UN Human Rights Council from June 2013 through March 2015 where Indigenous rights were raised via Skype. On top of the side events, the US hosted consultations in Washington, D.C. as well as Indian Country in Oklahoma. A couple of consultations at the US State Department served as listening sessions where civil society would share specific concerns and propose recommendations in national policies and practices.

Indigenous Peoples actively engaged, walking in the footsteps of ancestral advocates to demand dignity in Washington based on the treaty relationship established centuries ago. Regarding the Review’s Diplomacy Dialogues, Indigenous Peoples participated in the New York and Washington meetings hosted monthly at universities in both cities. At each event, Indigenous Peoples shared personal stories of colonization and current neocolonialism efforts, including the Trans Pacific Partnership negotiations. From the first event at Howard University to the final one at Hunter College, Indigenous Peoples presented agreed upon issues, questions, and recommendations. One new model for Diplomacy Dialogue was hosted at the Permanent Forum on Indigenous Issues. During a side event, representatives from Taino in the Caribbean and Kanaka Maoli in Oceania addressed common challenges at the UN Development Program headquarters. Prior to the actual Diplomacy Dialogue, representatives were able to speak to over 40 member states by meeting directly with States in attendance at the 14th session of the Permanent Forum.

In the third phase of consideration, Indigenous Peoples were highlighted by the US administration. On May 11, the first Indigenous US ambassador to the United Nations, Keith Harper, opened the Review with a statement recognizing the lack of perfection but dedication to change and constant pursuit of justice. Harper cited the recommendations made by States regarding Indigenous Peoples and the subsequent action prior to the adoption of the first report for the US to be the final State to adopt the Declaration. He also cited efforts to eradicate violence against Indigenous women by empowering communities to address challenges.

Albania, Bolivia, China, Egypt, Finland, Macedonia, Moldova, Nicaragua, and Pakistan raised various Indigenous rights being denied in the United States of America. From generally encouraging the full implementation of the Declaration by Bolivia and Egypt, to specific proposals relating to violence against Indigenous women by Macedonia and Finland, the recommendations were based on testimonies and specific advocacy sheets of Indigenous Peoples. There was emphasis on Free, Prior and Informed Consent (FPIC) regarding consultation specifically when dealing with traditional sacred lands, as recommended by Moldova. China presented similar concerns regarding autonomy with FPIC including compensation for historical injustices. Alaska and Hawai’i, former states on the UN Decolonization List, were mentioned specifically by a couple of states along with Albania and Pakistan raising violations of rights from education to self-determination. Pakistan mentioned the former UN Special Rapporteur on the Rights of Indigenous Peoples from the report, citing paragraph 69 related to decolonization of Indigenous Peoples. Harper responded immediately, stating that the “Obama administration has been guided by tribal self-government as the North Star.” He also noted that the US will champion cultural repatriation of sacred objects and implementation of the UN World Conference on Indigenous Peoples Outcome Document.

In the fourth and fifth phases of adoption and implementation, Indigenous Peoples continue to coordinate through a working group to put forward recommendations. In the immediate aftermath of the Review, there was a formal consultation with the US government in the UN Palais des Nations. Chief Gary Harrison of Chickaloon Native Village in Alaska raised the issue of the US falling short of FPIC by not consulting the traditional chiefs. He also cited the 371 treaties ratified with Indigenous nations that deserve to be honored, confirming the recommendation made earlier regarding Alaska and Hawai’i for genuine decolonization. “We are prisoners in our own land. We don’t have any redress for these grievances,” he said. Petuuche Gilbert of the Laguna Acoma Coalition for a Safe Environment stated simply, “all of America was once Aboriginal land.” Gilbert continued to point out the federal lands claims that allow for mining on Indigenous sacred homelands.

Throughout the adoption phase, there have been followup trainings to gain input from Indigenous Peoples on the importance of the recommendations provided by member states. The spirit of resistance continued in the Town Hall meeting on July 20 with many people participating directly in Washington with opportunity for people across the country to call in. Working groups will be the main mechanism to implement recommendations leading up to the third cycle; the current working group is Economic, Social and Cultural Rights, Indigenous Peoples, and the Environment. Many people stated during the session that Indigenous Peoples must have their own working group. Indigenous Peoples are mobilizing for the September session of the UN Human Rights Council for the official adoption of the US Universal Periodic Review. They aim to secure seats out of the 10 available to speak for the 2 minutes at the adoption on September 25. The final phase of implementation is significant. The major achievement of the first cycle was the US changing position and becoming the final step to reverse its stance on the Declaration. Now it is imperative in the second cycle that Indigenous Peoples are demanding specific steps to realize the rights enshrined in the Declaration.

Photo: US representative to the UN Human Rights Council, Keith Harper (third from right), meets with the Indigenous Peoples’ Working Group after a Universal Periodic Review consultation in Geneva. Photo by Joshua Cooper.