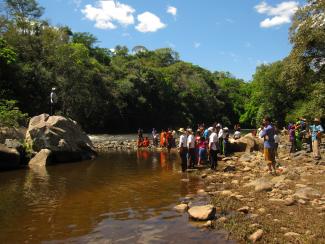 The Ngäbe Bugle people reside in western Panama. Together they are two of the seven original peoples that survived the Spanish conquest and subsequent colonization of Panama. At the close of the 20th century, the Ngäbe Bugle achieved a designation protecting their lands as an autonomous territory. Law 10, signed in 1997, created the region known as the Comarca Ngäbe Bugle and protected approximately 7,000 square kilometers of their ancestral land. Since then, these communities have been fighting to defend the integrity of this land.

During the 1980s, many years before the creation of this autonomous region, the Panamanian government began mineral exploration in Cerro Pelado and the western regions of Panama, and also began conducting assessments for the construction of a hydroelectric dam on the Tabasará River, which is considered one of central rivers for the Ngäbe people. In 1999, the Movimiento 10 de Abril was founded, made up by the Ngäbe and fellow campesinos with the single goal of halting the hydroelectric and mining development that the government had planned within the region. The acts of resistance taken by the Ngäbe Bugle people during this time solidified and strengthened the communities’ rights to their lands, keeping their resources out of the hands of foreign investors. But the government never removed this territory from the list of areas they had slated for the construction of so-called development projects.

In 2007 the Martin Torrijos administration approved a water concession for the company Generadora del Istmo S. A. (GENISA) for the construction of the Tabasará hydroelectric project on the Tabasará River. This project was anticipated to generate 19 megavolts and was located in an area adjacent to the autonomous region. GENISA is a Honduran company financed by three international banks (two of which are involved in the case of Berta Cáceres, the influential Lenca rights leader who was murdered in 2016 for her work opposing the Agua Zarca Dam on the Río Gualcarque in Honduras). For the past two decades, the Indigenous communities of the Tabasará have successfully stopped projects in their territory. Underwater Barro Blanco Displaces Three Ngäbe Bugle Communities in Panama Now, with the approval for exploration on this new project, the Ngäbe are again on alert.

In 2010, the President of Panama, Ricardo Martinelli Berrocal, approved an addendum for the hydroelectric dam on Tabasará. This addendum changed the name of the project to Barro Blanco and allowed it to be much larger, covering 2.58 kilometers of water and generating 28.56 megavolts. This expansion will directly impact three Indigenous communities from Bagamä located in the Ngäbe Bugle comarca. The affected communities were not consulted prior to the approval of the environmental impact study and the finalization of the concession contract. Many living within the affected villages would lose their lands, along with ceremonial archeological sites of vital importance to the Ngäbe Bugle people.

In 2012 the government tried to modify regulations on mining, which sparked the Ngäbe Bugle and campesino movement to organize blockades on different points along the Pan-American Highway. Excessive force from the military response left two dead and ten wounded. After the violent confrontations, a roundtable was established that concluded with an agreement to ban mining and hydroelectric projects within the territory of Ngäbe Bugle. This law was enacted after one month of dialogue, but despite the agreed upon terms, the Barro Blanco hydroelectric project on the Tabasará River continued. The government and the National Ngäbe Bugle and Campesino Coordinator maintained a roundtable mediated by the United Nations with the objective of managing the conflict surrounding the Barro Blanco project. Both parties decided to conduct a new impact assessment, but the company continued with the construction of the hydroelectric project.

In 2014 the government ordered the forced evacuation for the property of Manolo Miranda, a resident of Kiad, a small town in Bagamä, although it has been provisionally suspended by the Supreme Court. During the same year, the Supreme Court sided with GENISA in a legal action brought by the Ngäbe in 2010 based on the violation of the Ngäbe’s right to Free, Prior and Informed Consent during the initial phase of the project. Despite the disappointing ruling, the Ngäbe did not give up. They assembled a camp just outside the construction zone and waited for the machinery clearing the zone for the dam. This camp was stationed for four months at various locations around the project site and resulted in a series of confrontations during which several people suffered injuries.

In July 2014, Juan Carlos Varela Rodríguez was elected president under the campaign platform to cancel the project as soon as he assumed the presidency. In August, the minister of government, Milton Henríquez, visited the communities and pledged to establish a dialogue to put an end to the conflict, inviting the participation of affected peoples, traditional authorities, and elected officials. The roundtable was established in 2015 after the government accepted the Ngäbe’s condition to temporarily suspend the project. This dialogue was facilitated by the United Nations and lasted only four months, when it was dissolved by the affected communities after finding too many points of contention and a lack of will by the government to cancel the project altogether.

During various sessions, experts from the communities demonstrated that the the impact assessments of the Barro Blanco hydroelectric project had been deficient or incomplete and violated Panamanian laws. At the close of the discussions, the government lifted GENISA’s temporary suspension, allowing the company to finish construction of the dam which was very close to completion, and instead issued the company a fine of a mere $700,000 USD for irregularities in the environmental impact mitigation plan.

In disagreement with the demands of the affected communities at the roundtable, in August 2015 the government decided to start new negotiations, this time hand-selecting new participants in representation of the communities, excluding affected communities themselves. On May 22, 2016, the Public Services Authority of Panama circulated a press release announcing that the commencement of a test phase, during which they would fill the reservoir to 103 meters above sea level to test the functionality of the dam, indicating that the communities located within the project zone would be evicted. On May 23, more than 15 Ngäbe people who were camped within close proximity to the dam were arrested. In these arrests, the Panamanian government once again violated human rights by failing to evacuate the affected persons in accordance with national and international laws. They also failed to enact the order of the Supreme Court regarding the temporary suspension of the evacuation of Miranda in Kiad. While the reservoir tests took place, the Ngäbe mobilized across the country to blockade highways. Meanwhile, the government continued to showcase dialogue with Ngäbe leaders who supported the dam while seeking financial reparations. In August the government announced that they had signed an agreement with the leaders of the comarca, but communities affected by the dams denounced these agreements as illegitimate as they had not been consulted or included in the drafting.

On August 22, the president signed the agreement while onlooking community members threw rocks at them. After considering what had taken place, the government announced that the Ngäbe Bugle Congress is the only authority that can ratify the signed agreement, and on September 18 the congress voted against its ratification, as well as for the removal of the Ngäbe authority Cacique General Silvia Carrera, who had signed the agreement with the government a month earlier on behalf of the community.

To this date the conflict persists, and there is great uncertainty. Despite their communities being under water, the people continue to mobilize and maintain camps in different vigils throughout Panama. A popular phrase describing the community rings true: “El pueblo Ngäbe Bugle luchará por siempre, the Ngäbe Bugle people will never stop fighting.”

—Jonathan González Quiel (Ngäbe) trained at the School of Geography and History at the Autonomous University of Chiriqui. He is an Indigenous rights activist in Panama recently dedicated to mapping of environmental conflicts.