A Too Common Occurrence: Maasai Land Theft by Safari Company in Northern Tanzania 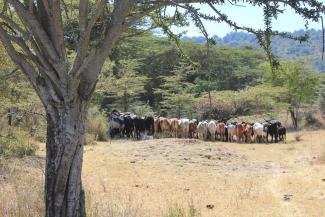 The expansive landscapes and large wildlife populations of Ngorongoro District in Northern Tanzania, which borders Serengeti National Park, make it a leading area for Tanzania's tourism industry. But the scenic beauty and pastoral ideal belie a much more complex and conflict ridden reality. For the land and the Maasai who have traditionally inhabited it, the past hundred years have been characterized by marginalization and loss. The story of Sukenya Farm is just one such example.

Soitsambu, Sukenya, and Mondorosi villages are located in Loliondo Division, Ngorongoro District, and are predominantly Maasai pastoralist communities. Land is managed according to seasonal patterns of resource availability, which are largely dependent on rainfall and governed by rotational grazing reserve systems. In 1984 Tanzania Breweries Ltd. (TBL) obtained 10,000 acres within the boundaries of Mondorosi and Sukenya villages, a property that came to be known known as Sukenya Farm. During this period, fraudulent land allocations were widespread throughout northern Tanzania and in Loliondo in particular. While TBL apparently obtained dispensation from the district and regional government to use the land, it did not obtain an official certificate of occupancy until 2004. This was for an increased area of 12,617 acres.

From the outset TBL only used about 700 acres, and in 1987 abandoned the land altogether. The three resident Maasai clans, the Purko (residents of Mondorosi), Loita (a minority clan in in Sukenya), and Laitayok (the majority of residents in Sukenya but a minority clan in the region) continued using the property as they always had: for season livestock pasture, critical watering points, temporary settlement during the rainy season, and access between subvillages.

The 2004 certificate awarded control of the land to TBL with a 99-year lease agreement backdated to October 2003. One of the conditions of the title was that the land be used for “plant and animal husbandry.” In 2006 TBL divested the remaining 96-year lease to a new American-owned tourism operation, Tanzania Conservation Ltd (TCL). Tanzania Conservation’s owners also own Thomson Safaris, a Massachusetts-based company that operates luxury tours on the disputed property, which it has developed into a private nature reserve known as Enashiva Nature Refuge.

According to the lawsuit brought in Tanzania by the affected villages, company security guards and police officers forcefully evicted the Maasai from the land, burning their bomas (livestock enclosures), destroying homes, and denying them access to the land. Since TBL had abandoned the land in question for more than 12 years, it should have reverted back to the local villagers. A Ngorongoro Conservation Area councilor commented, “We are like slaves in our own land. Natural resources have become like a curse to us; those benefiting are from afar while the real owners are suffering.’’ Said another: “The entire process of land acquisition is characterized by bribing, cheating, and dividing communities.”

With the access to Sukenya Farm prevented by TCL/Thomson Safaris, the communities’ herders were forced to make a 14-hour return trip to Kenya for water in the dry season. In addition, they lost access to a valuable grazing resource. Prohibiting community access to the land created a major conflict among the company, local government, and the villagers, the majority of whom consider that the land is still rightfully theirs to use.

The level of conflict between TCL/Thomson Safaris and local residents has markedly escalated in the last few years with numerous arrests and imprisonments, a shooting incident, and other alleged misconduct by the company’s employees and the police. Local civil society organizations and concerned individuals have attempted to help resolve the conflict, but thus far these attempts have failed, only increasing tension and mistrust.

In 2011 Soitsambu village sought to challenge TCL/Thomson Safaris’ right to the land with the support of Minority Rights Group International, the Legal and Human Rights Centre, and the Pastoral Women’s Council. While initially dismissed on a technicality, the case recommenced in 2013 and is due to be heard in mid-December. The villagers, assisted by EarthRights International, also petitioned US courts to obtain documents of the sale to support their Tanzanian court fight to recover their land, as well as damages for violent abuses and property destruction. “The land belongs to us whether we win the case or not. We have to use the land. We will never give up,” one community member said.

Maasai traditional leaders from across Ngorongoro district have gathered several times since 2013 in Sukenya village to discuss the conflict. One resolution was a strengthened collaboration among the three affected clans, which to date are still working together. Another was to ensure that the district council strongly support villages in the land fight. “We cannot keep quiet while our land is under the hands of land grabbers. It is our responsibility to see that land comes back at any cost,’’ said a council chairman.

In July 2014, herdsman Olunjai Timan was returning home from grazing his cattle near the disputed land when he was confronted by policemen and local TCL/Thomson Safari security guards. He was shot and left lying face down, alone. As news of the shooting spread through the villages 300 youth gathered in the night, prepared to enter the disputed land and burn the safari camp down. When elders heard the news they rushed to the stop them. They decided to pursue peaceful means instead of a confrontational approach, but the incident prompted the question, “What type of government is this that attacks its own citizens?”

At a council meeting after the shooting, a traditional leader implored the District Council: “I decided to stop my warriors from burning the camp because I want peace. There is no benefit for anyone to die now. We need this land for our cows and we can’t stop grazing or passing. Who are the legal owners? Those with only a piece of paper, or us who are born and living here for years?” Added a council member from Mondorosi, “We have just finished paying fines for the innocent herders who were told they trespassed in our land, and today one of us is shot again. We have to fight back and there is no way to keep quiet.” Echoing the sentiment, a youth leader averred, “We, the Maasai, are not those of 1959 when our grandfathers signed to be moved out of Serengeti. We will fight to the end. We will keep fighting for our land and rights."

An uneasy truce has been reached between the villagers and Thomson Safari, as villagers are currently allowed to access the disputed land for grazing. They are wary that this permission may be removed at will, but hopeful that the upcoming hearing will turn that permission into a right, with ownership of the land finally returning to them.

The most recent Tanzanian litigation commenced in 2013 by Soitsambu, Mondorosi, and Sukenya villages against Tanzania Breweries Ltd., Tanzania Conservation Ltd., the District Council, and the Commissioner for Lands. The villages are challenging the transfer of Sukenya Farm by TBL to TCL/Thomson Safaris, land that had been abandoned for over 17 years and continually used during that time by villagers for grazing, watering, and cultural rituals. The plaintiffs contend that ownership of the land reverted back to the villagers by adverse possession, that TBL had no right to transfer its certificate of occupancy, and that TCL/Thomson Safaris is therefore an illegal occupant. The villagers are seeking the revocation of TCL/Thomson Safaris’ certificate of occupancy and a claim for damages for the illegal occupation.

In February 2014, the Soitsambu, Mondorosi, and Sukenya village chairmen, assisted by EarthRights International, petitioned a federal court in Massachusetts for documents and testimony to support their fight in Tanzanian courts to recover lost land and damages for violent abuses and property destruction. The federal court granted the villagers’ application in April, ordering TCL/Thomson Safaris and the companies’ owners, Rick Thomson and Judi Wineland, to turn over documents and give sworn testimony about the sale of Sukenya Farm, the alleged home burnings and beatings, and the conversion of the land from Maasai grazing territory to a private reserve.