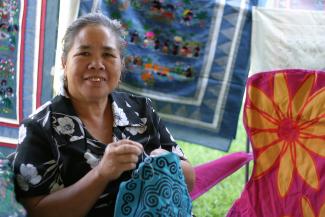 Originally from northern Laos, Chia Yang Khang, a Hmông artisan, lived in Thai refugee camps until she came to the United States when the Vietnam War ended. “The year I came to Thailand was 1976,” she says, “and I stayed there for three years. We came to this country in 1980.” Before departing from Laos, however, she learned Hmông embroidery techniques of reverse appliqué and batik that she continues to put into practice today. Khang has since developed these techniques to create a variety of beautiful pieces she now sells here in the United States. Hmông people are recognized for a traditional practice, Paj ntau, also known as flower cloth. The practice consists of the creation of bold geometric designs, often realized in bright contrasting colors and applied
to skirts for important ceremonial occasions. Khang enjoys playing with this contrast and potential variation of patterns: “I like to do everything I know [that] I remember, that I see, [in] many different designs and many different colors,” she says.

Originally said to be from Northern China, Hmông peoples migrated to the mountainous regions of Thailand, Laos, Cambodia, Burma, and Vietnam at the turn of the 19th century as a result of discrimination faced in China. When the Communist party took over these regions, the Hmông, who were supporters of the United States, were in danger of retribution. Many left their homes and settled in refugee camps in Thailand until other opportunities for resettlement came about. In these camps they became dependent on relief agencies for subsistence. To contribute to their income, many Hmông people began selling handicrafts to improve their standard of living. “When I came to this country,” Khang says, “I wanted to sell… I wanted to get money [so] I tried different things.” In reference to the amount of revenue she receives from her work, she says that it is “not a lot…but better than nothing!”

Before living in the camps, Hmông people only made handcrafted goods in their limited free time and for special occasions; life in the camps provided an opportunity to develop their craft. Although many of the traditional techniques were maintained, many were adapted for the Western market. Khang emphasizes this adaptation, stating that her craft changed a lot when she came to the United States because she began to make embroidery for the purpose of earning a living. Instead of solely producing flower cloths for skirts, Hmông started using the designs in products such as purses, quilts, and bed spreads. Pictorial embroideries called Paj Ntaub Tib Neeg began telling stories of the Hmông people. Khang has shared her beautiful textile work at Cultural Survival Bazaars for more than 20 years. She recalls, “First, I think I came to sell in Cambridge, and I really liked it. So I keep coming back!”Khang has continued to create and sell her work not only for income, but also as a means of participating in a practice dedicated to sustaining Hmông culture. When asked whether she would be at Cultural Survival’s upcoming bazaars, her response was a resounding “Yes! I’m going anywhere you go!”

The 2012 CS Bazaar series raised over $477,348 for Indigenous artisans and their communities. Find a Bazaar near you! Visit: bazaar.culturalsurvival.org.