The Tale of a Young South African Activist: Shanice Appels 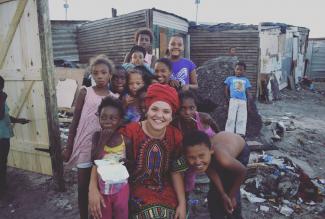 For thousands of years, Indigenous (Khoe) pastoralists have occupied Southern Africa. Some of the Khoe clans of South Africa include the Goringhaiqua, Corachouqua, Chainouqua, Cochoqua, Chariguriqua, Hessequa, Damaqua, and the Attaqua, among many others. In 1904, the government reclassified most people of slave heritage, along with many Indigenous Peoples, under the umbrella term “Coloured.” Since the dawn of democracy in South Africa in 1994, many people are now tracing their roots in an effort to reconnect with their Indigenous heritage. Having embraced Western religion and education for more than a century, there is currently a new sense of revivalism in many parts of South Africa.

A strong call for consciousness rings in the hearts of activists like Shanice Appels (Khoe) who is a member of Cultural Survival’s Indigenous Youth Advisory Council for the Indigenous Community Media Youth Fellowship. Now 20 years old, she has been an activist from an early age. “I grew up on the Cape Flats. At the age of five, my late mother always took me with her to the political rallies and community meetings and instilled into me that we have to take a stand,” she recalls. “Being from Mitchells Plain, it was very difficult to speak out because of being a so-called ‘Coloured.’ It’s like your voice is always ignored. Violence is the norm here and poverty is something that everybody is victim to. My journey started with basically seeing the need and knowing that I was able to change my whole community. That is a big job, but I just started speaking out on issues of rape, child abuse, and gangsterism.”

In 2014 at the age of 16, Appels founded the Princess Project, which operates in impoverished communities in Cape Town and strives to bring awareness about rape, to take down the stigmas about abuse, and empower young girls in becoming activists and leaders. “We were able to collect 20 kids in orphanages and we just went out and threw them a party for their birthdays. The project grew from that, but started as a birthday party that I do every year,” Appels says. “I have done workshops and worked in places like Valhalla Park, Manenburg, Heideveld, Macassar... and even the informal settlements. It was just me seeing the fact that so many political parties come in and make promises but nothing happens; me struggling myself and seeing the people around me, and just wanting to break the cycle of it. That is what the Princess Project aims to do, empower young girls from the Cape Flats. It is very difficult, being a rape survivor. When you are a victim of rape, you are more ashamed than anything else. Like if you come out and say your uncle or even your dad touched you, your mother will tell you straight away you are ougat, meaning that you are a young girl that wants to grow up before your time. We are programmed to not speak out and to keep everything in. That was something that I needed and wanted to change,” she says.

Appels’ goal is to instill pride in the girls. “We try to promote self-love, and we also speak about the effects of gangsterism on our young girls because when we speak about gangs— especially on the Cape Flats—only the young boys are considered. We forget about the girls that fall victim to the flashy lifestyle and would get into relationships with 40-year-old gangsters. And from there, these girls would fall pregnant; some of them are even killed. That was something we needed to speak about because it’s not spoken of.” Over the past few years, Appels has assisted in court cases of young girls and women who have been raped and murdered to ensure justice is served. The Princess Project also accompanies and supports the victims’ families: “We would go out and riot with the community. We would go to every court appearance, and we would fight until justice was served. The Princess Project aims to uplift and to unpack a lot of the issues that go on within the so-called ‘Coloured’ or brown communities,” which are the descendants of Indigenous and slave people in South Africa, especially Cape Town.

Under the Group Areas Act of Apartheid of the 1950s, which assigned racial groups to different residential and business sectors in urban areas, Indigenous land was taken by the government and distributed to white people. Appels has been fighting for justice in reclaiming this land, and additional Khoe ancestral territory, by working with the Surplus People Project in rural areas on land occupation cases and supporting farm workers in reclaiming their lands. The mission of the Surplus People Project, established in the 1980s as a national research project on forced removals under apartheid, is “to transform neoliberal capitalism, power, and patriarchy and for agrarian reform for food sovereignty.” Appels explains, “We go out in rural communities. Last year we were in HondeKlip Baai, Northern Cape, and sometimes we also go to urban areas like Malmesbury. We speak about the struggles of farmworkers, [particularly] women farmworkers. My mother was a farmworker, her mother was farmworker . . . so I come from that. We fight for social justice for these women. And we also are in the fight for these women farmworkers who are getting raped, abused, evicted without proper procedure, getting paid less than they deserve. We fight for the lands so that they can become farmers and not be stuck in being farmworkers.” 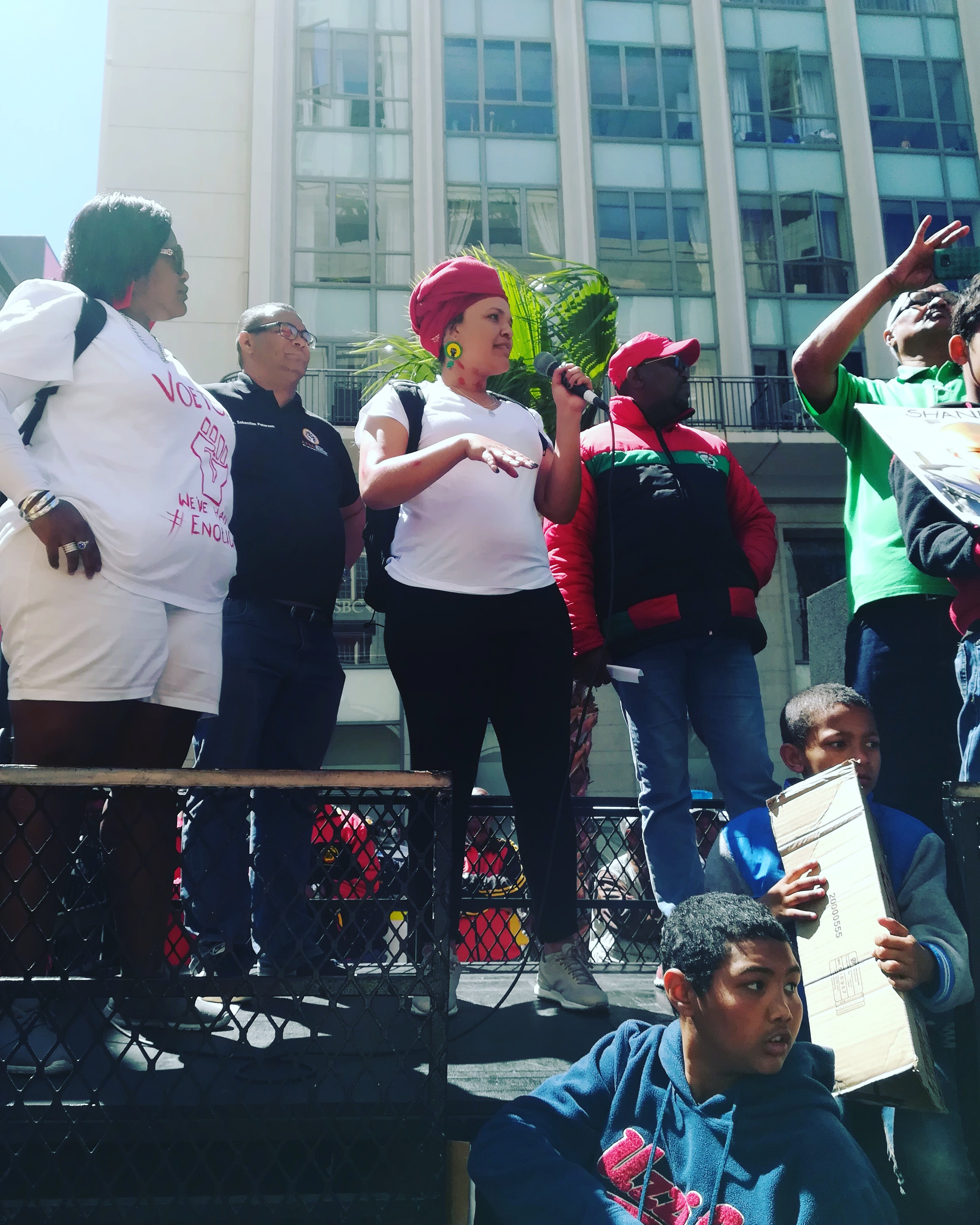 Photo: Shanice Appels outside National Parliament in Cape Town at a march
against gang violence on October 3, 2018.

Appels also participates in land occupations to secure land for farming purposes and housing. “We go into our own areas, like Mitchells Plain, and we occupy, riot, and some of us even would sleep outside for about 48 hours just to secure that land. It’s really difficult, especially being a brown person, to fight for land because you’re not recognized. Thus far we have had success for black and brown farmers, but not as much success with getting land for housing purposes,” she says. Appels also works with another organization, 9 Miles Project in Strandfontien, teaching children from coastal informal settlements and communities how to read, write, and surf. “The focus is women, but we do go out with young boys and we teach them how to conduct themselves by proper means so they don’t grow up to be men who assault women,” she explains.

Language is important to Appels. In the colonial years, most people of color were forced to speak Afrikaans, a Pidgeon language consisting mostly of Dutch but with many Indigenous words as well as vocabulary of slaves from places such as Malaysia, Madagascar, and Java. Very few people of color can speak a Khoe language today, but this is slowly changing due to the advocacy work of people like Appels. She advocates for the use of Indigenous languages in public schools to empower children and youth in honoring Khoe knowledge so that it lives forever. “When it comes to the languages, within my own project, I teach the kids Khoe. I myself have to acknowledge that I’m not fluent in Khoe. I get people to teach me and I do research on my Indigenous history to try to teach myself. I only knew about Saartjie “Sarah” Baartman growing up. [Baartman was a Khoikhoi woman who, due to her large buttocks, was exploited as a freakshow attraction in 19th-century Europe.] The adult version of me had to teach myself about my other ancestors and our rich Indigenous heritage.”

As an Indigenous person in South Africa, Appels says, “you think that people can see you, but they actually cannot. You have to push, make a sound, make a glass fall out of nowhere so that they can recognize that indeed there is ‘this person.’ That is what it’s like being an Indigenous person. They say that we are living in a democratic country, but I don’t really think that it is as equal as they paint it. If it was really that equal, I wouldn’t be a 20-year-old that only speaks English and Afrikaans. For 20 years, I have been robbed and raped by a government that truly does not care. [So], I have devoted my time to fighting for the Indigenous people of my country. I have joined the fight to reclaim our stolen land and to work towards the implementation of Indigenous languages in schools to empower children and have our Indigenous languages not only acknowledged, but to live forever.”

Photo: Shanice Appels at an informal settlement called "Overcome" after a wild fire left over 100 people and children homeless.