A Tale of One City, Two Languages: Palín, Guatemala 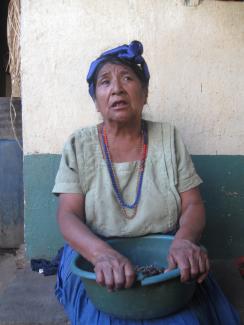 “We are not going to forget it. As our grandmothers and grandfathers said, “it is our life.” --Ana Concogua

Amidst beautiful mountains and volcanoes sits the town of Palín, Escuintla, land of the Poqomam people. It is located 40 kilometers from Guatemala’s capital, Guatemala City. Here, in Palín-Escuintla, the people speak the Mayan language of Poqomam. The close proximity to the capital and the Pacific coast has made the town a strategic center for commerce and industry; the city is a cosmopolitan center where Indigenous people, Guatemalan Ladinos, and Central Americans coexist together, comprising a population of about 60,000. In contrast with other Maya towns, where Indigenous people are often contained to the fringes, in Palín the Indigenous people are concentrated in the urban center and account for 50 percent of the population.

“Many years ago, we Indigenous people were the majority, not the Ladinos. There were few Ladinos,” says Ana Concogua, a native of Palín. “We were only taught to speak Poqomam, and when a Ladina addressed us in Spanish, our mother would say, ‘don’t bother talking to her, you won’t understand.’ This is why, today, we teach our daughters, sons, and grandchildren both Poqomam and Spanish, so that they can relate to and understand what the other culture says and does.”

Distortion and Loss of Language

To address the disappearance of Poqomam, the first linguistic seminar was held in the town of Palín in 1985. The seminar was a sort of cultural call to arms, where Moscut warned that “our generation could be the last to speak Poqomam; or we could be those who motivate its regeneration.” Since then, a group of farmers, students, and teachers worked together to create the Cultural Association of Poqomam Qawinaqel, along with an educational center of the same name, to allow for children’s education and care to be provided in the Mayan language.

The existence of these Centers has improved the self-esteem of many Poqomam people, inspiring them to fight for recognition of their rights and identities and to challenge the notion put forth by anthropologist Richard Adams in the 1950s: that Indigenous people in Guatemala were on an irreversible path to Latinization.

Radio as a Service to the Community

Radio has become a popular medium to make information widely accessible and to facilitate the strengthening of Indigenous identity. On July 30, 1997, Radio Qawinaqel was born after the signing of the Peace Accords established the Accord on Rights and Identity of Indigenous People, which gave Indigenous communities in Guatemala the right to community radio.

Since its inception, Radio Qaqinaqel has broadcasted bilingually in Spanish and Poqomam. Some people have liked this, though others have not, considering it a regression for people to listen to Poqomam music and language. But after 15 years of work, public opinion is beginning to change. “Now, many people call and congratulate us on the work we are doing. Some have even told us that they have learned Poqomam words by listening to the radio,” says station director Carlos Gomez.

Elías Choc, President of the Poqomam Linguistic Community of the Guatemalan Academy of Mayan Languages, explains that his institution has joined the effort to de-stigmatize Poqomam by developing texts for the teaching and learning of the Mayan language. It has also provided facilitators to public schools who help teach students to speak and write in Poqomam.

“We see positive changes, like various people coming into the office to learn to pronounce words or to request information,” Choc says. Because of it, the Academy has recorded a series of messages in Poqomam on topics such as correct word usage, the resurrection of terms that have fallen into disuse, and elements of identity that can be shared over public radio.

Upon seeing the impact of the resurgence of Poqomam language on the people of Palín, organizations and businesses have joined in to transmit their messages bilingually as well. Verónica Dávila, who leads the community health center’s efforts against malnutrition in young children, says that since they began broadcasting health campaigns in Poqomam and Spanish on Radio Qawinaqel, the number of patients visiting the health center has increased. And because three Indigenous women work there, Mayan speakers are more confident coming in for their exams.

Palín is not the only town where Poqomam is spoken, so part of the Poqomam Linguistic Community’s action plan for 2013 is to seek out media organizations in the towns of Mixco and Chinautla in the department of Guatemala to replicate what is being done in Palín. However, in order to ensure that Poqomam prevails for many more generations, responsibility ultimately rests with the parents. “The home is the first school where the Poqomam language should be taught to children,” says Choc.

All participants in this article agree that Radio Qawinaqel has contributed greatly to the revival and diffusion of Poqomam, but more work is needed. “We must continue to raise awareness of the richness of cultural differences, so as to construct unity among our diverse cultures. With the help of the radio, the language has become stronger,” says Moscut. “The next step is to resurrect the academic Poqomam spoken ancestrally by our elders.”

While the community understands the urgency of the situation, native speakers are confident that Poqomam will endure. Says Concagua, “I do not believe that the language will disappear. Each day, more babies are born. My granddaughter just had her baby and she must teach him Poqomam. We are not going to forget it. As our grandmothers and grandfathers said, it is our life.”