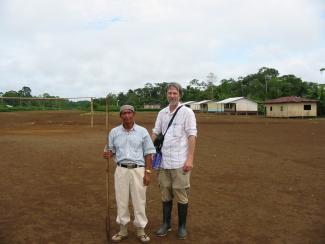 “Self-determination and sovereignty are the cornerstones on which companies should base their relations with Indigenous Peoples.”

Our series spotlighting the work of our Board members continues with Steven Heim, managing director and director of Environmental, Social, and Governance Research and Shareholder Engagement at Boston Common Asset Management, a Boston-based investment firm that manages approximately $2 billion in assets and is a leader in global sustainability initiatives.

Many may still remember the racist wooden Indian statue décor of the Applebee’s restaurant chain in the 1990s. One of Steven Heim’s first collaborations with Indigenous Peoples and his earliest impacts in socially responsible investing was helping to successfully pressure the restaurant chain to change its décor package. As he recalls, “There was a big controversy led by members of the American Indian Movement regarding the use of ‘cigar store Indians,’ or wooden Indians, as part of the décor of the Applebee’s restaurants. We wrote to Applebee’s and talked to them.”

With two degrees from the Massachusetts Institute of Technology, Heim has more than 20 years of socially responsible investing and advocacy experience, engaging over a dozen companies on issues related to Indigenous Peoples. Since the late 1990s, Heim has witnessed major shifts in how business is conducted; he believes that companies are looking into how they may be harming human rights, thanks to the adoption of the UN Declaration on the Rights of Indigenous Peoples, the UN Global Compact, and the UN Guiding Principles on Business and Human Rights.

Face to Face Engagement
Heim has spearheaded Boston Common Asset Management’s engagement efforts with ConocoPhillips, the world’s largest independent oil and gas exploration and production company. In 2006, ConocoPhillips purchased Burlington Resources, another US-based oil and gas company, whose primary operations were in the US and Canada but extended into Ecuador and Peru as well. Boston Common and the Church of the Brethren Benefit Trust, together with other investors and Amazon Watch, had been pushing Burlington Resources to respect the wishes of the Indigenous people there—who in Ecuador were opposed to oil development—and to adopt an Indigenous Peoples’ rights policy.

“With Amazon Watch, we helped arrange for Indigenous leaders to attend ConocoPhillips’ annual meeting in Houston in 2006, where one of the leaders was able to speak. The following year, a ConocoPhillips board member told me that the Indigenous leaders’ presentations had prompted the board to specifically ask management about ConocoPhillips’s operations in Ecuador. The company said that they did not have any more plans for Ecuador. They did, however, later say they had plans for Peru, so we continued to write to the company and organized a series of meetings with the company in Houston and New York. It took a long time, but in 2011 they adopted a global Indigenous Peoples rights policy recognizing the Declaration and ILO 169 and incorporated it into the company’s human rights policy. This built on their earlier public pledge for Peru, which was ‘to obtain complete understanding of and agreement with our activities from all communities in our areas of operations prior to conducting exploration and production work.’”

ConocoPhillips is just one of Heim’s many success stories, and his achievements are not limited to engagements with US companies. In 1999, Repsol, a Spanish oil company, merged with what some called one of the worst violators of Indigenous Peoples’ rights, YPF. “I initially helped write to Repsol in the early 2000s about Colombia and Ecuador and I met with the  company in Quito in 2005,” Heim says. “Following that, we wrote to the company with assistance from Amazon Watch and Intermón Oxfam (Oxfam of Spain). We were able to get Intermón Oxfam representatives into Repsol’s 2008 annual meeting in Madrid. Repsol told me two years later that our intervention encouraged the company to engage with Oxfam and other organizations that work with Indigenous Peoples rights.” Not only that, but Repsol eventually adopted an Indigenous Communities policy and became the first oil company operating in Latin America to have an Indigenous Peoples policy.

Shareholder Activism
The recent Indigenous Rights Risk Report by First Peoples Worldwide revealed that only one out of the fifty-two US mining and oil and gas companies analyzed had an explicit policy of abiding by Free, Prior and Informed Consent (FPIC) as mandated by the Declaration. Only four others had company- wide Indigenous Peoples policies, leaving the remaining forty-seven companies with no clear policy for productively engaging and working with Indigenous Peoples.

Heim stresses that such policies must be implemented, and that shareholders and the public can help keep companies accountable through letter writing, research, and public policy lobbying. He notes that the first step is contacting the management and asking them to adopt Indigenous Peoples’ policies. Investors can also file shareholder proposals to have a vote. Another way of being effective is to ask for a place at the table for Indigenous Peoples or communities in meetings with top management and to raise the issues with the companies.

Additionally, shareholders can say that they will not invest in companies that have bad policies or bad records. However, Heim points out, “if a company is not publicly owned, it is hard for us to influence them.” In that case, the leverage is through the lenders.

Since 2007, Heim has served as chair of the advocacy subcommittee for the US SIF Foundation’s Indigenous Peoples Working Group where he helps move the group’s corporate advocacy agenda, along with investor advocacy initiatives, such as challenging the racist and offensive team name of the NFL’s Washington R-dsk-ns. In addition to pushing companies to adopt environmental, social, and governance policies, Heim has talked with tribal government leaders about their advocacy and investment strategies; currently the Working Group is working with the National Congress of American Indians on implementing its resolution calling for socially responsible investing as its standard practice.

Respecting Indigenous Self-determination
Heim believes that the playing field for corporations is changing, thanks to awareness of Indigenous Peoples’ rights and universally agreed upon international standards like the Declaration. “Companies are realizing that they need community consent. The smarter companies are creating more partnerships rather than taking a transactional approach of simply receiving approval and moving on,” he says. However, some companies merely pay lip service to the notion of consulting Indigenous People when the actual process looks like a community relations presentation, as in, “this is what we are going to do, and now you have been consulted.” Heim recalls, “one Indigenous leader told me that some of the companies that his people have had to deal with have used FPIC in a very cynical fashion. He basically said, ‘If you talk you lose.’ That was actually my experience in Ecuador—Indigenous federations said ‘No, we are not going to talk to you, Burlington Resources. No means no.’

“But, the company kept pushing and kept trying to meet with individual communities in their territories to get letters signed by them. Companies in the past tended to say, ‘we’ll deal with the president,’ and what happens sometimes is basically bribery and corruption. It is critical for the whole community, the whole leadership to support a move or an action of what their future is going to be. Unfortunately there are still companies that try divide-and-conquer tactics with individual Indigenous communities or communities within regions where some will benefit and some won’t. I think the key thing is whether they accept the right of self-determination of Indigenous Peoples versus the transaction mentality that yes, they did do dialogue, and yes, they did have approval.

Also, Indigenous Peoples or communities need to be able to say no and not have the company continue to pressure them every few months to try to change their decisions.” Last year, Heim served as a member of the multi-stakeholder Expert Group for the UN Global Compact’s new business reference guide on the Declaration. He says that the guide will help companies to adopt good policies and practices and in so build positive, long-term relations with Indigenous Peoples: “The will of Indigenous Peoples is what should be abided by. Indigenous Peoples have the inherent right to decide what they want for their future: the Achuar in Ecuador said that they didn’t want oil development and instead wanted to develop their natural resources and utilize their forest for food, medicinal plants, or for tourism. The Saami of northern Scandinavia and Russia want to be able to continue with their traditional way of life, which is based on herding reindeer, even if they are using snowmobiles and GPS tracking. That is very modern, but at the same time it is protecting their traditional way of  life.”

Disclaimer : The information in this article should not be considered a recommendation to buy or sell any security. All investments involve risk, including the risk of losing principal.