Suffering for the Mistakes of Others: Climate Change and Indigenous Peoples 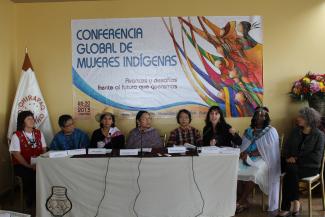 Extreme weather and climate change affect everyone around the world, but Indigenous Peoples are particularly vulnerable. Meenakshi Munda, member Asia Pacific Indigenous Youth Network, came to the World Conference of Indigenous Peoples from the state of Jharkhand in Central India, which is home to 32 Indigenous groups and where climate change has already dramatically affected her community. “The rains are falling too late,” she says. “This year our state was declared drought-afflicted for the third year in a row. The rains are shifting, and we are fully dependent on the rains for our rice harvests.” Along with diminishing the rice crops, climate change also threatens the drinking water supply.

Dramatic changes were also reported by Tomas Aslak Juuso, who attended the conference from the Sami area of Finland: “We are reindeer herders and we are seeing the reindeer change their migration patterns . . . this has changed our livelihoods.” He added, “we now have rain falling steadily for long periods in the middle of winter. In the past it would only rain once a winter, if that. This causes ice-snow, which the reindeer can find impossible to break through to reach the plants beneath, and also makes the ice on lakes and the surface of the ground unpredictable.”

Climate change is is also displacing Indigenous Peoples. Bouba Aeisatu from Cameroon described the plight faced by Forest Women: “The government sometimes dispossesses Forest People without any compensation,” she said. “Commercial deforestation simply cuts the trees down without preparing the Indigenous Peoples. We are forest people; we use the forest for medicine, for hunting and gathering, for fruits.”

The injustices arising from such forms of livelihood insecurity are increasingly clear. Victoria Tauli Corpuz (Tebtebba) told the conference delegates that States are increasingly seeing Indigenous territories as a solution to climate change through the construction of large-scale hydroelectric dams. “Indigenous Peoples, who did not contribute to this problem, are the most vulnerable to climate change because we live off the land in fragile ecosystems. Along the coasts, in the mountains, in the Arctic . . . climate change is a human rights issue and affects those who are the most marginalized and most vulnerable,” she said. Tauli Corpuz urged Indigenous people to influence global climate change mitigation negotiations so that a deal can be reached that embraces Indigenous rights, and which is founded on the principle that those who most caused the problem will pay the most to remedy it, while those who have been left most vulnerable will receive the most support.

Andrea Carmen of the International Indian Treaty Council described how Indigenous Peoples are already taking the initiative to adapt to climate change. In September 2012 the Indigenous Peoples’ Seeds Conference was held in Oaxaca, Mexico, reviving the ancestral knowledge of seeds that can thrive in the altered growing seasons. She explained that the restoration of traditional Tule reed beds can also play a part in carbon sequestration projects.

Peru will host the 20th conference of the parties to the United Nations Framework Convention on Climate Change (COP20) in 2014, which is expected to pave the way for a new binding deal on carbon emissions in 2015. Indigenous women activists are already working to raise awareness of the impacts of climate change, arguing that emissions must be cut far and fast. Indigenous rights must not be sacrificed through action against climate change, as Indigenous knowledge and lifestyles offer answers to a world that must learn to live within its means.

—Robin Llewellyn is a freelance journalist focusing on human rights and environmental issues.