The Struggle to Implement Maya Land Rights in Belize 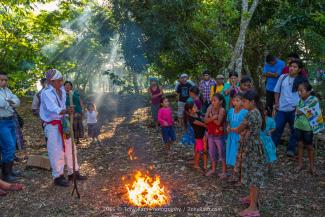 Belize is part of Maya ancestral territory and emerged as a modern nation-state in the colonial crucible where British and Spanish imperial forces targeted the Maya for expropriation and erasure. Entire communities and geographies across the Caribbean were reconfigured through the imposition of colonial maps, borders, and racial animus, which fractured Indigenous communities. Today, Belize is a multiethnic society and home to a diversity of Peoples, including three Mayan linguistic groups: the Qʼeqchiʼ, Mopan, and Yucatec. The Qʼeqchi’ and Mopan live primarily in Toledo District, which is the southernmost district of Belize and where 41 Maya communities reside.

Since contact, the Maya have been engaged in a prolonged fight to defend their territories, relations, and self-determined futures. Traditionally, the Maya have held lands in common and derive individual rights of use from the community through collective process. Central to this communal and complex land tenure system are the alcaldes, a critical element of customary Maya governance that existed prior to contact and has been reconfigured over the centuries. The alcaldes of Toledo District, which are internal to rural Qʼeqchi’ and Mopan villages across southern Belize, manage land use and boundary harmonization processes, and facilitate democracy, conflict resolution, and community cohesion. An economy of reciprocity lies at the heart of Maya social relations, practice of participatory governance, and connections to territory. Despite being targets of empire and state authority, the Maya have been able to maintain a certain degree of relative autonomy and retain their communal approaches to holding and stewarding land, which is categorically different than claiming individual ownership of private property. Amidst this resilience and struggle against the ongoing aftermath of colonialism, the alcaldes and their communal lands continue to face constant threats, mainly in the form of State-sponsored development or purported environmental conservation projects. 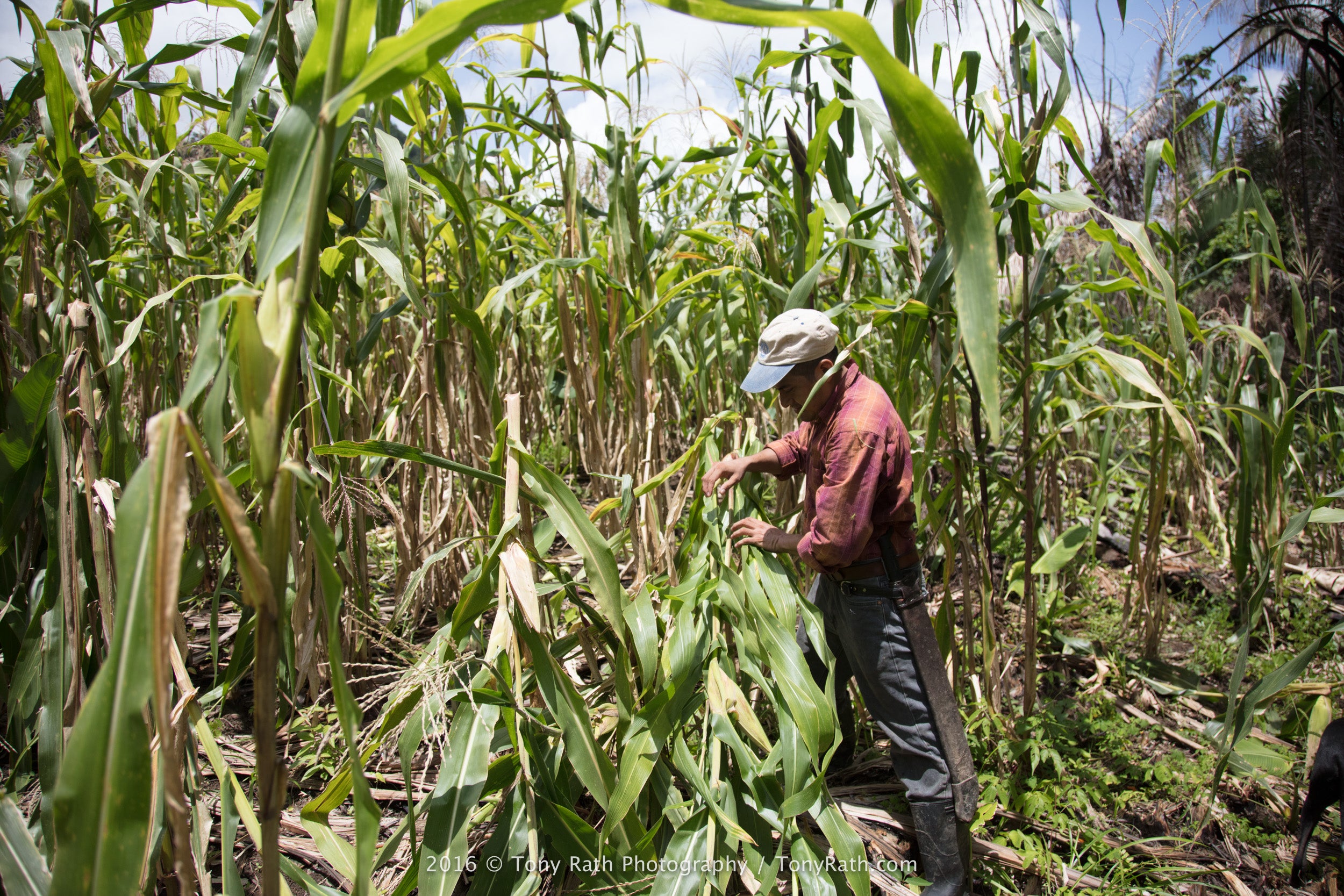 Harvesting corn in the milpa in Laguna.

The latest iteration of the Maya struggle started in the mid-1990s as a response to logging concessions for timber extraction on nearly half a million acres that were granted without consent by the Belizean state to third-party businesses. While Free, Prior and Informed Consent (FPIC) was affirmed as part of the 2007 United Nations Declaration on the Rights of Indigenous Peoples and obliges States and other third parties to consult in good faith and without coercion with Indigenous people to obtain their consent before adopting any measures or starting any development projects that may affect their communities, Maya farmers only learned of the concessions when they were confronted by loggers and heavy equipment in their backyards.

Over the last 20 years, Maya villagers and movement leaders have been forced into the courts at every level. The contentious conflict between the State and Maya culminated in a watershed decision issued by the Caribbean Court of Justice in 2015, which asserted Maya villages hold title to their traditional lands. The Court’s ruling––a first in the Caribbean regarding Indigenous land rights being acknowledged by an international court––decrees that traditional Maya notions of communal land ownership are equivalent to the Western concepts of private property and land ownership found in the Belizean constitution.

Around the same time that the Court rendered its ruling in favor of Maya communities, in June 2015, I was was arrested along with 12 other Maya land defenders from the village of Santa Cruz. Maya residents were protecting a heritage site, preventing unauthorized settlement on sacred grounds, and adjudicating the situation via customary governance. The alcaldes, who are officially recognized as lower court magistrates, intervened only after requesting and subsequently being denied assistance from the State. The government used the incident as a pretext to paint the Maya as a “violent mob,” stoke divisive Black-Indigenous relations, and arrest residents of Santa Cruz in the quiet of night.

The significance of the arrests was highlighted by then-UN Special Rapporteur on the Rights of Indigenous Peoples, Victoria Tauli-Corpuz, who, in an international statement, noted that the State’s behavior displayed “troubling disregard” for the Maya’s rights. She went on to stress that “the current situation of conflict and mistrust cannot be allowed to persist.” After approximately a year of legal appearances, court fees, and prevarication on the part of the government, the charges against the Maya activists were dropped in their entirety. Criminalization, vilification, and attempts to slander or disappear Indigenous activists and environmental defenders continue to be the preferred methods of suppression of numerous postcolonial governments across Latin America and the Caribbean.

The 2015 ruling also led to the formation of the Toledo Maya Land Rights Commission. The Commission is a government entity legally bound to see the court order through to its completion via working in good faith with the Maya communities, as well as the Maya Leaders Alliance and Toledo Alcaldes Association, each of which were appellants in the 2015 court case. The Toledo Alcaldes Association is a group of 78 selected leaders who represent the 39 Maya communities of Toledo District. The role of the Toledo Maya Land Rights Commission is to contribute to the implementation of the order. However, it has retained a disdainful if not antagonistic view of the Maya communities, and in particular, the Toledo Alcaldes Association—a critical element of customary Maya governance and main representative body of the Maya people in the region.

Ever since the Maya won rights to their land in 2015, the State has continued to violate FPIC protocols; encroach on Maya lands; denigrate Maya activists and land defenders; abscond from its duty to consult in good faith; and undermine the alcaldes. The combative and enduring denials of Maya land rights, customary governance, and violations of FPIC on the part of the Belizean government prompts two pressing questions regarding the State’s commitment to human rights and Indigenous Peoples: first, what is preventing the government from meaningfully recognizing Maya land rights and acting in good faith with respect to FPIC? And second, what motivates the State’s decision to habitually disregard the rights, governance system, alcaldes, and even humanity of Maya communities and land defenders? From the beginning of the most recent land rights struggle in the 1990s, Maya historical continuity and presence on their lands has either been overlooked or refuted by government officials. When Maya communities have appeared in court to assert their land rights, the State has called into question the legitimacy and acumen of the Maya, as well as insultingly trying to argue that the Maya of Toledo District are not Indigenous to Belize.

Despite both the 2015 ruling and the more obvious fact that the Maya communities fully understand the deep connections they have with their ancestral territories, they continue to have to fend off State-sanctioned land grabs and persistent attacks on their customary governance system. State officials routinely mobilize a discourse of nationalism to scapegoat the Maya as “irrational,” “antidevelopment,” and “greedy” actors. Derisive charges like these are a common strategy deployed by authoritarian states against Indigenous Peoples across the globe.

At the center of the Maya struggle is the ambition to transform Belize into a country more accepting and respectful of Indigenous modes of organizing and relationships with territory. Their struggle is not unlike that of the Zapatistas of southern Mexico, predominantly Maya themselves, who have expressed a desire to build “a world in which many worlds fit.” Similarly, for the Qʼeqchi’ and Mopan communities of Toledo District, the Maya are neither seeking to abolish nor secede from Belize, but rather to have their ways of being recognized so Maya Peoples can live peacefully in a place where their land rights and relations, customary governance system, and self-determination are equally respected and can be practiced freely without fear of State-sanctioned repression, reprisal, or retaliation. The fruition of such an inclusive and just future for Belize remains to be seen.

All photos by Tony Rath.