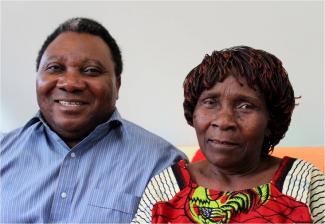 Still a Pygmy is the memoir of Isaac Bacirongo, an ethnic Mbuti (Pygmy) from eastern Democratic Republic of Congo, believed to be the first memoir by a Pygmy author ever published. Bacirongo helped establish the first Indigenous rights organization in D.R.C. in the mid-1990s. He was imprisoned because of his activism by the rebel regime that occupied the area from 1998 to 2003, but managed to escape to Nairobi with his wife and 10 children, later registering as a refugee with UNHCR and being resettled in Australia. Still a Pygmy brings to life the themes of Indigenous politics and community in Central Africa. The following are excerpts from the book.

Pages 53–55:
When I was about 10 my family moved out of the forest and Papa got a job on the farm of a Belgian man, Mr François. He used to give me lifts in his dark blue Peugeot 404 from his farm to his office, and then I walked the rest of the way to the local school. No other Pygmy ever stepped inside that car. He knew I was from the Pygmy camp and occasionally he gave me some money to buy something, but I would use it to pay my school fees. This amount was nothing to him, but sometimes it paid my fees for an entire term. During my rides with Mr François he asked me about school. “Who is your teacher? What did you study today?” He did not speak Swahili so we spoke in French. He asked simple questions because he knew I did not speak French very well, although I had started learning it in school. Over time these conversations improved my French a lot. I was proud of being able to talk to him and that I rode in his car. I asked him about his wife and children, and when they were going to visit the farm. They lived in Europe, so perhaps he missed them and showed kindness to me because of that.

From about this age I started to have a double life. Like other Pygmies on the farm, Papa worked when he wanted to, but he also went hunting back in the forest when he wanted to, and sometimes I would go with him. I was comfortable in the Pygmy camp and in the forest, but I also started to become familiar with Mr François’ life—with modern life: cars and electricity and French language and the tea factory. I was not living a modern life, but I could see it and it started to become normal for me and was no longer strange. Other Pygmies never went near Mr François’ house. When Mr François’ children visited and walked to the Pygmy camp where we lived, everyone hid in their huts or in the forest because they were afraid. But I was different. I wasn’t afraid. I had lost my fear of white men because of Mr François. I realised he was kind, and just a person like me.

Pages 128-131:
In the mid-1990s, after I’d become a successful businessman and while Congo’s dictator, President Mobutu, was still clinging to power, a man in Bukavu called Kapupu created a small non-profit organisation to help Pygmies. Kapupu publicly called himself King of the Pygmies, but he was not a Pygmy at all. He was from the Rega tribe. He asked members of his church to donate salt and second-hand clothing that he could distribute to Pygmies. The Pygmies were very upset about this, that this man was saying he was their king. Traditionally we don’t even have chiefs—or kings!

One day I was invited to visit the office of a man called Kabungulu who worked for Héritiers de la Justice, a local human rights organisation. Kabungulu had heard what Kapupu had been saying and told me “If Kapupu is saying he is your king, it is the fault of the Pygmies because you are hiding and do not come out and take the lead in saying he is an imposter. You have to raise your voice. You need to do something about it. I cannot approach the wealthier Pygmies living in Bukavu because they don’t want to be known as Pygmies. But I can talk to you.” Kabungulu knew there were Pygmies who were capable of being leaders and fighting for Pygmy rights, but that shame was keeping them back. Kabungulu told me to contact people in my community so we would all come together.

I was reluctant to get involved. When Kabungulu first contacted me I wondered what I was going to gain. It was dangerous to be an activist in Congo and Mobutu used to hang his critics in public, so setting up a human rights organisation during his reign was impossible. An environmental or business organisation might be possible, but not something for human rights.

Like other Pygmies I had also hidden my identity. The reluctance of Pygmies to show their identity goes back centuries. Whenever Pygmies have come out of the forest, they have tried to hide their identity to get acceptance. Every time someone has tried to make them equal it has only made things worse. Being a Pygmy activist seemed like a lonely job.

However, I listened to Kabungulu. By the mid-1990s, the power of Mobutu had weakened a lot. We were still a bit scared, but we could express our opinions freely, and felt encouraged. On Kabungulu’s advice I went to talk to three Pygmy elders living in Bukavu: Kangene, Muley and Nyabyamo. These three men are all related to me and to each other through clan ties. Kangene is like a grandfather or great uncle to me, Muley is his younger brother and Nyabyamo is a distant uncle on my mum’s side. At the time Kangene was in his late seventies, and he died only a few years ago in his nineties.

Kangene was proud to talk about Pygmies and he told me how from the 1950s he started a campaign to get the colonial authorities to pay attention to us. The Belgians became interested, but other Pygmies were not. As it turns out, the colonial administrator of that area wanted help from Kangene to convince Pygmies to put their children in school, which is why he became interested in us. Only a few Pygmies took up this offer, the rest ran away into the forest. The Belgians made Kangene a teacher because he had had a few years of primary school education, and in those days this was considered a lot. Kangene put his children in school and two of his sons became medical doctors.

Kangene told me that of all the Pygmies in Congo, the Bunyakiri Pygmies—where my community is from—are the most educated. It gives us pride that Kangene and a couple of others went to school when most Bantu did not and Pygmies elsewhere were living in the forest. It was these educated Pygmies who started the fight for our rights back in the 1950s. All three elders encouraged me to organise the Pygmy community and get the help from abroad. “Go ahead,” Kangene said. “We’ll support you.” I felt encouraged and went ahead and contacted their children because I wanted their support as well, and I wanted them to know that I had been talking to their fathers.

These extracts are reproduced with the permission of the publisher. Still a Pygmy by Isaac Bacirongo and Michael Nest (Finch Publishing: 2015 Sydney) is available in North America and Australia in print and e-editions and in the rest of the world as an ebook from Amazon, Kobo Books and the iBookstore. finch.com.au/books/still-a-pygmy