STEWARDS OF THE LAND IN PARADISE 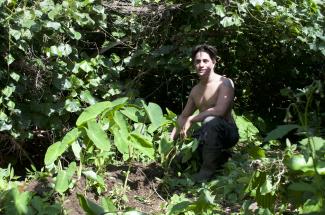 We would wake up before the sun, my father,  my mother, my brothers, and I. Sometimes we would go to the beach first, to gather shells and observe the fish. Later we would go to the taro patch as the sun was still coming up and feed our pigs, check the water areas, and start to tend the taro patches. If we were going to pull taro, we would all go together to harvest and prepare it. There is a special method of taking it out of the ground so that we wouldn’t damage the cuttings, or huli, which were to be planted after. There was always plenty to do on the farm, from weeding to clearing waterways, tilling the taro patches, and most of all, balancing the irrigation for the desired amount of water in each patch according to the growth stage of the taro. Those would be the everyday chores in our love relationship that we had with our farm and our land, which sits at the bottom of one of the most beautiful waterfalls in the world: Namolo-kama, the mountain in Hanalei.

There are many responsibilities in growing taro, but also there is an exchange of mana, or chi, because you love to do it. In our cosmology, the stillborn elder brother of man is haloa, the progenitor of our sacred staple crop, kalo (taro). An abundance of life-giving water is considered wealth, because with it, the taro is irrigated. As Konohiki, we have responsibility for land distribution and agricultural use in order that the land may be productive, the taro may grow, and the nation will survive. The traditional watershed management system is overseen by the headman of the ahupua‘a (watersheds), or Konohiki. I was instructed from birth to take responsibility for safeguarding the production and perpetuation of land and sea resources in the watershed and given the hereditary knowledge needed to fulfill that responsibility.

We are heirs to Royal Patent 4885 in Waioli, Hanalei, which is deeded from King Kamehameha V to the Konohiki, a family of overseers of the land. This is an allodial title,   inalienable in perpetuity, but we were evicted from our lo‘i, the farmland that we grew up in. We were the only Native Hawaiian family farming in that part of Hanalei Valley, and the Hanalei Poi Company owners at the time, Bino Fitzgerald and Hobi Beck, had our lease terminated. That separated a lot of our families; not just our immediate families, but everyone else whose routine and daily lives depended on this exchange and flow.

During that time in the early 2000s, they were hybridizing many varieties of taro and creating a market for them. The hybrids were not suitable for the growing conditions and not desirable for eating, but the crop yield was much higher, so it appealed to the corporate interests. We went through a couple of years trying to hold on to our lease and our land to occupy the place. Eventually they issued the eviction of our family from the land. My father and my brothers had all our equipment, all the time we put in, our love, blood, sweat, and tears that went into the place as we transformed the taro patches into working parts of our family. The farm was a family member to us, like a living person, and we were deeply connected with that land.

Later I began learning about our rights to the taro patch. Being Kanaka (Hawaiian) gives us a strong foundation not in the sand but in the dirt, and there was a powerful energy that came through to stand against these dark forces trying to separate us from our loved one. They later erected a gate that made it impossible to access the farm, especially with a truck. The patch went fallow and years went by while we still tried to hold down our place. Eventually they issued our land to other farmers and made it difficult to acquire it back. Our irrigation methods and systems are ancient and go back through our family for thousands of years. Now water is diverted in many places and sometimes the irrigation systems are not maintained. When the water level is low or dry, it damages the growth of the taro and the livelihood of the Native Hawaiian people and other farmers.

We want to sustain ourselves from the land, but we have been removed from it. We have become marginalized socially and economically as well as spiritually. It makes us kind of lost sometimes, and we feel out of place in our own backyard. Most of all it forces us to engage in lifestyles that are not traditional to us. Our abundance is stamped out by poverty and lack of income and employment for most of our people. Every day we pray and make offerings, and at certain times we do ceremony and the family comes and brings their offerings and gifts, or ho’okupu, to the land and to the ancestors. We also pray and send our collective consciousness to bring the energy to protect us as we go about our responsibilities as Native Hawaiian families and heirs to the area.

On April 4, 2017, we conducted a ceremony to stop bull-dozers and excavators sent by foreign interests to dismantle our taro patch in Wainiha, near Hanalei. That ceremony was a prayer that we be guided to do what is right and balanced as the people of the land. We were occupying the Wainiha taro patch, which is Royal Patent 6642, awarded to Kiwa‘a, one of our Konohikis. This is an allodial title, and we as Native Hawaiians have the right to tend to the taro patch. We have an interest in these taro lands, and in the taro patch, which is the center of our existence and the foundation of our culture, our spiritual beliefs and our religion, as well as our food source. As Native Hawaiian cultural practitioners, our responsibility is to protect areas like this, to protect our right to eat, to create food, and to live. These are basic rights for not just Hawaiians, but for all humans. We go to the taro patch to take care, to provide for others and share.

We were arrested as we were trying to make a fair claim to the land. It was a gruesome thing, as if we are criminals. We are not criminals; we are stewards of the land, we love the land. Four of us were arrested, as family members, friends, and spectators watched. I was arrested, a Konohiki and a   traditional religious cultural practitioner, practicing my culture, my traditions. The next day we had a meeting with the mayor, Bernard Carvalho, and the county attorney, who are both  Native Hawaiians and from this area as well. They didn’t want us to be prosecuted. So we continued farming and keeping up the place as we tried to file all our papers in the right places, to connect with everyone and find the chain of title, to understand the history of this parcel. It is important for the world to have pure food, water, and land, and so it is important to have justice for the Native Hawaiian families who are caretakers of such knowledge and skills. These customary practices must be respected so that everyone can be educated in such things.

Since last April, I have allied with a broad range of community members in an effort to allow Native Hawaiians to farm taro, build voyaging canoes, engage in customary practices, and live on the land. My interest in sustainable farming, low impact lifestyles, and caring for the land, as well as the urgent need for assistance to the Native Hawaiian community, has brought together others of like mind to form a 501(c)(3) Native Hawaiian organization, Konohiki Restoration Project. Already we are helping Hawaiian families defend their land titles, engaging in consultation with state and federal agencies to protect and preserve our historic and cultural resources, and preparing to open a cultural center and administrative space on five beautiful acres of land. We will grow taro there, host workshops and community gatherings, and conduct sacred ceremony. We have plans for a traditional thatched-roof house, and we will build a voyaging canoe. We would like to have a school of Celestial Navigation on some nearby ponds.

We also intend to create a land trust and a cooperative farmworker village of taro growers and their families, Ka Māla Village. At the same time that our organization is blossoming, the taro patch in Wainiha is threatened—and saving it is our highest priority. We are actively challenging the ejectment order in court, and we are raising awareness of the situation on the community affairs radio program we host on Kaua‘i Community Radio (KKCR.org), via social media, and through our network of volunteers and supporters. We are also raising funds to buy the land and take it off the real estate market forever.

—Ka‘imi Hermosura is a Konohiki of the District of Halele‘a on the island of Kaua‘i. He is chairman of the Board of Directors of Konohiki Restoration Project, a Native Hawaiian organization whose mission is to restore the health to the land and that which sustains; from the mountains to the ocean and from the heavens to the people, both Native Hawaiians and those others who care for the land. konohikirestorationproject.com.