Standing Shoulder to Shoulder with Indigenous Peoples on the Frontlines: Evelyn Arce 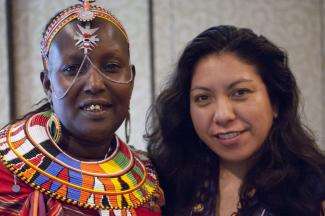 Our series spotlighting the work of our Board members continues with newly elected board member Evelyn Arce. Arce is of Chibcha descent (Colombian-American) and has been leading International Funders for Indigenous Peoples (IFIP) since 2002, spearheading efforts to educate the philanthropic community about critical Indigenous issues and increasing funding partnerships with Indigenous communities worldwide. She has a Master’s degree from Cornell with a concentration in Agriculture and Adult Education.

Arce has continued to bring diverse people and organizations together in re-envisioning the role of philanthropy in empowering local communities to make changes in a global world. Arce is passionate about her role in bringing a voice to marginalized peoples— people too often cast into the dark shadows of neo-colonial histories. “My grandmother and mother are both very strong forces in my life,” she says. “They were mestizas who lived in our ancestral village of Cucunubá, located in central Colombia, north of Bogota. My grandmother taught me the old ways by example. She would nurture sick birds back to health, do cleansing rituals with coconuts to ‘clear all the bad spirits,’ and work with medicinal plants. My grandmother was a single mom and my mother was a single mom, so they taught us how to be very independent and self-sufficient. “Both my mother and grandmother gave me my strong work ethic. My grandmother was a seamstress and worked long hours for very little pay. My mother came to the United States when she was 30 years old to escape the violence in Colombia and give her children a better life. She worked three jobs to support her seven children.

I am number six, so one of the youngest. Even though they both have passed on, every day I ask them for guidance and strength. “I have always known that Indigenous Peoples had wisdom and yet were not being truly heard. I understand how critical it is for each of us to leave this world better than we [entered] it for our children and their children’s children. I am passionate about IFIP because I see how effectively it works by leveraging what I like to call ‘Relationship Philanthropy.’”

Prior to becoming executive director of IFIP, Arce taught high school science and horticulture, participated in the Donella Meadows Fellowship Leadership Program, and was a communications consultant for the Iewirokwas Native American Midwifery Program. IFIP’s mission is clear: “To convene Indigenous Peoples, donors and foundations to advance partnerships that can improve the lives of Indigenous Peoples globally and address the challenges of our times.” Arce says the unique role of the affinity group of funders at IFIP is to bring Indigenous peoples and funders together to truly understand each other. “During our research for our publication, A Grantmakers Guide: Strengthening International Indigenous Philanthropy, we heard so many times that funders are reluctant to work with the unknown—and Indigenous communities in the most remote parts of the world can seem the most “unknowable.”

“Over the years,” she says, “we have learned that often it is simply enough to have funders and Indigenous leaders in the same room, speaking to each other. Of course there are cultural differences, particularly in how trust is established: Indigenous Peoples might call it ‘reciprocity;’ funders call it ‘accountability.’ So there is capacity building to be done on both sides, which is where IFIP comes in.”

IFIP is aligned with the idea espoused by the Intergovernmental Panel of Climate Change (IPCC), which advocates that Indigenous philanthropy is “the way forward.” Arce explains, “IPCC took a radical stance for a scientific community: they recognized the millennia of practice of Indigenous Peoples as empirical evidence of climate change observation and human adaptation. In terms of climate change science, Indigenous Peoples, who often live so symbiotically with the environment, have watched the climate change firsthand. They know how rapidly things are changing on the ground. Arctic peoples see the changes in migration patterns, in the loss of permafrost, in drastically shifting seasons. Amazonian peoples see the disappearance of species in a matter of years.” She continues, “Climate change directly affects the way Indigenous Peoples live; it affects whether or not they can eat; it affects their daily survival. In the industrialized world of air conditioners and frozen food, climate change is still more of a concept—one that is, apparently, still up for debate. Since we are an organization that serves as a bridge between the Indigenous and philanthropic communities, IFIP is a repository of all the stories of climate change and the work to prevent, mitigate, and adapt to it. We stand in an ideal position to give the world the best practices on how to support the peoples who are experts at surviving. Extinction looms clearly ahead for many traditional peoples; whether we in the industrialized world choose to see it on our horizon, it is a possibility for all of humanity. For IFIP, one of our most important roles is to bring Indigenous leaders into the rooms where climate change policy is actually decided.”

Arce recognizes that IFIP walks a fine line as an intermediary between prospective donors new to Indigenous issues and explicit advocacy for specific community-based projects. However, she says, “It is not our role to serve as judge and jury of Indigenous communities, to decide who should be recommended and who should be left to fend for themselves. From our members, we have culled the experience and best practices of how to start working with Indigenous communities.

“In A Grantmakers Guide, we compiled case histories of those donor pioneers who are forging what we consider to be a new paradigm of giving based on the ‘4 R’s:’ Respect, Responsibility, Reciprocity and Relationship. For many donors, this would imply a drastic cultural change in the way they do business. We want to encourage that cultural change, and we do that on every level, from international conferences to webinars with other funder groups, to publications, to regional meetings with funders to seminars at funder events.”

It is important to acknowledge the processes involved in facilitating partnerships between donors and Indigenous communities within the context of the larger struggle for recognition under the United Nations Declaration of the Rights of Indigenous Peoples. The Declaration creates a dialectic between Indigenous Peoples’ assertion of their rights to self-governance and the nation-state’s powerful hold on legitimating such claims. Arce believes that “like all international mechanisms, [the Declaration] isn’t perfect. But when you think about the struggle just to bring it into existence and how it will fortify legal battles in countries around the globe, you can appreciate its position on a long continuum of Indigenous struggle for self-determination and autonomy.”

As to her thoughts on becoming one of Cultural Survival’s newest board members, Arce says, “I am so happy to be joining the Cultural Survival community. I don’t take my membership in this community lightly—I want to share to the fullest extent my experience and passion. And I look forward to what this community can share with me. If there is anything I have learned, there is nothing more powerful than solidarity. My hope is that working together, we can build on the momentum that Indigenous Peoples themselves have created, to stand shoulder to shoulder with those on the frontlines of the most important struggles of our time.

To learn more about IFIP, go to www.internationalfunders.org.