Standing Up for Self-Determination In Autonomous Regions of China: Tibetans and Uyghurs 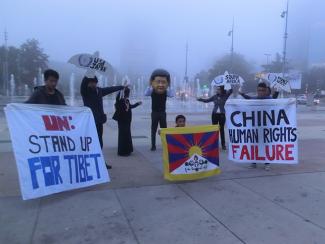 The creation of the Universal Periodic Review by the new UN Human Rights Council was an innovative approach to assessing the human rights record of each member state. Following the first review cycle, civilians—namely the core group of NGOs based in Geneva and grassroots human rights defenders—initiated advocacy campaigns to improve the review process for the people most impacted. Now, midway through the second review cycle, these modest procedural improvements are providing opportunities for Indigenous Peoples and other stakeholders to shape the review of states. One of the best examples of these changes on display is the case of China, specifically the ability of Indigenous Peoples and ethnic minorities there to  mobilize for their fundamental freedoms in Geneva.

The initial order of state review was selected randomly to ensure fairness, and the same order was maintained for the second cycle. The first cycle consisted of three, two-week sessions per year between 2008–2011. At each session, 16 countries were reviewed for 3 hours each, totaling 48 states per year. The second cycle is to consist of 14 sessions, to be held between 2012–2016 in the same format of three, two week sessions per year. China was first reviewed on February 9, 2009, and for the second time on October 22, 2013. In the first review, Indigenous Peoples and other stakeholders identified major human rights violations in communities inside China. However, a common practice for powerful states was to coordinate with allied member states to present on their behalf first, in order to generate a positive review with peer praise. In the first review of China, 60 delegations made statements of 2 minutes each, but 55 additional delegations were not able to take the floor. To prevent this from recurring, the second review was reformed so that all states desiring to speak could sign up the week before in the secretariat of the Office of the High Commissioner for Human Rights.

For the second review, the first state to speak is chosen randomly so that colluding allies cannot dominate all of the speaking slots. Since more delegations desired to participate, an additional 30 minutes have been allotted to each review session to provide more opportunity for the states under review to share their developments. As a result of these reforms, the second review of China heard 137 delegations; twice as many states took the floor, but for only 51 seconds each so that every member state could participate. The advocacy campaigns serve as catalysts for the statements by states, while NGOs provide five-page reports along with summaries closer to the time of the actual review with specific questions and recommendations for generating genuine change on the ground for Indigenous Peoples. In the first cycle, China received nearly 138 recommendations; in the second cycle, 270.

The advocacy by Tibetans and Uyghurs in the second review deserves special attention, particularly since it is impossible to coordinate inside China. At the 24th session of the UN Human Rights Council the month prior, the youth of Tibet in Europe formed a coalition to meet with delegates in the Serpentine Lounge throughout the session to discuss the current situation. The Uyghurs also organized informally, and presented at a side event as well. Rebiya Kadeer, a prominent Uyghur businesswoman and political activist from the northwest region of Xinjiang, an autonomous region of China, spoke on an education panel outlining how implementation of the UN Declaration on Human Rights Education and Training could enhance the Uyghurs’ quest for equality in East Turkestan. Because China was reviewed on the Tuesday of the first week of the session, only a single day of side events was possible. One such event focused on human rights defenders in China; another featured government-organized NGOs and focused mainly on development partnerships.

The Tibetan and Uyghur causes balanced diplomacy with direct action to alert the world to the human rights situations in their respective homelands. Prior to the opening of China’s review, Tibet brought China into the world court of public opinion with a peaceful protest. On a foggy morning before dawn, protesters unfurled a banner from the roof of the UN Palace of Nations, waving it high above the flag poles of the member states. The banner read, “China Fails Human Rights, UN: Stand Up for Tibet.” The youth organized to begin speaking to world media as monks and members of parliament shared the truth about Tibet with the banner in the background.

Then, street theatre: a giant papier mâché head of China President Xi Jinping was pointed at by UN member states, as China’s human rights record continued to hold the attention of the media. In the first review cycle, recommendations in support of China’s policies were made by Russian delegates, who called for economic and social development in the Tibet  Autonomous Region, and by Sri Lankan delegates, who recommended that China make its experience as a strong state with ethnic regional autonomy more widely available to the world. At the time, only four states challenged China’s policies regarding Indigenous Peoples: New Zealand called for resuming the dialogue on Tibet; the United Kingdom asked for greater access to Tibet for human rights and UN bodies as well as diplomats and media; and Switzerland and the Czech Republic requested respect for fundamental rights, especially freedom of religion and movement, as well as protection of culture and language for Tibetans and Uyghurs.

In the second review, there were 14 mentions of Tibetans and Uyghurs. While Pakistan and Saudi Arabia followed Russia and Sri Lanka’s practice from the first round of supporting China’s current policies, a dozen additional delegates cited concerns of human rights violations of Tibetans and Uyghurs. Four states (Germany, Iceland, New Zealand, and Poland) raised concern singly for Tibet, while just one (Tajikistan) mentioned singly the Uyghurs. Seven states raised the issue of human rights for Tibetans and Uyghurs: Canada, the Czech Republic, France, Japan, Switzerland, the United Kingdom, and the United States all posed questions and provided recommendations regarding the human rights of both peoples.

Others, such as Austria, reiterated the right to preserve cultural identity and freedom of religion without specifically mentioning the Tibet and Uyghur causes. Through this process, it was also recommended that Navi Pillay, the UN High Commissioner for Human Rights, visit the autonomous regions in China to witness firsthand the claims of the human rights campaigners.

Meanwhile, the Tibetan and Uyghur campaigns held a rally at the Place des Nations, marching to the Palais Wilson of the Office of the High Commissioner, and a representative delegation of the coalition of Indigenous Peoples hosted a global press conference online. Iona Liddle of the Tibet Justice Center explained the primary purpose of the Universal Periodic Review: “Peoples whose rights are being systematically violated must be at the core of the [review],” she said.

Julie de Rivero of Human Rights Watch noted of the second review, “There [were] a broader number of states really raising key human rights concerns in China—especially freedom of expression, especially regarding human rights defenders. It was impressive how many states raised concerns and questions. However hard China tries to cover up, it is impossible in our interdependent world.”

—Joshua Cooper is a professor at the University of Hawai’i, West Oahu, Kapolei, HI and director of the Hawai’i Institute for Human Rights.