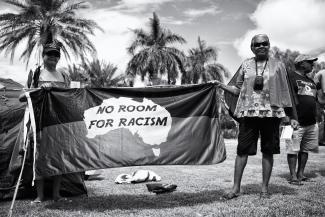 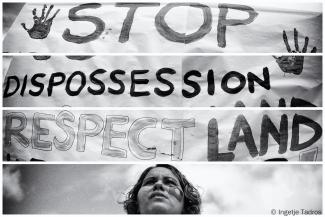 In the early hours of “Black Friday,” March 13, 2015, growing frustrations in the Aboriginal community had reached a pressure point. After the repeated failure of successive governments to honor Australia’s First Nations at the most basic levels, the perfect storm was brewing. Compounding this, the global lurch to the right under the guise of “austerity” had seemingly become a code-switch of government to normalize racism, bigotry, oppression, and genocide.

Since the appointment of Tony Abbott as Australia’s 28th prime minister in 2013, a cauldron of dissent has manifested across Australia. Labeled “One-Term Tony,” he has become world renowned for an ever-growing list of contentious and inappropriate comments. His unabashed concessions for min- ing alongside corporate interests are rampant, all the while sidestepping the clarification of his citizenship, which would determine whether he is indeed legal to hold office in the first place. The self-appointed Minister for Women’s Interests and self-declared Prime Minister for Indigenous Affairs’ latest blunder was a denigrating remark toward Aboriginal people living on their traditional lands, which he referred to as a “lifestyle choice.” The remark was made on a surprise visit to a mining stronghold in Kalgoorlie, Western Australia, on the traditional lands of the Maduwangka people, now forever scarred by the “Super-pit:” a viciously gorged open-cut gold mine approximately 3.6 km long, 1.6 km wide, and 512 meters deep. Such flippant disregard toward Aboriginal culture was the tinder needed to polarize a nation.

Abbott’s comment was in support of a position declared by the Western Australian State Premier Colin Barnett, who on November 12, 2014, announced that he would close up to 150 remote Aboriginal communities, saying the state could no longer afford to pay for essential services like electricity.

The premier’s comments were in response to the federal government’s decision to stop subsidizing these services in the middle of 2015, putting the financial responsibility on individual state governments. In direct response to this, the website www.sosblakaustralia.com was established and launched via social media, calling for Aboriginal communities to register their needs and for individuals to offer skills that could aid the community.

On the late evening of Thursday, March 12, a conversation thread on Facebook began among Darangah Nagarra Torres, Janine Dureau, Annette Kogolo, and Nelson Kurni Bieundurry with the view to holding a rally the following week, March 19, to coincide with Australia’s Closing the Gap Day—a govern- ment initiative claiming to deliver sound service and results for Aboriginal participation into the broader Australian social fabric. Over the course of the evening the thread gained momentum, as Ngigjingah Maryanne Skeen, Janella Isaac, Kelly Kitching, Jodie Bell, Kankawa Nagarra Knight, Lyn Shaw, Layangali Bieundurry, Lillian Chestnut, Jamie Davidson, Darren Mitchelson, Tjapanangka Paylrntarri, Nawoola Miri- woong, Ebony Hill, Venessa Poelina, Anne Poelina, Johannah Kitching, Danny Teece Johnson, and myself had joined the discussion. By 2:00 a.m. on Friday, the Facebook page “Stop the Forced Closure of Aboriginal Communities” was created. It was hoped that by the morning there would be close to 1,000 “likes.” A mere 7 hours later, over 2,000 people had “liked” the page. It spoke loudly to those involved, affirming that Australians from all over the country were fed up with our government.

The exponential growth continued; 5 days later every state and territory had mobilized, with 30 known community rallies of up to 30,000 people marching in the streets from the most remote Aboriginal communities, small regional towns, major cities, and the capitals of Australia. A virtual protest raged online, with international celebrity endorsements coming from Bianca Jagger, Hugh Jackman, Russell Crowe, Talib Kweli, Michael Franti, and Spearhead, among others. Our Aboriginal Australian and Australian artists and athletes stood solid in their support with major statements made at their various events and public platforms. The artistic response started to take shape with artwork, songs, poems, writings, and street art campaigns underpinning a cultural revolution. Importantly, there has been a reconnection with the Aboriginal rights movement and key activists in the United States (including the American Indian Movement), Canada, and Aotearoa New Zealand, with a powerful outpouring of sup- port from all levels of Māori Iwi (people) who are strong in their public stance. This is of historical significance, as there are over 70 years of deep links forged between our civil rights and black rights movements. In the 21st century this is now being redefined, re-awakened, and garnering further strength.

In 30 days, “SOS BLAK AUSTRALIA, Stop the Forced Closures of Aboriginal Communities” created a social media platform with a reach almost the size of Perth, the fourth capital city in Australia. Subsequent local community actions have continued across the country in smaller regional and remote centers alongside individuals who contribute daily their personal messages in the virtual protest. On April 10, the cities of Melbourne and Sydney shut down to hold rallies, sit-ins, and cultural celebrations, showing how strong the Aboriginal continuum is in contemporary times. The following day, April 11, the mainstream Herald Sun, which has largely ignored the efforts, ran a headline concerning the actions in Melbourne, “Selfish Rabble Shut City.” Rather than be agitated by this, the community fought back online, initiating #SelfishRabble on Twitter. In less than one hour, it had trended to number one on the Australian Twitter feed, beating the Australian Football League, National Rugby League, and Coachella.

The second Global Call to Action took place May 1, 2015. The event has made important and historical links to the union movements across Australia, which have come out in support and publicly stated they will defend the rights of Aboriginal people. As of this writing, there were approximately 98 known actions planned across Australia and internationally. Actions involved remote Aboriginal Communities alongside towns and major cities in all States and Territories, as well as Canada, the US, the UK, Germany, France, Brazil, the Philip- pines, and Aotearoa New Zealand. This has defied the combined imagination of the Aboriginal community roots who had come together just over a month prior. It is clear that there is a bigger responsibility to maintain and grow unity, being mindful that the obligation to our future leaders and elders is paramount to our peaceful actions.

At the back end, the plan goes far beyond calls to action. What has been at the heart of SOSBLAKAUSTRALIA is a humanitarian effort we are aiming to drive alongside the communities. It is our plan to make all of our communities sustainable through alternative power, water, and waste solutions, as well as to repair years of neglected infrastructure. This is in line with our sovereignty, and we have individuals in the community already looking into the potential to file a class action on behalf of our Aboriginal Nations against the state and federal governments. Our communities have issued a vote of no confidence in both state and federal governments, and we are all aware that this is an epoch of upheaval as the ongoing attack by the incumbent government has resulted

in the defunding of significant organizations that are the life- blood for our people. Yet we remain firm in our resolve and strong in our commitment to continue for as long as it takes to shift this supremacy regime off the backs of our people. We will stand against the great land grab for our mineral-rich country that underlies the government’s attempts to remove Aboriginal people from our traditional homelands. We shall overcome.

—Sam Cook is a Blaktivist of the Nyikina Nation from the Kimberley Region of Western Australia.

All photos by Ingetje Tadros
Images: Protestors in Broome, Western Australia, demand their rights. Up to 274 remote communities in Western Australia could have their municipal and essential services cut.