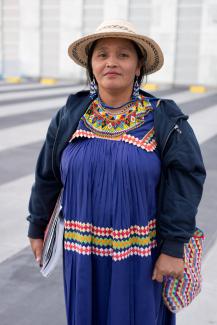 "Two years ago we experienced repression by the Panamanian government in which our lands and natural resources from our Mother Earth were attacked and exploited and thousands of people were killed. Indigenous Peoples have to fight to attain important leadership positions to defend ourselves and manage our own interests, our own laws that protect us all as Indigenous Peoples. Leaders need to not only think in terms of our personal interests, but rather at the national and international level, because we are being exploited by big transnational corporations like the mining and hydroelectric companies and illegal sales that happen under laws made by Congressmen.

Right now, we are trying to carry our voices to where they haven’t gotten before. Our people live in the mountains, forgotten, in a difficult place. But we’ve raised awareness, we’ve had workshops with other Indigenous Peoples who have visited us and have given us strength, and we will continue doing that to empower and self-govern ourselves. I’ve taken on a lot as a woman because in our country there has been a lot of machismo, and women have not been able to access important leadership positions. This is the first time, with me as the General Cacique, that we have a woman leader in Panama, and we’ve achieved a lot because I always respond to what the majority wants. I am going to get many of these programs and development for my people through consultations so we don’t make mistakes.

My message would be, above all, to the compañeros, the women leaders and authorities, the leaders from different countries, that we keep moving forward. Women are facing many difficult challenges but I believe we can progress. We must serve as examples in our communities, as women and as women leaders, for our future generations."