The Separation of Families Has Consequences: William Lopez 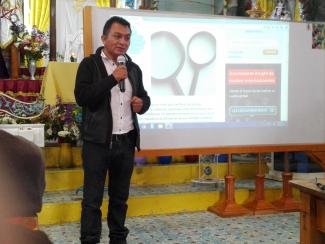 We are located in the northwest of Guatemala, about three hours from the Mexican border. We are known for the cultivation of garlic, onion, corn, and beans. Our language has been drastically impacted by invasion, immigration, and migration; now there are people who no longer speak Aguacateco. Many go to other countries and return with another accent. The media have also greatly affected the language of our children.

I have been very interested in creating a link between our communities and the people who have migrated to other countries. The United States and Canada have the largest presence of Aguacatecos; of Aguatec migrants living in the United States, almost half have their legal resident status, and the other half are undocumented. Pending their legal status in the U.S., many feel this need to connect to their hometown, to their community. This is the task that I have been given, to connect these families through streaming media, video, and audio, to generate information that transcends borders.

Since the internal armed conflict in the 1980s, the first Aguatecos fled from Aguacatan to Mexico, then to the U.S. Everyone went to the farms, banana plantations on the south coast, and others to coffee plantations. My grandparents lived through all these temporary migration movements. They went to earn wages and returned. In terms of permanent migration, many people have gone forever, they already have families in the U.S. This has changed the panorama here in Aguacatan. The high cost of living in Guatemala has also forced people to migrate, usually illegally, to the U.S.

Every day there are fewer Aguacatecos here in Aguacatan. It used to be men who migrated a lot. Now women and children are the ones who are taking the risky journey north. Aguacatan is one of the cultures that 50 percent of the population lives in the United States. The majority have one, two, up to three relatives in the U.S.

The separation of families has consequences. In order for our society to function properly, the figure of father and mother are indispensable. In our Maya lifeways, grandparents or parents were always in pairs to raise their children. Now it is totally different. Sometimes only the mother is with the children. Sometimes the children stay with the grandparents, but it is not the same relationship with the grandparents as the parents of the family. This has brought us problems in society: conflicts between young people, drug addiction, alcoholism. It is difficult to think about the future of our children, as currently a university degree is not enough to survive in this country. It is not easy to find a job even with a master’s degree.

I have visited some agricultural communities in the dry corridor of Aguacatan, towns and other parts of the country. The main crop they harvest is tomato, but they have been compromised in recent years. The rain does not come in season as before and they have had to bring in water. That made the costs of producing increase. It is practically no longer profitable to sow in these conditions. This has forced people to migrate because climate change has really changed the climate and the water cycles.

My grandfather recently said to me, “I am worried about the corn situation because it is not growing anymore.” Because of the invasion of the transgenic seeds, all this has come to change the original crops. That forces us to migrate. It is climate change. People who planted before now do not sow as they traditionally did. They are forced out of these communities. They look toward the coasts of Guatemala or risk going to the U.S.

As Indigenous Peoples, our constitution, the law of our country, guarantees us nothing. A very clear example is in the media; we have limited access to Guatemalan radio frequencies. It is a violation of our Indigenous rights. That has also limited us: little access to information. Many times we do not inform ourselves of what is happening, or we are simply manipulated by a monopoly communication system. We need to depend on ourselves to avoid migration, and to avoid the damage done to our cultures and our families.