Saving the Heart of our Cultures 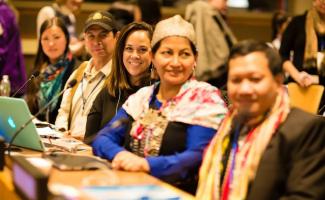 Experts and supporters from around the globe were called to a special meeting at the United Nations in January 2016 to address the deep crisis faced by Indigenous language communities all around the world. The statistical measures of the language crisis are staggering. Scholarly calculations project 90 percent of the globe’s almost 6,800 languages are on a course to fall silent during the lifetime of the children that are now being born into the world. UNESCO has estimated that, on average, a language is being lost every two weeks. With approximately three-quarters of all the world’s languages carried by Indigenous Peoples, the projected statistical impact on Indigenous communities is enormous. But the human costs of language loss are immeasurable.

The most intense drama of the UN meeting centered around the discussion of boarding school systems. These schools were the principal mechanism for destroying the continuity of Indigenous languages in many parts of the world— especially those areas that had an informal policy of settlergenocide, which was prominent across vast expanses of Indigenous lands later to become known as the United States, Canada, Australia, and Russia.

Chief Willie Littlechild delivered a moving presentation on the court-ordered work of the Truth and Reconciliation Commission to bring healing after the abuses perpetrated through the residential schools in Canada. He reported on the compiled record of extreme abuse and the extensive testimony of almost 7,000 survivors through the Truth and Reconciliation process. Chief Littlechild shared his own experience in the dehumanizing system, recalling that rather than addressing him by his name, the institution-keepers used a number to identify him: “If a pencil fell on the floor, they would tell me, ‘number 65, pick that up, you stupid.’”

As Chief Littlechild’s presentation came to a close, there was not a dry eye among the gathered listeners. Then, in a quiet but profound response, Chief Littlechild was affirmed by the Mapuche Elder and language expert from the Latin American region, Elisa Loncon Antileo. After hearing of this difficult and beautiful work to bring healing to the children and of the residential schools, she said she had come to understand why he carried the name, “Littlechild.” She told him, “You were meant to do this healing work on behalf of the children.”

During the proceedings of the Expert Meeting, the primary tension centered around the promise and peril of digital and other technologies for Indigenous communities who are desperately working to keep their original tongues alive. On one side was a great deal of positive energy identifying the technical and practical advantages offered through recent developments in digital capacities for recording, replicating, storing, and transmitting language data. Attendees heard from representatives of tech corporations on the many benefits of newer applications for transmitting language information across diverse communication platforms that have been adapted to Indigenous languages.

A number of language practitioners working with scattered communities also reported their positive experiences in adapting digital technologies to the needs of their work toward language revitalization. There were numerous examples of striking video projects and digital programs for transmission of recordings of elders. There was also a strong expression of goodwill on the part of academic and corporate participants with implied prospects of financial benefits for this type of approach.

On the other side were voices reflecting perspectives from traditional communities who hold instinctive reservations against the overreliance on technological solutions to the human problem of language loss. These voices were arguably underrepresented in the formal conversation, as such perspectives are more often carried by lower profile, grassroots language activists.

Advocates for this side of the debate pointed to deeply held beliefs about the living nature of Indigenous languages as relational, powerful, and sacred. If these beliefs are fully embraced, it means that sacred language is not something that can be appropriately passed forward by non-human methodologies. Traditional Shawnees in Oklahoma, for example, do not allow the electronic recording of their language—even for purposes of learning by community members—relying instead on breath-to-breath human exchange across the generations.

The other broad consideration raised by those questioning the shiny allure of technology concerns the practical metrics of producing new fluent speakers. Research has failed to show success on this bottomline measure for the various digital teaching tools. Chief Edward John, a sitting member of the Permanent Forum on Indigenous Issues, issued the sobering report that after 17 years of hard work on developing literacy for 34 Indigenous languages in British Columbia using comparatively low-tech applications, the literacy campaign had failed to produce even one new fluent speaker of an Indigenous language.

There is the further question as to how technological applications could possibly be effective for developing true cultural competence among those seeking to learn Indigenous languages. According to this view, learning an Indigenous language must remain a quintessentially human exchange, with technology playing only a secondary support role. Those questioning the benefits of technological solutions were restrained in their critique so as not to scare away prospective donor support from organizations with large institutional resources.

One of the contentious proposals was to develop an international fund for supporting Indigenous language work. Of course, questions of funding and awareness are closely connected; with so little awareness of the crisis for Indigenous languages, there is limited prospect for developing needed funding to address the language issue. As a side proposal, I suggested that participants act as co-signers on a full-page advertisement in the New York Times proclaiming the reality of the global language crisis. The headline would be to the effect of: “The libraries of Alexandria are now burning all around the globe.” This would be followed by a concise statement clarifying that: “Enormous storehouses of human knowledge, developed and refined over millennia in specific landscapes by Indigenous Peoples, are carried only by the world’s Indigenous languages. UNESCO estimates that on average one of these languages is lost every two weeks. We know effective methodologies for saving these irreplaceable Indigenous languages but lack necessary funding for implementation of life-saving strategies for our precious languages.” This would be followed by the names of those agreeing to add their names to the statement from the Expert Meeting on Indigenous Languages.

Such a publishing project demonstrates the bleak landscape for funding Indigenous language work and clearly shows the high level of desperation, as time is running out for resuscitating so many Indigenous languages around the world. It has been over 10 years since the first chairperson of the UN Permanent Forum on Indigenous Issues, Saami linguist, Ole Henrik Magga, projected that half of the world’s languages would be lost in 20 years unless changes were made.

So far we have not been able to identify backers to run the full page ad, much less to secure the level of funding needed to address the global language crisis itself. Still, this meeting provided a promising further step as Indigenous Peoples continue the work with the support of partners who understand the value of continuing to hear the beating heart of our cultures through our Indigenous languages.

—Richard A. Grounds Ph.D. (Yuchi and Seminole) is executive director of the Yuchi Language Project, working with the four remaining fluent Elders to develop new young speakers of Yuchi through immersion methodologies. He has published on Native language issues and served as the North American expert for the recent UN meeting and as consultant for the Smithsonian’s “Recovering Voices” initiative. Dr. Grounds recently received the Oklahoma Humanities in Education Award.