Saami vs. Metsähallitus: The Case for Corporate Recognition of Indigenous Rights 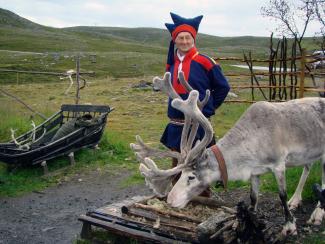 Successful negotiation between Indigenous Peoples and profit-driven corporations requires copious diligence and time. The Saami reindeer herders of Finland campaigned exhaustively for eight years to achieve protection of their homeland’s ancient pine forests. The eventual preservation of 80 percent of demarcated herding lands in 2010 remains a landmark accomplishment and precedent-setting example for Indigenous communities seeking corporate recognition of their established rights.

The only Indigenous people of northern Europe, the Saami have always maintained traditional reindeer herding as the central aspect of their culture. The free migration of grazing reindeer between cooperatively owned pastures takes place on Saami occupied land, 90 percent of which is owned by the government of Finland. In 2003 concerned Saami communities, along with Greenpeace, marked forest area crucial for herders. The land contains pine trees up to 500 years old, which act as an incomparably efficient carbon sink, and houses tremendous biodiversity including many endangered species.

These once prolific, culturally cherished old growth forests were intensively clear-cut and siphoned off to paper and pulp mills primarily owned by Metsähallitus, Finland’s industrial forestry service, which relied on this domestic timber source for 75 percent of its production. Finland contains just 0.5 percent of the world’s forests; the remaining 5 percent of its old growth forests are primarily used by Indigenous Peoples.

Metsähallitus’ unsustainable management practices, in conjunction with the government’s lax enforcement of legislation that would have preserved the old growth forests, posed a grave threat to Saami herders whose culture depended on close interaction with the forest ecosystem. Disregarding the area’s status as High Conservation Value Forests, Metsähallitus regularly practiced invasive clear-cutting and converted ancient forests to pine and spruce monocultures.

Despite international human rights mechanisms such as Articles 13, 14, and 15 of ILO 169, which specifically protect the land rights of Indigenous Peoples, and Finland’s Reindeer Husbandry Act of the Ministry of Agriculture and Forestry, which states that the land “may not be used in a manner that may significantly hinder reindeer herding,” Saami herders found their livelihood strained.

By ignoring Saami rights in favor of maximum profit, Metsähallitus’ unchecked logging resulted in the disruption of traditional pasture cycles, decimation of the central winter food source of hanging horsetail lichen for grazing reindeer, and according to assessments published by the Finnish Environmental Institute and Red Data Book for Finland, the endangerment of 70 percent of national forest habitat types and the near extinction of countless forest species. The government and the corporation repeatedly denied Saami requests for proper protection and demarcation of their vital forests in northern Lapland, failing to implement the already weak conservation standards of Finland’s Forest Act. Instead, Metsähallitus was merely asked to “collaborate” with reindeer herders—a process that was reportedly limited to informing cooperatives of when and where logging would occur, with no enforced obligation to obtain Free, Prior and Informed Consent before the clear-cutting.

Absent the promise of negotiation, Saami herders found themselves fighting an uphill battle against a corrupt conflict of interests: the majority of the logs cut by Metsähallitus were purchased by StoraEnso, a European paper supplier whose largest shareholder is the government of Finland. But the Saami were not alone in their struggle to reclaim their land. With help from Greenpeace and the Finnish Association for Nature Conservation, reindeer herders and the Saami Council mapped out areas that required preservation in order for herding to continue.

Mattias Åhrén, Chief lawyer for the Saami Council, credits Greenpeace’s assistance for the campaign’s success. “They put up a camp in the area and basically tried to stop the logging activities physically by placing themselves between forest machines and the forest. This camp was then harassed by the timber workers there, the employees of Metsähallitus. So of course, this conflict attracted media,” Åhrén said. Metsähallitus continued to deny Saami appeals to suspend logging pending the investigation of their practices, so eventually the UN Human Rights Committee was engaged to exert pressure on Finland. In 2004, the Finnish government was encouraged by the Human Rights Committee to negotiate with the Saami people and to “swiftly take decisive action to agree to an appropriate solution to the land dispute with due regard for the need to preserve the Saami identity.”

During this time, three reindeer herders from the village of Nellim began preparing a lawsuit against Metsähallitus and the Saami Council took critical action to inform StoraEnso’s consumers of the dispute. “We analyzed StoraEnso’s customers and addressed them, particularly in Central Europe and Germany, and basically [told them] that StoraEnso was purchasing timber that had been cut in violation of the human rights of those reindeer herders that use the area and requested that they should not buy any products from StoraEnso. We also contacted larger states in Europe, and that resulted in the UK sending their parliamentary committee to Helsinki to meet with us to see whether the public in the UK should stop purchasing StoraEnso’s products,” Åhrén said.

These actions prompted waves of demonstrations in Finland, Germany, the Netherlands, Belgium, and Italy, with consumers refusing to accept StoraEnso’s unjust business practices. In 2005, the lawsuit against Metsähallitus by Saami people from Nellim was settled temporarily by the UN Human Rights Committee through a logging moratorium. Even still, StoraEnso and its Forest Steward Council certifier refused to meet with the Saami Council and relevant NGOs before carrying out audits. In June 2006, StoraEnso released a finalized risk assessment claiming that with regard to FSC wood standards, Finland should be considered “low risk” and that disruption of the Saami homeland “does not concern the district.”

It was Åhrén’s belief that the biggest motivator for consumers to boycott a product is becoming aware that a corporation has evaded a commitment to conducting business in ethical ways—in this case, by violating Indigenous rights. “We addressed these ethical indexes because StoraEnso was listed on a number of those, and basically said that StoraEnso should be de-listed because of these activities. A couple of these [indexes] initiated research and started to investigate the situation, and contacted StoraEnso saying that they were now subject to these investigations,” Åhrén said.

Prior to the resolution of the lawsuits pending before the Human Rights Committee, StoraEnso, under intensifying pressure from dissatisfied consumers, announced in 2006 that it would no longer purchase any timber coming from disputed areas like Nellim. “It was quite effective,” said Åhrén of this victory. “When these corporations started to investigate StoraEnso they got really nervous, because if they should be de-listed from these indexes they would lose a large base of their investors, which would result in stock prices to fall.”

From 2009 to 2010, Saami reindeer herding cooperatives entered into negotiations with Metsähallitus to establish protection for forests important to traditional herding. Ultimately, out of the original 1,070 square kilometers of land mapped out in 2003, approximately 800 were designated off-limits from forestry either permanently or for the next 20 years. “We have had other campaigns, but none as large as Metsähallitus and StoraEnso,” said Åhrén. “It is difficult resource-wise to pursue these types of campaigns. You have to really pick your fight, pick the symbolic ones. Take those that might then be used as precedents, otherwise you will have way too much work to handle.”

Image: Logging of the forest area in Paadarskaidi in northern Finland by Metsähallitus posed a major threat to reindeer herding, which is central to Saami culture. Photo by Dutchbaby.