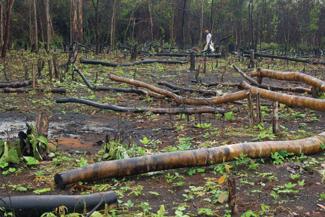 “Sustainable development is based on the principle that the right to development must be fulfilled so as to equitably meet developmental and environmental needs of present and future generations.” —1992 Rio Earth Summit

Coinciding with Cultural Survival’s (CS) 40th anniversary is the United Nations Conference on Sustainable Development (Rio+20) that will take place in Rio de Janeiro, Brazil on June 20–22, 2012. It is a follow up to the 1992 United Nations Conference on Environment and Development, also known as the “Rio Summit” or “Earth Summit.” The Earth Summit has influenced all subsequent UN conferences, which have examined the connection between human rights, development, and the need for environmentally sustainable development. For many environmentalists, the first Earth Summit was the beginning of a global environmental movement.

1992: The Beginning of a Global Environmental Movement
In 1992, some 172 governments and 2,400 representatives of non-governmental organizations (NGOs) attended the Summit, with over 17,000 people at the parallel NGO event “Global Forum.” Maurice Strong, Conference Secretary-General, called the Summit a “historic moment for humanity.” The Summit was also an important development for Indigenous Peoples and their rights related to the environment. The Summit acknowledged that Indigenous Peoples have a critical role to play in managing the environment. The importance of Indigenous Peoples’ traditional knowledge was recognized, and the international community committed itself to promoting and protecting the rights, knowledge, and practices of Indigenous Peoples. The Summit adopted three major agreements aimed at changing the conventional approach to development: the Rio Declaration on Environment and Development—principles defining the rights and responsibilities of governments, Agenda 21—a blueprint for action to achieve sustainable development worldwide based on Karioca Declaration of Indigenous Peoples, and Forest Principles—principles for sustainable management of forests worldwide. In addition, two legally binding conventions intended to prevent climate change and the eradication of the diversity of biological species were opened for signature at the Summit, the Convention on Biological Diversity (CBD), and the Framework Convention on Climate Change (UNFCCC)—which led to the Kyoto Protocol.

2012: Assessing Implementation and Respecting Rights
Rio+20 is aimed at assessing the implementation of international commitments that came out of first Earth Summit in 1992. The catch-all theme for this summit will be the “Green Economy,” a term now used in various contexts ranging from energy and labor policies to investment decisions. To some, this is merely another way to rename market solutions in favor of the private sector, rather than a true commitment to the environment. Many have voiced concerns that Indigenous Peoples’ rights will be disregarded. Participants will propose reforms aimed at ensuring more holistic and rights-based actions on global environmental and development issues. Governments will discuss the meaning, definition, principles of the “Green Economy” and action needed to implement it for sustainable development. Yet, already, the “Zero draft,” a draft negotiating document, fails to clearly define binding targets and actions for governments and the private sector.

Cultural Survival’s Executive Director, Suzanne Benally, will be one of thousands of Indigenous representatives who plan to assure any strategies implemented contain an Indigenous perspective and respect Indigenous Peoples’ rights. According to Benally, “Everyday Indigenous people are losing food systems, economic livelihoods, social, cultural spiritual ways of life as a result of the loss of the ecosystems they depend on. We can’t ignore climate change and the consequences of rapidly disappearing ecosystems. Indigenous people living in close relationship to the land can no longer respond or adapt as they might have in the past.” Precisely because of their traditional knowledge and understanding of the interconnectedness of human beings to place and land, Indigenous voices must be recognized and honored. “Our work and everyone’s work is to assure that the voices of Indigenous Peoples are heard and that their rights to their lands, languages, and cultures are at the center of the discussion and policy setting,” Benally emphasizes.

To Indigenous Peoples there is urgent action needed to honor and implement human rights mechanisms such as UNDRIP. This is should be expected from all the delegates who will attend Rio+20. Anything less diminishes the sacredness that is inherent in Indigenous belief systems inextricably tied to the environment and fragile ecosystems. To Benally, every human on the planet has a  responsibility. “The challenges Indigenous Peoples face are not insular,” she says. “What happens to us, happens to every human being.”