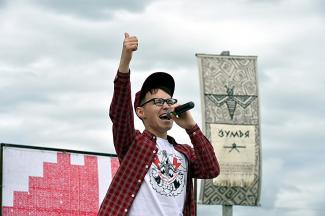 Born in small villages in Udmurtia, my parents are Udmurt and are fluent in Udmurt. When I was born they spoke to each other in Russian; everyone around me—kids on the playground, at school, teachers, and everyone on TV—spoke Russian. In my childhood the only place where people spoke Udmurt was the village where my maternal grandmother lived, the place where the Udmurt language is alive. It is there that I learned polite expressions like “тау бадзым” (thank you very much). As Russian-speaking children, we did not have Udmurt lessons and Udmurt literature classes at school.

When I was about to go to high school I started to develop a keen interest in Udmurt culture, and when I moved to Izhevsk I had an eye-opening experience: the phenomenon of Buranovskie Babushki emerged. They were the first band to sing Viktor Tsoy [1980s Soviet singer and songwriter who cofounded Kino, a popular and musically influential Russian band] songs in Udmurt. It was a boom that completely changed the perception of the Udmurt music. I always knew that I am Udmurt, but I was not interested in my native culture because it reached a point of stagnation when I was young. When the boom happened, I was thrilled that traditional Udmurt things could be connected to something modern like electronic music or English words. I felt empowered.

I read a lot of books about Udmurts, about the most dramatic moments in their history, about the language loss. I felt so bad for being 18 and not knowing my native language. The representatives of the old generation used Udmurt to talk to each other, and in a moment, when turning their attention to us, would switch to Russian. They did it deliberately, and we, as kids, did not find it strange. I never asked myself, “Why does my grandmother speak some foreign language I don’t understand, and why does nobody teach me?”

One day I bought a dictionary and read it in a single evening. Then I tried to read books in original Udmurt despite the fact that I did not know the language. At that moment I was so inspired, I had a burning desire to learn it. I started listening to Udmurt radio, to the old popular songs, although I did not like them. Gradually I figured out how to spell words, what the language structure is. The period when I started identifying myself as an Udmurt speaking person began when I met representatives of a youth organization in Shundy. At exactly the same time, I met the guys who played for the Udmurt punk rock band, Amiso Wott. It was much easier for me to talk to them, as they did not make fun of my accent.

I have been writing poems since childhood. When I became interested in Udmurt, I started including Udmurt words in my Russian poems. When I issued a bilingual book of poems, I faced a lot of criticism followed by a creative block. Sometimes Udmurts treat their language as something fragile that cannot be touched. People can’t see the language as a commonly available and real tool. They don’t treat it as a hammer that can be used by everyone, they just see a crystal vase. But the language can be quite flexible; you don’t have to be afraid of changes, otherwise it remains just a museum piece.

Now, all of my projects are connected with Udmurt. I can’t imagine my creative work without it, and I hope my kids will live in a more Udmurt-speaking world and use the language more often. As for my grandchildren, I do believe they will watch Udmurt cartoons, movies, soap operas, and the language and the culture will become a full-fledged part of the life in our republic.

— Bogdan Anfinogenov (Udmurt) is a musician and poet and Ph.D. candidate at the Udmurt Institute for History, Language, and Literature.