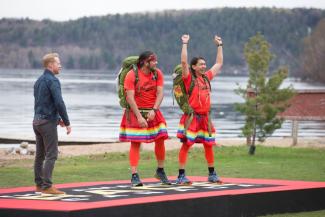 After travelling more than 20,000 kilometers across 6 provinces, 1 territory, and 14 cities, James Makokis (Cree) and Anthony Johnson (Navajo/Diné) are the first Indigenous, Two-Spirit couple to win The Amazing Race Canada. Their appearance on the reality television competition series that features teams in a grueling race across Canada and the world served as an opportunity to confront stereotypes, homophobia, ignorance, and racism, and raise awareness of issues faced by Indigenous Peoples in Canada and the United States. Makokis and Johnson Indigenized the race starting from their team name, Team Ahkameyimok (in Cree: “Don’t give up, keep going, use whatever you have to get something done.”) Their team motto was also Ahkameyimok! “This is a phrase our elders use to encourage us to do our best and keep going no matter how difficult a situation may be. It’s also fun to say,” they explain.

Makokis’ and Johnson’s clothing called attention to specific issues; handmade red ribbon skirts and bandanas for missing and murdered Indigenous women and girls, and “Water Is Life” blue shirts to draw attention to the cultural and ceremonial importance of water. Their participation was unapologetically Indigenous and they both serve as strong role models for Indigenous and LGBTQIA+ youth, as can be seen from photos that went viral on social media of young children dressing like them for Halloween. In a CBC interview, they posited, “If there’s two guys wearing a dress, they want to express their identity differently than the norm, then why does that matter? How is it hurting somebody else?” At the final Pit Stop of the season, the duo spoke from their hearts: “We’re sharing this stage with all of those people who helped us along the way—our communities, our elders, our family members—and we wouldn’t be here if it wasn’t for them.”

Makokis is a Two-Spirit doctor from the Saddle Lake Cree Nation near Edmonton, Canada, where he runs his practice specializing in transgender health. “Two-Spirit is a contemporary English term to reflect gender diversity that Indigenous nations have always had. As Indigenous people, we’ve always had gender diversity and sexual diversity in our Nations before colonization existed on Turtle Island (North America). With the imposition of colonization, Christianity, residential schools and ‘the Sixties Scoop,’ a lot of those teachings of gender diversity have been lost and a lot of people are searching for their identity as Two-Spirit people and the roles and responsibilities that come with that,” he says.

From the age of four, Makokis knew he wanted to be a doctor. Since then, he has continually faced adversities in the medical system related to being Indigenous. As an adult, he endeavors to break through the racism that Indigenous medical professionals face every day and gain respect for Indigenous practices. “Being from a marginalized community, being a Two-Spirit person, being an Indigenous person, I know how scary it can be to access care from the healthcare field,” he says. “It’s important to understand in the health field and health professions—whether that’s medicine, nursing, pharmacy—that there was an Indigenous health system here prior to contact. When we talk about Indigenous medicine and Indigenous ceremonies, those form the foundation of our health system. The original medicines on this continent, on Turtle Island, are Indigenous medicines. They’re not ‘alternative’ medicines. When we frame things from that perspective, Western medicine is actually ‘alternative’ medicine. For the health system and health practitioners to know that is important.” Makokis trained at the University of Ottawa and received additional certification from the Aboriginal Family Medicine Training Program at the University of British Columbia. He also served as the national spokesperson for the National Aboriginal Health Organization’s “Lead Your Way” National Aboriginal Role Model Program, and as the chair of the Indigenous Wisdom Council of Alberta Health Services. He currently serves on the Waakebiness-Bryce Institute of Indigenous Health board at the University of Toronto.

Johnson is a project consultant at Kehewin Health Services and an artist from the Navajo Nation, but now lives with Makokis in amiskwaciy-wâskahikan (Edmonton, Canada), Treaty Number Six Territory. Johnson attended Harvard University and has a degree in economics. He is working to revitalize traditional Cree/Nehiyaw birthing practices, medicines, and ceremonies in a contemporary midwifery environment. “Part documentarian, community organizer, searching mystic, and product development, my role is to build a system which enables Kehewin Cree Nation to rebuild their community and culture, one family at a time,” he explains. Before moving to Canada, Johnson worked as a consultant, contractor, and representative in Navajo Nation. He describes the challenges in finding work on the reservation: “I took time to reconnect with my Navajo heritage. Ideally I would have found work on the reservation, but because the unemployment rate is around 48.5 percent, it was next to impossible. Thus, I earned money by providing whatever services I could to whoever they would help. Though this initially started as a means to an end, it turned into a meaningful life experience that has taught me the power of connecting with others. A highlight included tutoring a high school senior for 12 weeks and seeing her SAT score increase by 300 points,” he says.

The couple met after Johnson spotted Makokis as the centerfold in OUT Magazine about the Montana Two-Spirit Society on Facebook. The two met in person and the rest was history. Having grown up in similar communities, the commonalities in their lives brought them together. “We both want to show Indigenous youth that they can be successful, while also staying committed to their cultural and spiritual ways,” they say. They both enjoy marathons and triathlons and were married while running the 2017 BMO Harris Vancouver Marathon. They were the first couple in history to do so, and then completed the race as a married couple. 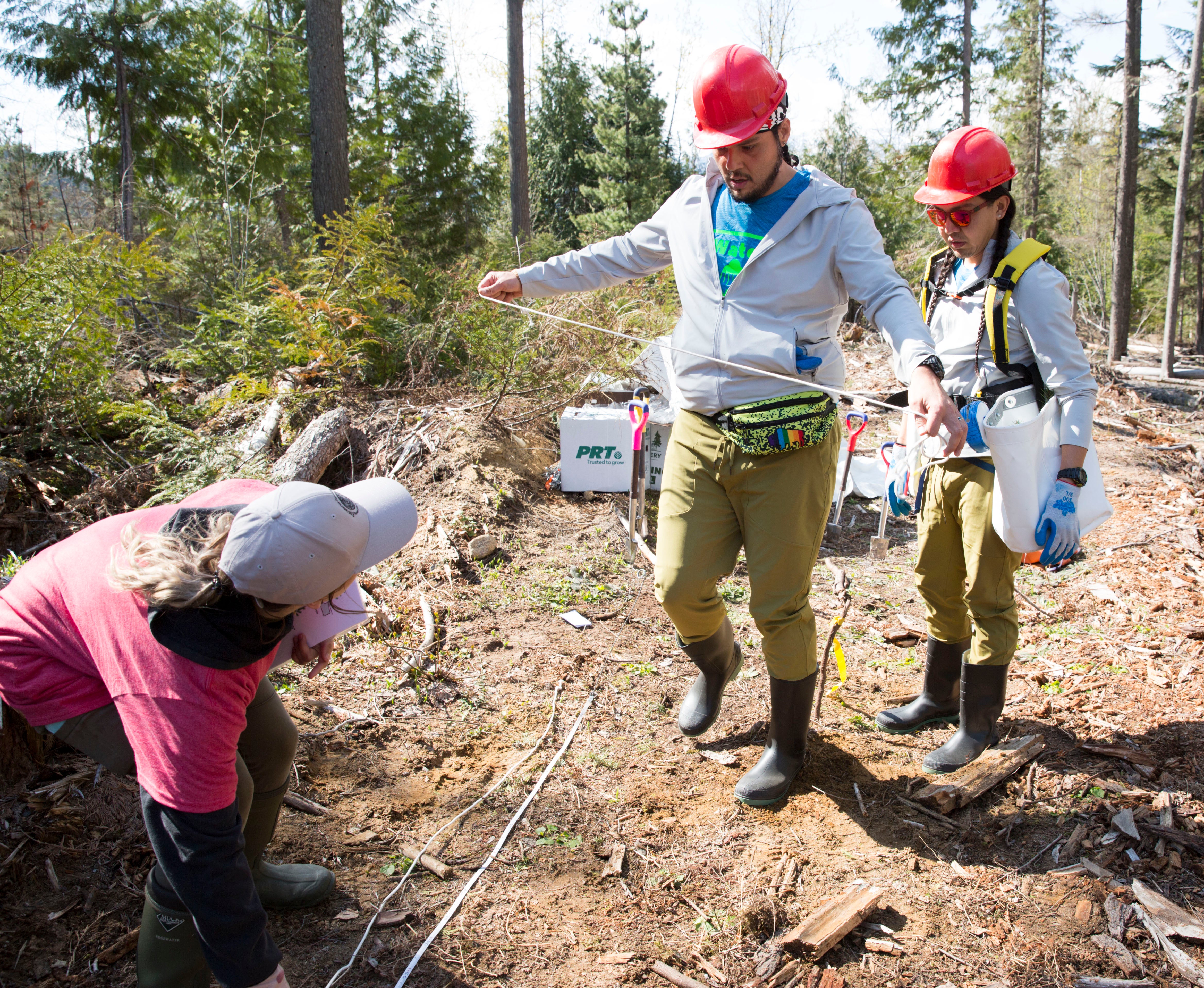 Winning first place in The Amazing Race Canada, Makokis and Johnson received two brand new cars, a once in a lifetime trip for two around the world, a $250,000 cash prize, and the coveted title of The Amazing Race Canada Champions. But the real prize is the exposure and awareness they have raised through their participation. The couple are now focused on building a cultural healing center for the Kehewin Cree Nation. “Building a cultural healing space is a huge step towards righting the wrongs of the past in this country. It’s a huge step towards rebuilding the Cree medical system, which was oppressed and decimated over hundreds of years,” Makokis says, adding, “As Kehewin works towards rebuilding that within their own nation and community, they’re going to see huge results of having healthier and happier children, healthier and happier families, and a healthier and happier nation, which is going to improve and maintain their sovereignty.”

Reflecting on the meaningfulness of their experience on the show, Johnson says, “It’s a bit surreal to be considered LGBTQIA+ role models because we are really just being how we are in everyday life, however crazy that may be. It’s our hope that by being open about who we are, that every LGBTQIA+ youth will feel safe to be who they are. We have heard over and over from families who were able to have conversations with their kids about Two-Spirit, Indigenous Peoples, LGBTQIA+ Peoples, and MMIW [Murdered and Missing Indigenous Women] after seeing us on the show.” Makokis echoes Johnson’s comments: “A lot of my transgender patients have repeatedly shared similar sentiments, ‘Because you and Anthony were on the television and played how you played and were who you are, my parents and family look at me differently now and are accepting of who I am.’ This is one of the greatest accomplishments we could have achieved with our time on the show, and it speaks to the importance of having diversity in all aspects of the media, including fun reality television programs. It actually can be lifesaving.”