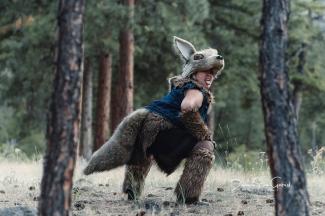 Madeline Terbasket (Syilx, Ho-chunk, and Anishinaabe) is a Two-Spirit performing artist from Canada. Also known by their drag name,
Rez Daddy, they do traditional storytelling, burlesque, drag, and filmmaking. Terbasket grew up in Similkameen Valley in British Columbia and now resides in Penticton, BC, where they are reimagining traditional stories with their physical comedy, Queerness, and vulnerability. Terbasket’s stage performances allow them to reconnect to their Two-Spirit, while kinship and traditional stories are reminders to stay connected to their identity and be proud of being Syilx. Traditional oral stories within Indigenous communities hold values and histories and strengthen connections to the land, culture, and language. Terbasket found medicine in storytelling and the healing remedies of laughter. Nati Garcia recently spoke to Terbasket.

Nati Garcia: Tell us about your journey as a Two-Spirit artist.
Madeline Terbasket: The reason I do Queer storytelling is that I didn’t get to hear stories growing up that had Queer characters in them. Our traditional stories had the Queer characters taken out of them because of colonization and shame. I have written a series of stories featuring Queer characters in the style of Captikʷł [a collection of teachings about Syilx Okanagan laws, customs, values, governance structures, and principles that define and inform Syilx Okanagan rights and responsibilities to the land and culture.] It’s so fun to perform them because I know that the youth need to hear them. I came out as Two-Spirit in 2019; before then, I didn’t know what Two-Spirit was. It wasn’t something that my community knew about or talked about. I knew you could be Indigenous and Queer, but I didn’t know there was a term for it. I went to a workshop with Juacho Allen Linley and they talked about a word in our language for being Two-Spirit, and that totally just blew my mind. In English, it is a female deer who grew horns like a male deer. That completely changed my life and made me feel like there was a place for me. I knew I was bisexual my whole life, but I didn’t know I was non-binary until 2019.

Changing my pronouns has been a big change in my life. It took [my family] a while to get my pronouns down because I started out with she/they. When people used they/them pronouns for me, I felt so myself and so I just changed to them. My family is very supportive of me. In my Indigenous community, we are a small Indian Band. We actually had our second annual Pride Day. It was so cool because it wasn’t the town putting on Pride, it was our Band. The Indigenous community put it on and the rest of the community showed up. That was amazing. Indigenous communities need to work on unlearning things that were taught in residential schools and all the colonial thoughts about Queer people.

Have you had to do archival research to find these terms that existed pre-colonially? Where do you draw your inspiration?
I haven’t done that research. Mourning Dove [Christine Quintasket (Syilx and Sinixt)] was our first Syilx author. She wrote about our Coyote stories; Coyote was like our trickster. In the back of her books, that’s where she put a lot of the dirty stuff, and sometimes the Queer stuff is in the back of the book as well. There are characters you know are gay, but it’s on the down low. I get my inspiration from Mourning Dove and a lot of our Elders. I’ve heard them tell stories my whole life. When I first started telling stories, I would pretend to be an old Native man. I get a lot of my humor from watching Native TikToks as well. 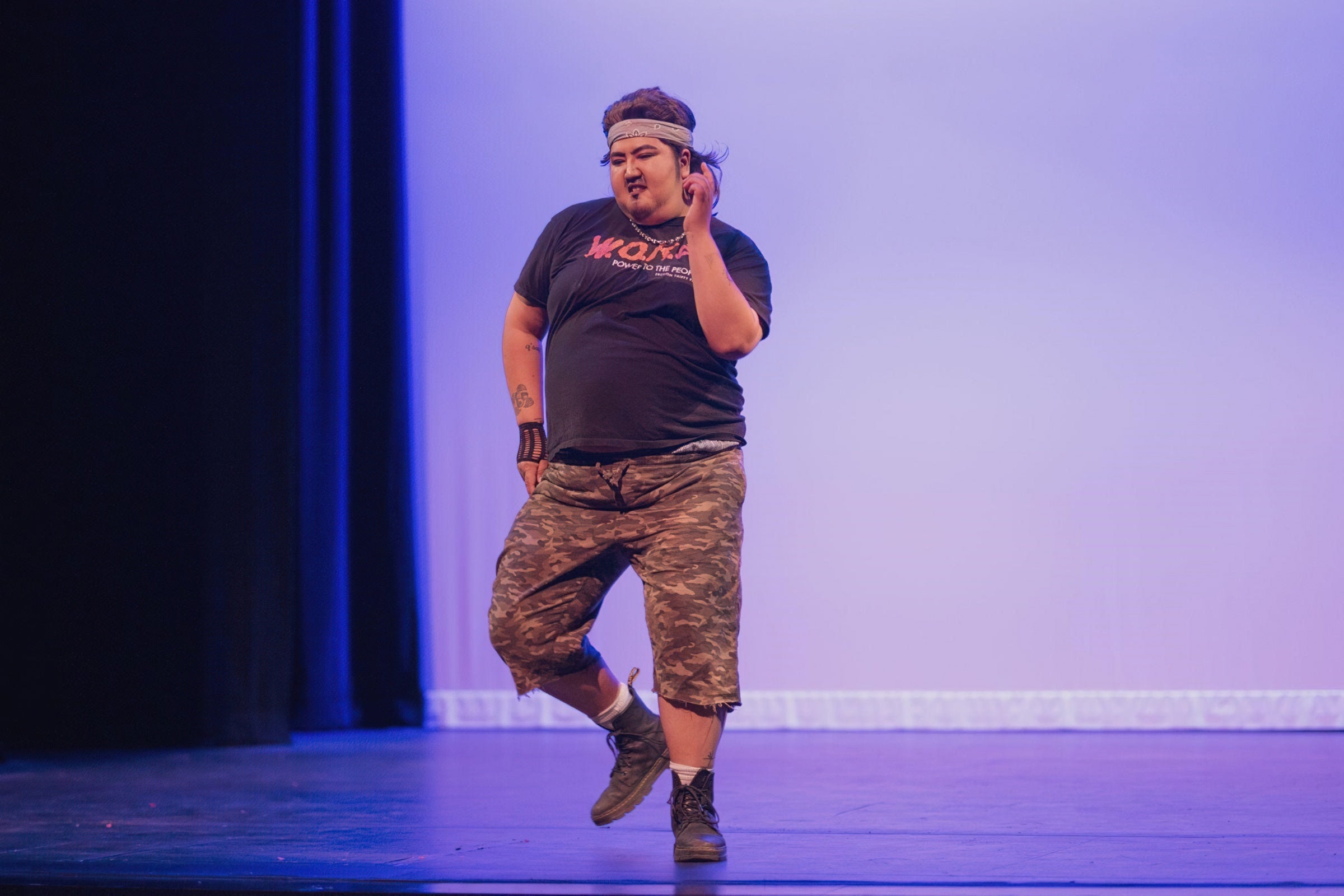 What empowers you to draw out these characters and represent them in a positive way?
One of my stories is about a young person named Badger. Badger wants to dance in the powwow and wants to dance in a style that isn’t typically their gender. They want to dance chicken in the Powwow, and to do that they have to come out to their mom and get regalia made. That story was based on how I feel about Powwow, that it shouldn’t be so gendered. It should be about what style you’re dancing. I really want to dance chicken; that is why I wrote that story. At the end, everyone was standing and holding up Badger as they danced around the arbor. It’s so special to uplift Queer people and show them respect because a lot of our Indigenous Queer people have to leave their community to feel safe and to feel loved.

The other one is about a lesbian sparrow. She asked Creator for help because she’s so lonely. Creator said, if you sing to me every day, I’ll send you a lover. She gets these lovers who turn out to be guys because she didn’t tell the Creator that she wanted women lovers. That one is about not assuming people’s sexuality, not assuming that you know someone just because they are a certain gender. It’s definitely humorous and powerful. Humor connects people and draws them together and creates space for learning on a different level. That is why I’m so passionate about these stories, because they’re letting people know about Queer people, their struggles and triumphs.

How is the millennia-old tradition of storytelling related to your identity and culture?
I take storytelling very seriously. My people have been telling stories since the beginning. We have our trickster, Coyote, who teaches us by doing the wrong thing so that we learn how to do the right thing based on his mistakes. I’m not just telling stories to tell stories. I want to make people feel something, learn something, and also just have a good time together. Laughter is medicine; our people have known that forever. I also really love to use my body as part of the storytelling. I do a lot of physical comedy. There could be parts of my story where I’m not talking and I’m just making faces. That’s really important to model to people because many people are kind of stuck in their head. Your body holds so much of your past and your trauma, all your emotions. 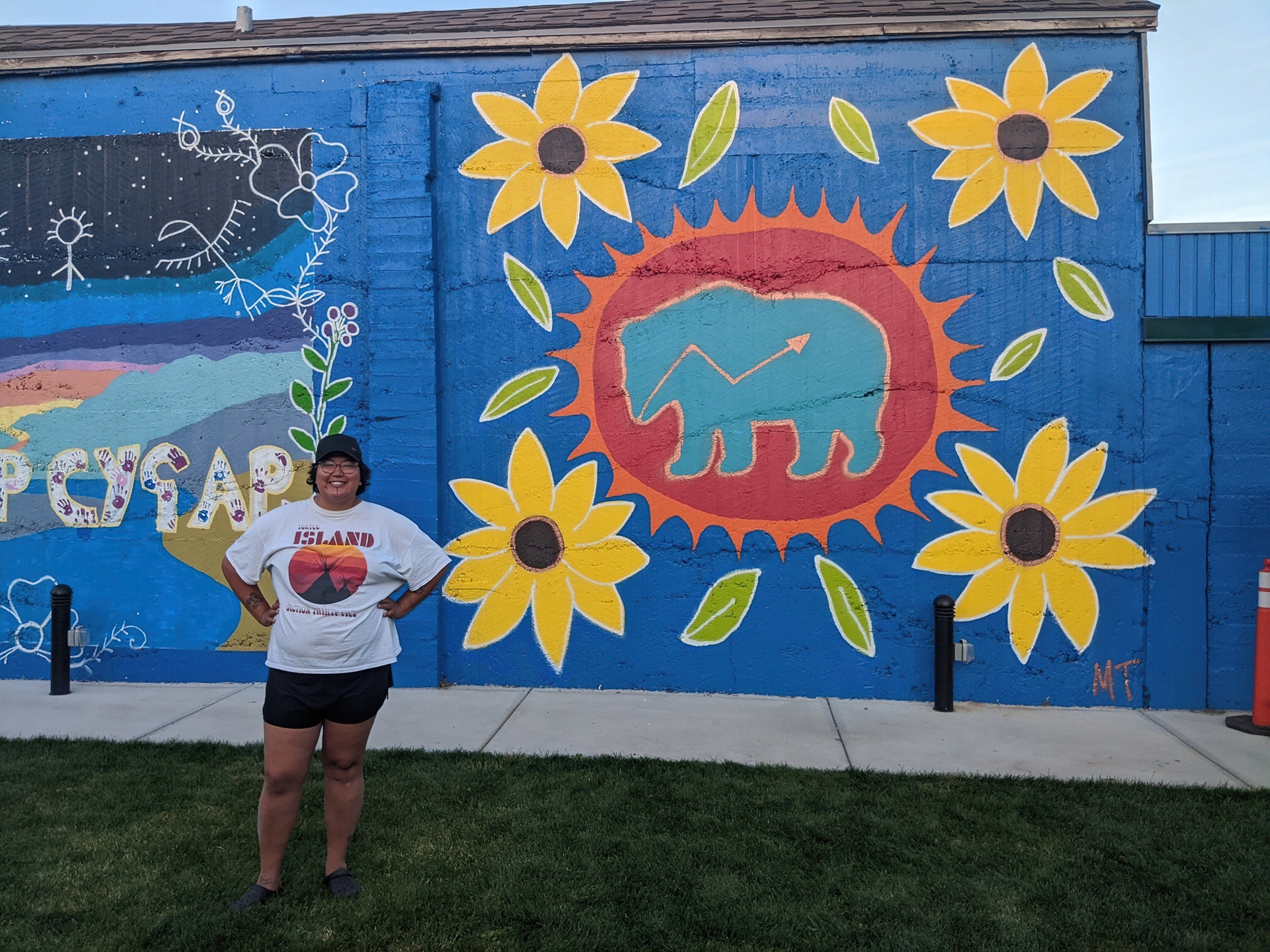 What message do you have to share with anyone out there that may have similar experiences as you?
Coming out has had a ripple effect on people around me to be more accepting of themselves. I think the more that we all come to accept ourselves in any way, Queer or not, just accepting who you are and expressing that, it will just have such beautiful effects on the world. If we all just lived as our authentic selves and had more joy in our lives, that would make the world so much more beautiful. I haven’t talked about my mental health. I just want people to know I live with bipolar disorder. It has made my life up and down, but it makes me grateful for the times I have that are just still and calm. There are many times in my life when I’ve been at my lowest. I’m just so grateful that I am here today to live this beautiful life that I’ve created. I want to say that because there are so many youth that we’re losing because they’re not accepted. There’s so much more that’s coming for you. It might be dark now, but I hope you know that things will get better.