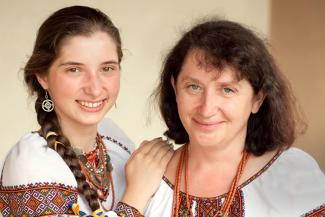 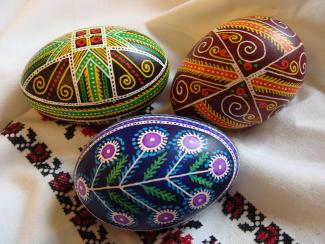 Ganna Nepyivoda, a professor at the M. Boichuk Institute of Decorative and Applied Arts in Kyiv, Ukraine, represents the culture of the Hutsuls, an ethno-cultural group of Ukrainian highlanders. For centuries, the Hutsuls have inhabited the Carpathian mountains and are associated with the colorful and sophisticated craftsmanship of their embroidery, carpet weaving, and egg decorating.

Born in the village of Vyzhnyi Bereziv of Ivano-Frankivsk oblast (province), Nepyivoda started learning traditional embroidery and carpet weaving at a young age from her mother. She later earned degrees from the Folk Arts College in Kosiv and the Institute of Applied Arts in Lviv. There she obtained her skills in the craft of leatherwork and pysanka (painted eggs), and has since managed to revive the almost-disappeared pysanka designs of her local community. “To refine the delicacy and fascination of original folk art is my spiritual commitment,” she says.

The Hutsuls believe that the fate of the world depends upon the pysanka; as long as the custom continues, the world will exist. Each village in the Carpathians had its own pysanka patterns, symbols, meanings, and rituals for decorating eggs, which were passed down from mother to daughter through the generations. By the 1980s, however, the art of the pysanka had nearly been lost. Nepyivoda responded by researching and reconstructing these traditions, learning how to write on eggs with melted beeswax. She collected old Bereziv pysankas, read literature sources, and made reconstructions based on oral information.

Pysankas are made using a wax batik method. Beeswax is scooped into the stylus and heated in a candle flame. (A stylus, known as a pysak, is a piece of thin brass wrapped around a needle forming a hollow cone and attached to a small stick with wire.) The molten wax is applied to the white egg with a writing motion, and any bit of shell covered with wax is sealed to remain white. The egg then gets dyed yellow, more wax is applied, and then it is further dyed orange, red, purple, and black. The dye sequence is always light to dark, and bits of shell covered with wax remain that color. After the final color is applied, usually red, brown, or black, the wax is removed by holding the egg next to the flame and gently melting it.

With the advent of Christianity, the symbolism of the egg was changed from representing nature’s rebirth to the rebirth of man. The most important symbols used on pysankas in the Hutsul region include triangles, which symbolized clouds or rain; quadrilaterals, symbolizing a ploughed field; spirals, the mystery of life and death; and dots, representing stars. Cosmological, floral, and animal motifs also are used to adorn the egg. Pysankas are typically made to be given to family members and respected outsiders during the last week of Lent, Holy Week, before Easter. To give a pysanka is to give a symbolic gift of life.

Nepyivoda considers it her mission not merely to preserve and revive ancient traditions in her own works, but also to strengthen public awareness through advice to women in her community and by teaching her students. Her efforts are now continued by three young artisans working in Bereziv style, and she offers free master classes on pysanka writing for anyone who wants to learn the art. “Unfortunately, now once-widely spread Hutsul crafts are degenerating under the pressure of cheap mass production,” she says. “The danger of erosion of authentic designs and coloration is serious. Further evolution of this tradition through its new interpretations is one of the pillars for the tradition’s survival.”