Raja Devasish: Outcome Document as a Tool for Lobbying 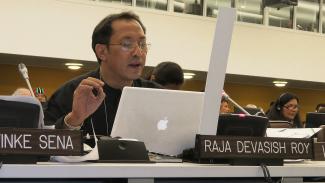 "I would like to look at the outcome document with regard to the actors. I think there are two distinct sets of actors apart from Indigenous Peoples: one are the States, at the national level, and the other is the UN system. In the case of the UN system, I think we can be reasonably optimistic of a little more meat to the skeleton, the skeleton being the UN Declaration. But with regard to the national government, it’s actually a very confusing and vague picture. This is the good thing: this is a political commitment. It’s a world conference. So even if you repeat the same language from the UN Declaration and put it here [in the outcome document] with a little more of an action-oriented tinge to it, Indigenous Peoples can use it as a tool for lobbying. With regard to action-orienting the activities on land, or health, or education, or women’s rights, in that case I think the situation varies. With some governments that have been very strong on Indigenous rights, like Bolivia, Mexico, Denmark, and so forth, I think this is good. But I think the weakness in this world conference is in mobilizing a lot more governments, particularly from Africa and Asia."