Protecting Our Food, Our Environment, and Our Rights 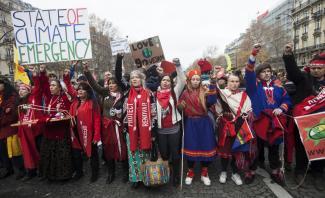 In November 2015, Indigenous people from around the world gathered at the Indigenous Terra Madre in India to showcase their cultural food systems and discuss efforts to protect their food sovereignty against the impacts of globalization. Many voices expressed the sacred relations and interconnectedness of people, animals, and the natural environment as a holistic concept of life at the center of food sovereignty. The Kenyan pastoralists referenced by Elizabeth Hacker “spoke very emotionally about being connected to their animals, about how the animals were their brothers and sisters, about how this was their life source.” As Helianti Hilman Najiib states, “If we look at Indigenous agriculture, it is based on spiritualism; the way humans interact with the divine… It means that we will not harm the soil, will not harm the environment, will not harm the other living creatures around us. It’s not about the volume of the productivity of their land, but whether the food is being blessed or not.” Finally, Dayamani Barla offers the reflection, “Mother Earth gives us so much. I saw a fallen tree that was birthing new life, life that was already taking the avatar of the forest. Indigenous Peoples always talk about community and collective rights. We know our survival is bound with the survival of nature.”

This theme of human survival connected to survival of nature was echoed by the 250-plus Indigenous delegates attending the 21st Session of the Conference of Parties (COP 21) in Paris, France, where world leaders, environmental activists, human rights organizations, and other stakeholders sought to develop a universal legally binding agreement on climate change. Indigenous Peoples whose communities are the most
vulnerable to climate change worked to ensure that the rights of Indigenous Peoples be included in the binding portion of the Paris Agreement. Sadly, they were not. As Cristina Coc aptly states, “Being people of Mother Earth, we recognize that it’s integral to ensure that Indigenous People’s traditional knowledge . . . is considered important when we think of development. It’s these forests, it’s these lands that give us sustenance, our way of life that are essential for the survival of future generations. It’s important to ensure that the voices and concerns of Indigenous Peoples, calling for the respect for the integrity of our natural world, be incorporated directly into the dialogues where it concerns climate change.”

Reflecting on the articles in this issue of the Cultural Survival Quarterly, I am deeply appreciative of and indebted to our many brothers and sisters and the elders who continue to fight for our rights, our lands and territories, our languages, and our cultures on the front lines in their communities and in national and international spaces.
Suzanne Benally, Executive Director
(Navajo and Santa Clara Tewa)

Indigenous Peoples’ delegation at the Post-COP 21 Demonstration on the Champs Elysees in Paris.