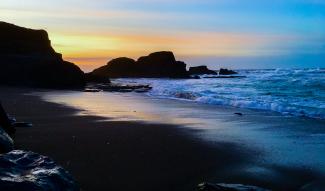 The Sinkyone Wilderness is located in Northern California, about 200 miles north of San Francisco. A place of great cultural and spiritual significance for Indigenous Peoples of this region, it comprises the southernmost end of the longest stretch of permanently protected coastal wilderness in the continental United States. It is the westernmost portion of the vast Sinkyone traditional territory that includes large portions of the Wild & Scenic Eel River watershed, the stunning mountainous “Lost Coast,” and the fragmented remains of a 3,000-year-old rainforest.

Since time immemorial, the Sinkyone and neighboring Tribal peoples of these lands and waters have used responsible ways to care for this region’s sacred lands and waters. Tribal traditional practices produced much of the biological diversity and abundance of these ecosystems. Extensive systems of traditional protocols include management practices conducted with prayer and ceremony, such as the rotational burning of coastal prairies and woodlands to ensure health and productivity of important food and medicine plants; selective gathering of seaweeds and kelps, basket making materials, roots, berries, and myriad other plants; removal of berms at river mouths to enable salmon migration; careful transplanting of desirable plant and animal species; and rotational hunting and gathering of a multitude of animal species. Intimate knowledge of the natural world, informed by detailed cultural instructions for how to utilize, care for, and respectfully interact with all of nature ensured a life of balance for human people as well as the plant and animal relations. This was the Sinkyone way of life within the redwoods and tanoaks, and along the ocean for countless generations.

In the mid-1850s, the Sinkyone and other California Indian peoples were violently confronted with invading multitudes of Euro-American settlers. Within 15 years, most of the Sinkyone were annihilated as a result of widespread massacres, slavery, forced relocations, starvation, land theft, introduced diseases, rape, impoverishment, and other atrocities. State and federal governments paid white citizens bounties for the scalps of Sinkyone men, women, and children, and many young people were sold as slaves to wealthy families throughout California. The U.S. Army removed survivors to concentration camps called reservations, which were established throughout the region. Sinkyone survivors married into other Tribal peoples of the region and eventually became members of several federally recognized Tribes now located in Northern California. Even in the face of this profound suffering and loss, however, the descendants of original Sinkyone Peoples retained their ancient connections to their traditional lands, to which they have continued to travel seasonally to gather traditional foods and medicines as well as to hold ceremonies and offer prayers.

With the genocide of the Sinkyone people came the ecocide of the ancient Kahs-tcho (Redwood trees), considered by local Tribes as especially sacred. The people used various parts of the redwood in the manufacture of their houses, clothing, baskets, fish traps, canoes, and a host of other items. Commercial harvest of the old growth redwoods of the region began as early as the 1850s, but large portions of the ancient rainforest remained intact until the late 1940s when an enhanced type of bulldozer dramatically changed harvest methods and the rate of logging. Steep slopes that previously had been inaccessible were now open to unrestrained clearcutting. The ensuing rampage destroyed much of the original redwood ecosystem and set in motion a severe decline in the health and productivity of native salmon fisheries. This continued largely unabated through the 1980s.

A long succession of commercial timber interests laid waste to vast acreages of redwood within Sinkyone and neighboring territories. These interests grew wealthy from their exploitation of the sacred redwood tree, while Tribal peoples who had lived upon and cared for these lands for millennia suffered many decades of economic impoverishment and oppression from societal racism and unjust governmental policies. Today, less than four percent of the region’s original old growth redwoods are still standing, with a few small residual pockets of ancient redwoods protected in national and state parks.

During the late 1960s and ’70s, people disillusioned by consumerism and other ills of American society sought refuge and peace within the north coast’s rainforest. They soon were confronted by massive clearcut logging operations, as timber companies continued their expansion into previously unentered areas of old growth. These “back-to-the-land” people began organizing protests, sometimes chaining themselves to redwoods, as they blockaded logging sites. The movement grew as allies joined and lawsuits were filed. Some reached out to local Tribal people, and a crucial dialog began between Tribal community leaders and the environmental movement. Soon, Tribal members were joining non-Native activists and protesters at various sites on Sinkyone land threatened by logging. At the same time, a similar movement to halt logging of old growth cedar was beginning within Tla-o-qui-aht First Nation territory on the west coast of Vancouver Island in Canada, as well as in other locations throughout Tribal lands across Turtle Island (North America).

A legal victory in 1985 (EPIC v. Johnson) opened the door for the eventual return of nearly 4,000 acres of traditional Sinkyone land back into the hands of local Tribal peoples. In December 1986, a Native peoples’ cultural land protection organization, the InterTribal Sinkyone Wilderness Council, was formed in response to the planned divestiture of 7,100 acres of coastal Sinkyone land owned by the timber giant, Georgia-Pacific Corporation. The Sinkyone Council was founded by local Tribes that retain cultural ties to the Sinkyone region. It was established specifically to acquire and permanently protect the 4,000 acres from further commercial harvest, and as a place to reestablish and revitalize the traditional cultural lifeways of local Tribal nations, all of which have connections to Sinkyone lands and waters.

After a 10-year effort focused on gaining support and approval from state agencies and the public, in August 1997 the Council purchased the 4,000 acres of Sinkyone land from The Trust for Public Land, a national land trust that had stepped in to purchase and temporarily hold the property. The transaction, enabled by support from the Lannan Foundation and others, marked a historic return of local Tribal peoples’ presence to the land and its protection in perpetuity from future threats of development, industrial extraction, and fragmentation. Conservation easements legally protect the land’s cultural and ecological values in perpetuity.

The Council has completed important work on native salmon fisheries restoration, watershed rehabilitation, backcountry hiking trails, protection of important cultural places, cultural-educational outreach, and promoting healing and traditional care for these sacred lands and waters. It holds traditional cultural gatherings, which are open to the public, on the land that bring together Tribal community members to enjoy and experience Sinkyone. It has played pivotal roles in helping lead marine protection initiatives and protecting local Tribes’ traditional gathering rights within the north coast’s Marine Protected Areas, and has taken a lead role in efforts to protect sea life and the Tribes from impacts of the U.S. Navy’s testing and training activities. And, it is contributing to current efforts to prevent offshore oil drilling recently proposed by the Trump Administration.

The Council has long been blessed by strong Tribal leaders who have brought to Sinkyone their vast experience as traditional culture-keepers, environmental and cultural activists, heads of Tribal governments and programs, and community and economic development leaders. Currently, the Council’s board of directors is comprised of nine women and one man, demonstrating the ongoing contribution and commitment from the women of local Tribal communities. Within Indigenous cultures around the world, matriarchal leadership has always been paramount to the continuum of Tribal traditions, and to understanding and carrying out our responsibilities to respect and care for the Mother Earth. The Sinkyone Council and its member Tribes are thankful for the leadership of these Indian women, and we honor them for their many sacrifices, amazing leadership, and tremendous vision.