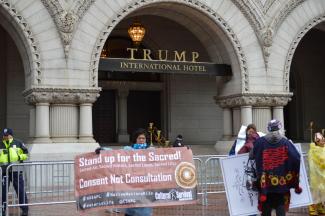 As Indigenous Peoples, we continue more than a 500-year-old fight for our lands, cultures, and languages. Today, we fight to protect our natural resources and Mother Earth as we face the dire consequences of climate change and imminent threats of complete loss of some of our communities. We draw upon knowledge given to us by our ancestors to be in spiritual relationships with Mother Earth and all living things, and appropriately honor and steward the land. There is no doubt that as a human race we are at a crossroads for making intentional decisions and taking immediate actions to ensure the survival of our future generations. Indigenous Peoples hold place-based knowledge about our environments and practice Indigenous science in maintaining special relationships to the land and in adapting and mitigating climate change. Our challenge today is the unprecedentedly rapid rate at which anthropogenic climate change is occurring.

In early April, the Rising Voices conference brought together over 130 participants, including students, climate scientists, Indigenous community members, educators, and other science experts, from around the globe in addressing climate change and strategies for action. In this issue of the CSQ, you can read excerpts of the conversations that took place and the themes that emerged from discussions about the need, opportunity, and caution of Western science and Indigenous science working together to address climate change and climate justice. Outcomes from the voices of the conference will be developed and disseminated through appropriate for a calling upon climate scientists and policymakers to listen to and include Indigenous Peoples at decision-making tables.

A few weeks later, the People’s Climate Change March in Washington, D.C. reminded the world that Indigenous Peoples are on the frontlines of climate change and are demanding their rights. Roberto Borrero (Taíno) writes that the March was “a historic opportunity to show the current U.S. administration, and the world, that the movement is ready—not only to fight the fossil fuel industry, but to reject racism, hatred, and xenophobia.” Nania Kodi (Nuba from Sudan) participated because she “felt the need to represent the Indigenous woman who contributes the least but gets affected the most by climate change.” She reminds us that “climate change is not only about its effects on the availability of water and food security, but it also affects health via malnutrition and sexual reproductive health as well as security via physical and sexual abuse while women and girls go in search of water and food.”

We also share two examples of Māori Iwi in New Zealand claiming their ancestral rights and leading their development based on their traditional knowledge and values. Ngāti Rangi renegotiated land use agreements with the return of several cultural sites and the promise of developing a new governance and management framework for the Whangaehu River catchment. And after years of struggle, the Māori landowners of Taheke 8C are fulfilling their right to development and are moving forward with a strategy for self-development and the development of geothermal energy resources on their land. They secured a partnership with a national energy producer, Contact Energy, and also entered into a project participation agreement with a neighboring Māori landowner, the Whangamoa Trust, to facilitate Māori benefit sharing.

As Indigenous Peoples, we will continue to embark on new strategies to find contemporary solutions to climate change and to achieve climate justice; incorporating and maintaining our traditional knowledge as the key for sustainability into the future.