Our Right to Communicate: Getting the World to Listen 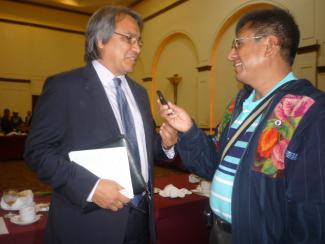 In Guatemala, community radio is at risk. Community radio stations are frequently the targets of police raids at the orders of the government and commercial media magnates. Despite promises made in the Guatemalan Constitution and the Peace Accords, the telecommunications law does not allow licenses for nonprofit community radio. Only mainstream commercial radio and government-run radio are legally permitted, leaving community radio in legal limbo. Now, a new bill has been submitted in Congress that would reform the criminal code to sanction the imprisonment of individual representatives of radio stations that do not have legal authority to broadcast for up to 10 years. The passage of this law is a threat to the dozens of community
radio stations across Guatemala and could force them off the air for good. The goal of my trip to the United States in May as Cultural Survival’s Community Radio Program Manager was to bring international attention to this critical issue.

My journey commenced with a meeting with Cultural Survival’s board of directors and donors. My next stop: the UN Permanent Forum on Indigenous Issues in New York City. I received word that I could meet with the UN Special Rapporteur on the Rights of Indigenous Peoples, James Anaya, the following Monday at the very last minute on Friday afternoon. It would just be a 20-minute meeting, but it was an opportunity we couldn’t pass up. Scrambling to make plans, we booked a ticket on the earliest high speed Amtrak train out of Boston to New York. Sunday afternoon we heard the news about an accident on the Amtrak line; two trains collided in Connecticut, halting all service between Boston and New York “indefinitely.” It was 4 p.m. on Sunday, and I needed to be at this meeting in just 18 hours. After a flurry of Google searches and phone calls, Cultural Survival booked me on the last bus out of Boston and into the only hostel still accepting  reservations, the Hosteling International in Harlem—which, out of 630 beds, had just one left. I arrived in New York City (for the first time in my life) at 3 a.m. in the center of Chinatown without
the ability to speak a word of English, save “taxi.” I had a note that said, “I need to get to my hostel, at this address. I do not speak English.” I made it, somehow, with just minutes to spare, on time for the meeting at 10 a.m.

The purpose of this meeting was to inform the Special Rapporteur of the 15-year fight for the right to freedom of expression for Indigenous groups in Guatemala. We emphasized the importance of the right to freedom of expression through community radio for marginalized Indigenous communities, and we explained the details of a bill that we have been attempting to pass in congress for years: Bill 4087, which would decriminalize community radio. After hearing our story, Anaya requested a summary of the bill and promised that he would look into methods to apply international pressure on congress through the Inter-American Commission on Human Rights.

In a subsequent meeting with Leo Castiho from the Office of the UN High Commission for Human Rights, I began in my usual way. I explained the history of the community radio movement in Guatemala, its successes and challenges. I spoke in detail about the process of building support among government institutions and congressmen, and the support that Cultural Survival has sought from UN officials. At the end, the two officials were practically speechless. “You’ve already done so much, I’m having a hard time thinking of what else to suggest to you,” Castiho said. The conversation wrapped with the conclusion that we’re doing everything possible within the framework of the United Nations. “Keep up the good work; you’re doing everything right,” they encouraged us.

Iona Thomas, head of Press and Public Affairs at the UK Mission to the UN, reinforced the importance of the freedom to have one’s own community radio and community voice. She shared with us the story of the fight for community radio in the US and the fact that last year a law protecting community radio was enacted. She offered her support and that of her colleagues, especially those in the UK Embassy in Guatemala. One of those colleagues, Natalia Caruso of the German embassy, said that we would be able to speak with the German Human Rights Department within the German Parliament about this violation of human rights. She also arranged a meeting with the European Union in Guatemala and proposed to write a document about these issues to share with various colleagues. I was also lucky to meet with the Permanent Forum representatives, Alvaro Pop, Denis from Nicaragua, and Arturo Requesens from the Secretariat.

Pop maintained that the issues of community radio be given priority during the Permanent Forum. Toward the close of the Forum I participated in a panel discussion, Freedom of Expression, The Case of Community Radio in Guatemala, where I denounced the persecution and criminalization of Indigenous community radio directors, operators, and volunteers. Among the attendees were Guatemalan congressmen Carlos Mejía, Flavio José Yojcom García, and Gregorio Luciano Nolasco Marcelino. Marcelino is also a representative of DEMI, a government institute that defends the rights of Indigenous women, CODISRA, the Commission against Discrimination and Racism of Indigenous People of Guatemala, and the Guatemalan embassy in the US.

While in New York I also had the chance to be interviewed on several radio stations. Following an interview with Clara Ibarra, coordinator of Spanish programming for Democracy Now!, Ibarra proposed that we share community radio contacts in Guatemala so that Democracy Now! may send news from abroad that the stations will be able to share.

The last stop on my international visit was San Jose, Costa Rica, where I represented Sobrevivencia Cultural at the first workshop of civil society organizations working toward the participation and integration of particularly marginalized, vulnerable, and excluded groups in Central America (PASIRCA).  I presented about our newest community radio project, which will be completed in collaboration with Tumul K’in Center of Learning/Radio Ak’Kutan of Belize and is an exchange between Radio Ak’utan, Radio Ixchel, Juventud, Sembrador, San Pedro y La Voz de Atitlan from Guatemala, and Radio Sensunat from El Salvador. Ours was selected from over 200 proposals by 100 organizations around Central America, and was the first project to be funded. In February we will be organizing a youth forum with youth from radio stations in Belize, Guatemala, and El Salvador.

The foundation of any democracy is an informed citizenry. In Guatemala, community radio is the best tool to provide rural, Indigenous Guatemalans with the news and information that we need in our languages. Join us in exercising our right to freedom of expression.

To learn more about the community radio movement in Guatemala and to take action, visit: goo.gl/MkFtKc.