Our Bodies, Our Spirits, Our Territories: Indigenous Women Take to the Streets in Brazil 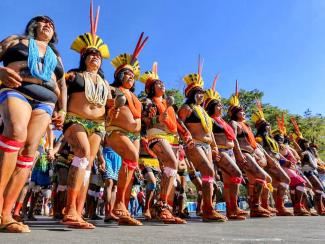 Mid-August in Brasilia, Brazil, Indigenous women took to the streets to protest escalating human rights and environmental violations under the Bolsonaro government. On August 12, hundreds of Indigenous women occupied Brasilia’s Special Secretariat of Indigenous Health to demand the resignation of its head, Silvia Nobre, who was chosen by the Bolsonaro government. Nobre was appointed to her position in April, and since then, the “More Doctors” program, which provides doctors to underserved areas, has been weakened, and the management team has been terminated. Indigenous Peoples began responding to these cuts to programs that support Indigenous health when 115 Indigenous people occupied the secretariat’s office for 2 weeks in July. At that time, the Ministry of Health and the secretariat co-signed an Adjustment Agreement of Conduct committing to fulfilling the demands of the Indigenous occupiers.

President Bolsonaro has proposed new healthcare policies in Provisional Measure 890. It replaces the “More Doctors” Program with “Doctors for Brazil,” which is a new program that aims to privatize health services currently offered by the United Health System, including the services offered under the National Policy on Indigenous Health Care. Provisional Measure 890 also proposes the establishment of a new social services agency, the Agency for the Development of Primary Health Care, which allows primary health care services to be privatized. Brazil’s Indigenous Peoples are concerned about the measure because it eliminates all avenues for public input and participation regarding how the agency is run and how it serves people. The supervision of the Agency does not include representation from the civilian National Health Council, but it guarantees the participation of private organizations.

Bolsonaro has not ensured that Indigenous Peoples will have a voice in how the Agency will provide health services to them, nor held accountable by them. Additionally, the development of this proposal has not included any consultation with Indigenous Peoples. Free, Prior and Informed Consent (FPIC) is a human right protected under the United Nations Declaration on the Rights of Indigenous Peoples and ILO  Convention 169, both of which Brazil has endorsed and ratified. Brazil’s Federal Constitution of 1988 also protects Indigenous Peoples’ rights. It recognizes Indigenous Peoples’ rights to their own “social structures, customs, languages, beliefs and traditions” and their “original rights over the land” that they have traditionally occupied.

Beyond Provisional Measure 890, the Bolsonaro government has continuously presented itself as a threat to Indigenous Peoples. In addition to numerous examples of hate speech, Bolsonaro has threatened to remove environmental protections for Brazil’s forests, eliminate constitutional land rights for Brazil’s Indigenous Peoples, and has encouraged the exploitation of the Amazon which has contributed to the ongoing fires decimating the rainforest. He has expressed blatant disregard and disrespect for the fundamental human rights Indigenous Peoples have to their lands and cultures.

However, the protests signify that Brazil’s Indigenous women are prepared to stand up and fight back against oppressive government action that does not recognize and respect their rights. Indigenous leader Sônia Guajajara, leader of the Articulation of Brazil’s Indigenous Peoples (APIB), stated, “Submission is not culture. We are here to demystify the idea that Indigenous women do not participate in this struggle and to demonstrate that we are prepared to occupy any space.” 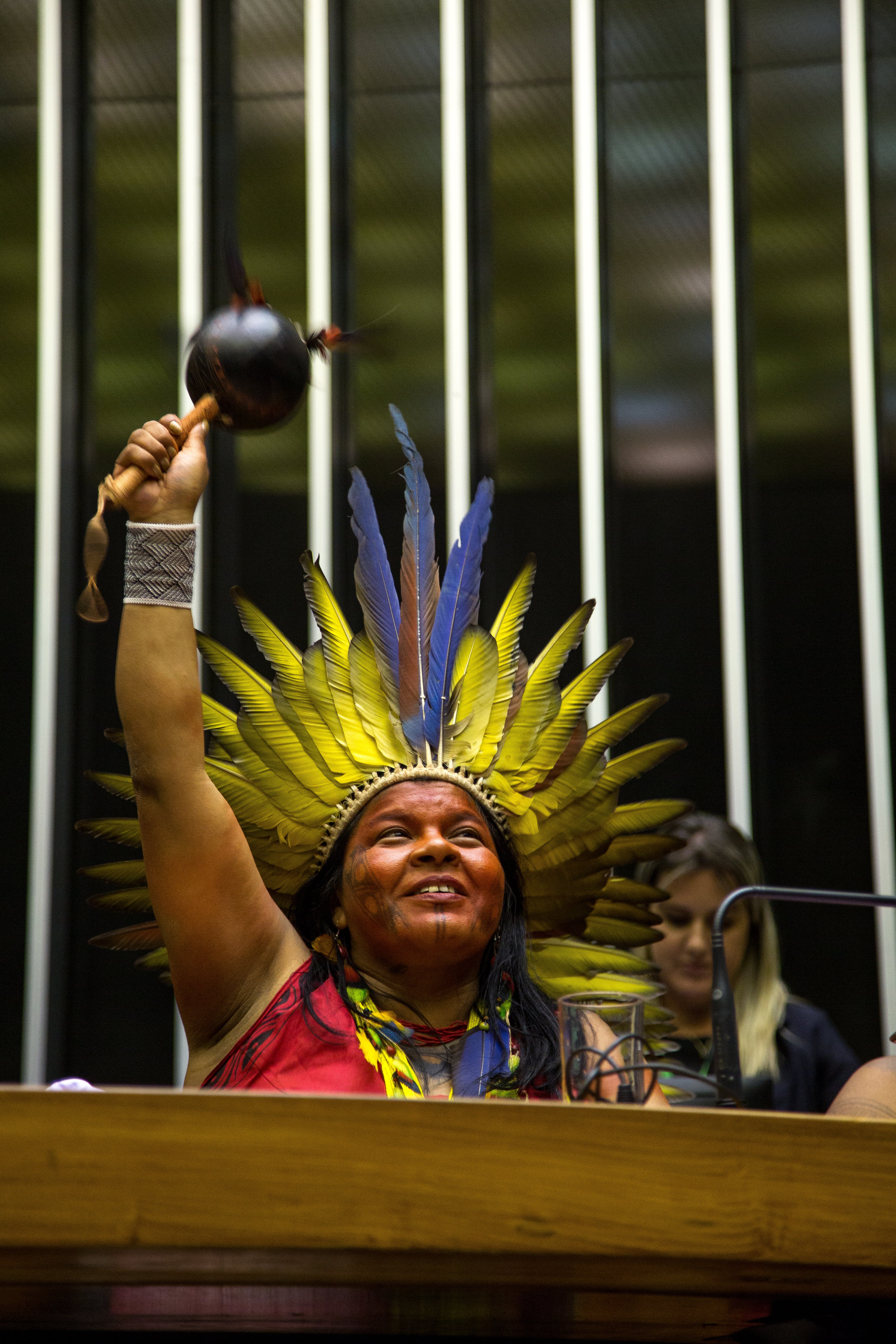 After the women’s march in Brasilia, many women entered Congress, where leaders like Sônia Guajarara addressed the plenary. Photo by Katie Maehler/ APIB Comunicação.

Building on the momentum of the August 12 occupation, the next day, nearly 3,000 Indigenous women marched on Brasilia for Brazil’s first Indigenous Women’s March. The march, called “Territory: our body, our spirit,” was organized by Brazil’s National Indigenous Movement and the Articulation of Brazil’s Indigenous Peoples in response to escalating violations of Indigenous rights under the Bolsonaro government, especially in regards to healthcare and protection of the environment. Guajajara said, “It’s very important to be here in Brasilia to show the world that Indigenous women are resisting attacks on our rights and the rollbacks of this government. We are staging our first women’s march counting on the presence, visibility, strength, and spirituality of Indigenous women. We are all warriors on the frontlines of this struggle against today’s political situation, which is so adverse to our Peoples. We also aim to raise awareness among the international community to build support for Brazil’s Indigenous Peoples. This is a global movement, a planetary movement.”

In addition to the 110 ethnic groups represented from Brazil, the march also included Indigenous women from other parts of the Amazon, including Waorani leader Nemonte Nenquimo and Kofan leader Alexandra Narvaez from Ecuador. Nenquimo said, “As women, we share the same vision. We want to continue organizing and uniting so that our cultures, our ancestral knowledge, and our right to life will be respected. We are fighting in the face of the enormous threats to our lands and lives. Around the world, the  governments are trying to kill us. They want to exploit our lands with no regard for us as human beings. Yet, we are the guardians and owners of our territories, which we have cared for and protected for thousands of years. We want to protect our land for the future generations. We want our forest to be free from contamination, free from destruction.”

Leila Salazar-López, executive director of Amazon Watch, said, “As Bolsonaro and the Brazilian government attempt to dismantle fundamental Indigenous rights and open Indigenous territories to devastation, he faces resounding resistance from a movement led by women who best understand the importance of defending rights and territories for the health of Mother Earth and future generations. This week’s women’s mobilization is a critical step forward in mounting effective opposition to the attacks of the Bolsonaro regime. The international community has a moral duty to stand in resistance with these Indigenous women Earth  Defenders who are defending their rights, lives, and the Amazon rainforest for our collective benefit.” 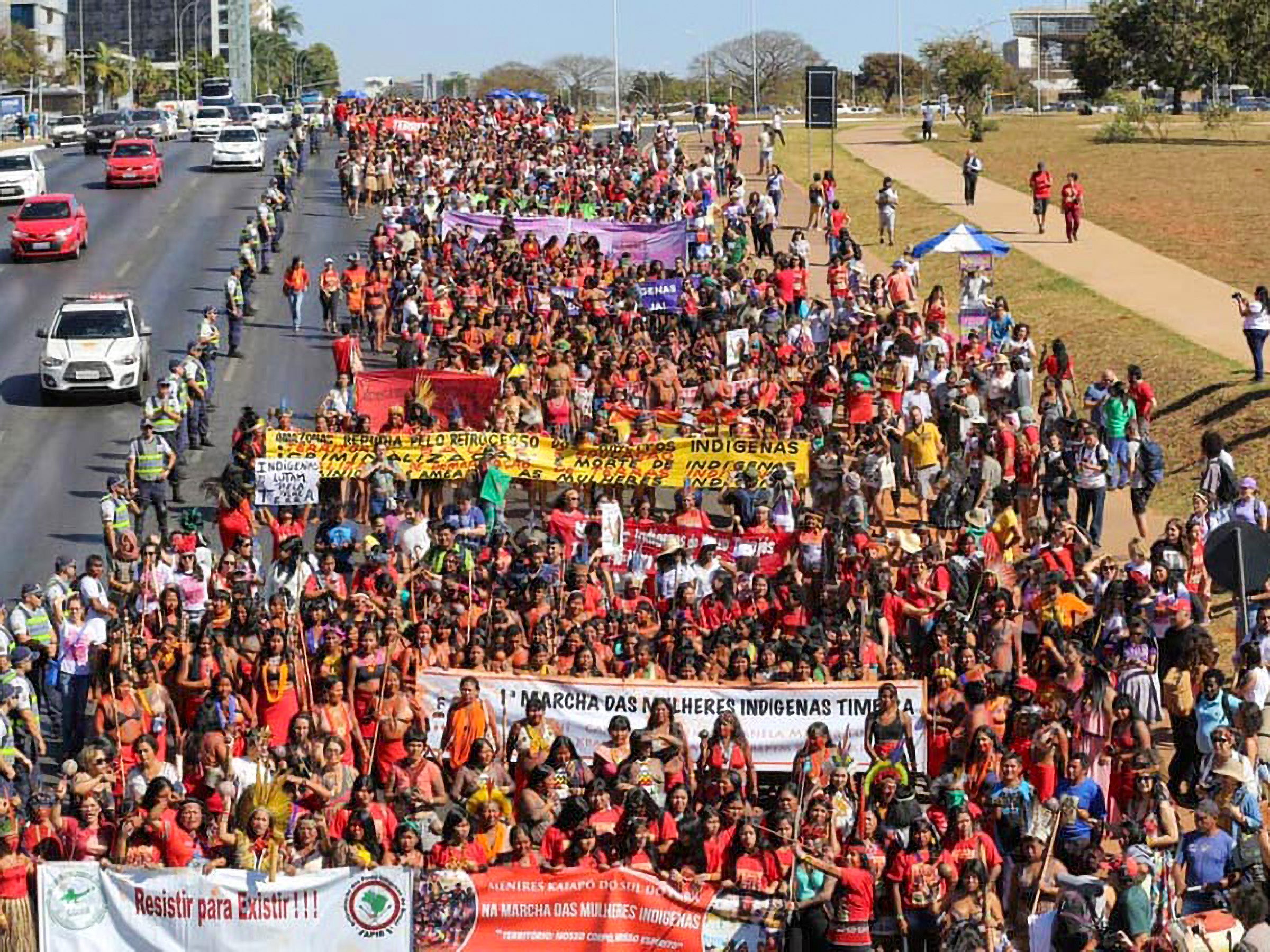 On August 14, the Indigenous Women’s March ended by joining with the Margaridas March, a mobilization of 100,000 of Brazil’s female rural workers. From the final statement of the Indigenous Women’s March: “As women, leaders and warriors, bearers and protectors of life, we will stand and struggle against the issues and violations that afflict our bodies, our spirits, our territories. By spreading our seeds, our rituals, our language, we seek to guarantee our existence. We are totally opposed to the narratives, proposals, and actions of the current government, which has made its intention to exterminate Indigenous Peoples explicit. This government has made the genocidal exploitation of our territories by capital its aim. This manner of governing is akin to pulling a tree from the ground and exposing its roots until everything dries out. We are grounded in the earth, because that is where we seek our ancestors, and the earth provides our nutrition and life. That is why for us, territory is not a good that can be sold, traded, or exploited. Our territory is our life, our body, and our spirit.”

Célia Xacriabá of Articulation of Brazil’s Indigenous Peoples issued this statement about the march: “For the first time in history, the Indigenous women’s march convenes more than 100 different Peoples in Brasilia with more than 2,000 women present. This is a movement that is not only symbolically important, but also historically and politically significant. When they try to take away our rights, it’s not enough to only defend our territories. We also need to occupy spaces beyond our villages, such as institutional spaces and political representation. We call on the international community to support us, to amplify our voices and our struggle against today’s legislative genocide, where our own government is authorizing the slaughter and ethnocide of Indigenous Peoples. This is also an opportunity to join our voices to denounce this government’s ecocide, where the killing of mother nature is our collective concern.”

Top photo: The historic First Indigenous Women’s March brought together close to 3,000 women from
over 100 Indigenous Nations from all over Brazil. Photo by Midia India.