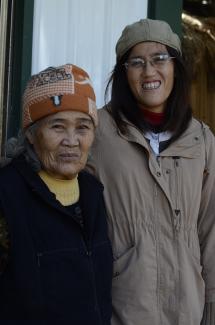 In Taiwan, “Oppose Meiliwan” has been the battle cry of a wide-ranging coalition of eco-activists, Indigenous rights groups, and everyday citizens for more than a decade. Meiliwan, which means “beautiful bay,” comes from the Chinese name for the Miramar Resort Village, a five-star beachside property development at the tiny seaside hamlet of Shanyuan. In 2004, Taitung County awarded a 50-year contract to Miramar Hotel Co. for the project. Ever since, it has been a cause célèbre for tourism boosters and their opponents.

Sinsing is a 37-year-old resident of Shanyuan and an accidental activist. She is a member of the ‘Amis tribe, the largest group of Taiwan’s Indigenous Peoples, and in her language her village is known as Fudafudak, a name that comes down from the ancestors. Some elders say it is that sparkling look of the sun shining on the sea. Others say it describes the glimmer of the sand on the beach, or the sight of sand drifting along the shore as it is blown by the northwesterly winds. But after all the publicity the hotel has received, everyone simply calls the village Meiliwan.

A decade ago Sinsing’s family received an eviction notice advising them to tear down their house and leave, with no explanation offered. Later she learned of the plans for the Miramar Resort Village and how her family’s home of 80 years occupied a parcel of land destined to become luxury villas in the 6-hectare resort complex. On October 28, 2014, as one of 14 plaintiffs in a case against Taitung County, Sinsing won a ruling by the Kaohsiung High Administrative Court to revoke the environmental impact assessment that allowed the developers to work on the site. The ruling was the latest of many court victories that temporarily halted construction. Despite a decade of orders to desist, however, Taitung County’s pro-tourism development authorities continued to grant construction permits to the developers and the Miramar Resort Village’s hotel stands nearly complete at the water’s edge.

Your successful lawsuit was the latest to bring the Miramar Resort Village project to a halt. How did you get involved in the “Oppose Meiliwan” movement?

Sinsing: I started out as a victim. Today I’m in the media spotlight because of the lawsuit. A local resident had to sign the court papers as plaintiff, so I signed my name. I got pushed out front. The effort to prevent the construction of the Miramar Resort Village has gone through many stages, and at every turn new groups of protesters appeared and somehow managed to work together.

How did you learn the craft of dissent?

Sinsing: In the village, we didn’t know anything about protesting. But we learned as we participated in meetings and events held by the environmentalists. Then artists from Taitung City joined this cause. From them, we learned how make banners and use words and images to communicate our message. We learned how to give speeches and hold talks at schools and social organizations. Then came talking to the press. We started holding press conferences; that required a press release, and I would be one of the people involved in that. Beforehand we would work on our message and decide how we’d answer questions when interviewed by the media.

Was there any indication of legal action if some decided to resist the eviction orders and stay on their land?

Sinsing: We wondered what would happen to some of the elders if they were forced to tear down their houses and leave. Where would they go and live? Would the government give them any support? The eviction notices appeared out of nowhere. We didn’t even know who was behind them, and only later did we learn of the plans for the hotel. To authorities, it was like, ‘Ah, only a few households are being evicted, and some people will lose their vegetable gardens.’ It was as if none of us had been living here for generations. It was as if a new colonial power had descended upon us and come to rule us.

Some say that the construction of the Miramar Resort Village highlights the lack of clarity over Aboriginal land rights in Taiwan.

Sinsing: This hotel is seven stories high and has a multi-level basement. How could the government allow such a massive structure to be built on slope land facing the beach? It is right on Aboriginal land. If we Indigenous people want to improve our homes, it is not permitted. Our government’s land policy is strictly for the benefit of the wealthy, and is of no use to local people like us. To me, it seems that we, the people who live here, have no basic human rights. The developers did everything they could to evade regulations. The hotel was built without getting a prior environmental impact assessment. Everything was done completely backwards. They tell us that with the hotel here, we no longer need to rely on the natural resources of our stretch of shoreline for our livelihood and that we will all have jobs. But what kind of jobs will we have? Sweeping and cleaning, most likely. The young people who have stayed in the village do not have college degrees. They won’t be offered management positions.

What other impacts has the Miramar Resort Hotel had on your culture?

Sinsing: The ‘Amis have an oceanic culture that goes back thousands of years. Take, for example, our ocean worship festival. Every July our young men return to our village and go down to the beach and study the waters and the animals that live in it, and learn the names of the rocks along the shore and reef. Some traditional names tell where food is to be found. How can this custom survive if we lose access to the beach? If the hotel opens for business, we don’t even know if we will be allowed on what was once our beach. Will my older brother or father or uncles or mother be allowed to walk along the beach to visit neighbors on the other side? What effect will this hotel and the tourists have on the local ecosystem? It will destroy our old way of life. We consider ourselves—our tribe—and nature to be one and the same.

How did the protest become a nationwide cause?

Sinsing: Our courts say the hotel project is an illegal development, but the government acts as though it is legal. To everyday people, that is unfair. Taitung County is promoting tourism and claims that tourism will make everyone’s lives better. [And] our village is not the only place where this is happening. Developers have drawn up plans for resorts all along the east coast. To us and to the outsiders who have joined our protest, our thinking is that if the developers can get away with building an illegal hotel complex here in Fudafudak, then the same will happen along the entire east coast. This coast is not just for us local people, it is for everyone. People from all over Taiwan come here to vacation and enjoy the beauty of nature...the mountains, the forests, the beaches. If the developers’ plans come to fruition, all of this will be lost. The trees and natural vegetation have been bulldozed, and the stream running down to the beach was diverted. The original habitat has been destroyed and cannot be restored. This is an illegal hotel and it should be torn down. If we let this illegally developed hotel be built, what are we going to tell our sons and daughters?

— Glenn Smith is a contributor to the Cultural Survival Quarterly residing in Taiwan.

Image: 'Amis activist Sinsing with her grandmother, Miarde, in the village of Fudafudak, Taiwan. Photo by Glenn Smith.